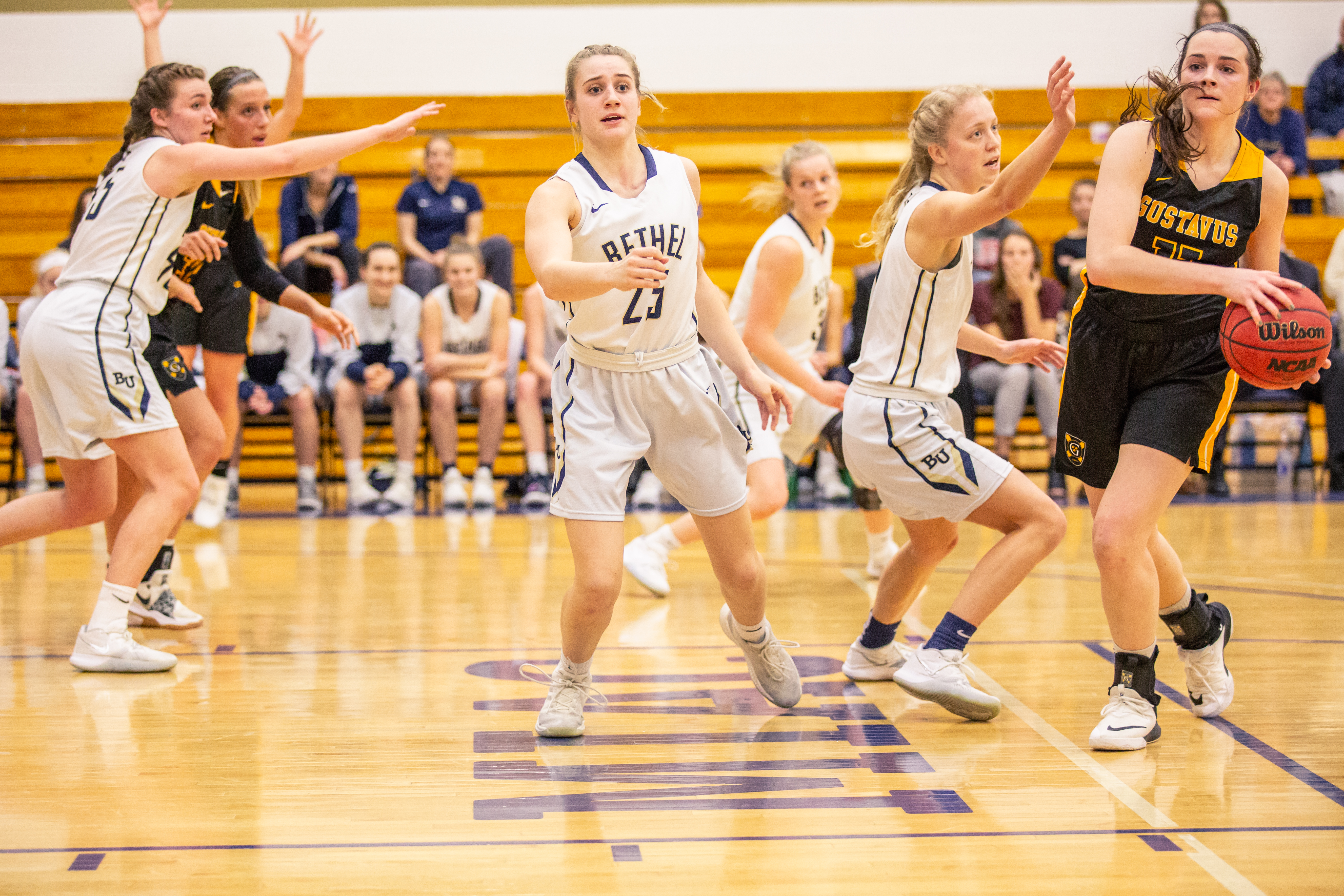 In a matchup of high-seeded MIAC teams, Bethel’s defense makes a statement in the win.

Swarming hands. Moving feet. Pressuring each possession. On a typical, cold Wednesday night in February, the Bethel Royals had the Gustavus Gusties feeling the heat all game long. The ever-present defense led the charge to a convincing win for the Royals as they locked up the third seed in the MIAC playoffs, defeating the fourth-place Gusties 68-48.

The home Royals began the game making their presence known on the defensive end of the floor. With starting guards Bella Williams and Haylee Barker disrupting passing lanes on the press, the Gusties scored a season-low seven first quarter points. But more shocking, they had more turnovers, nine, than total points scored.

Second quarter action didn’t show much improvement for the visitors. They were held without a field goal until the four-minute mark and ended up scoring another seven points in the frame.

The 14 point halftime total was the lowest of the season for Gustavus, and they trailed Bethel 33-14 at intermission.

The pressure continued into the second half and the Gusties could not get into any offensive rhythm. They finished the contest shooting 30% from the field and racked up 27 turnovers, 12 more than their season average.

After the game, Coach Jon Herbrechtsmeyer praised his defense for their continual pressure put on Gustavus.

“We stayed the course,” Herbrechtsmeyer said. “We continued to do what we do. We got them sped up and that led to easy baskets.”

As tenacious as the Royals’ defense was all night, they were not perfect offensively. Bethel ended the game with 26 turnovers, seven more than their season average of 19. But that seemed like it was a non-factor with how their defense masked their sloppy play. Forwards Taite Anderson and Makenna Pearson led the scoring with 14 apiece, with center Hannah Johnson adding 13 points and a game-high nine rebounds.

Williams also led the team with four steals on the night.

This game marked the end of the home schedule of the regular season for the Royals, with one more game at Hamline on Saturday before the MIAC playoffs begin on Tuesday at the Robertson Center.

Even though that game will not impact their playoff seeding, Herbrechtsmeyer said that he will decide sometime tonight whether he will play his starters in the game at all.