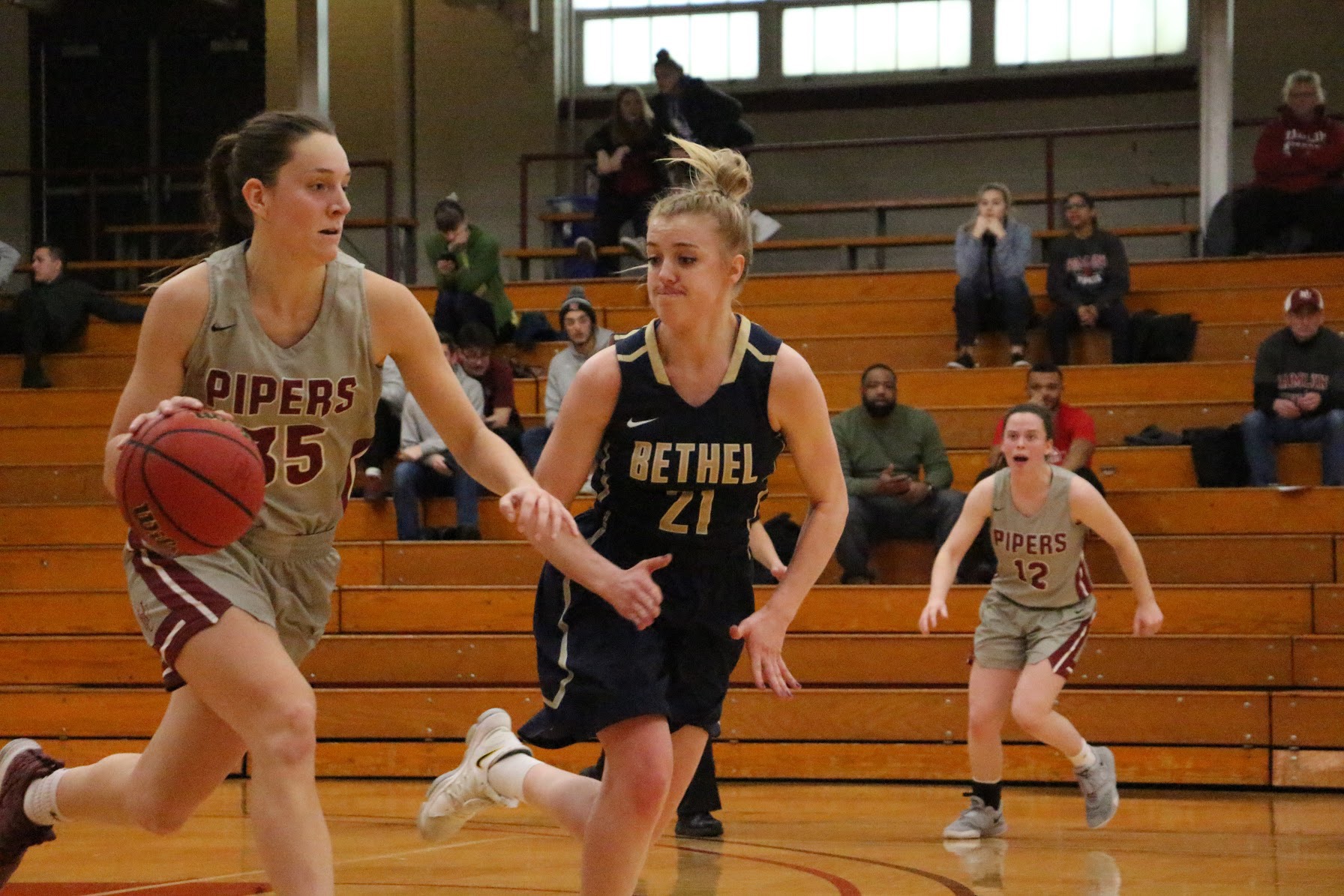 The men’s and women’s basketball teams finish the regular season with road victories and will each host the first round of the MIAC playoffs.

I don’t know what you would imagine those numbers to mean, but I’m guessing it wouldn’t be the number of turnovers each Bethel opponent had in those eight games.

“Last March, our captains came to me and asked, ‘what is it that we can do to make you less frustrated?’,” Herbrechtsmeyer said. “I told them to believe in what I was asking them to do on the defensive end. This is a culmination of work since last March.”

The Royals went on the road and forced Hamline into 33 turnovers Saturday en route to a 89-55 win, a win that meant nothing in the standings to Bethel but everything to the Pipers–a win for the home team meant a likely playoff berth.

That’s no surprise; Johnson and Anderson are the team’s leading scorers all year. But the players heavily responsible for all those turnovers are unsung more times than not.

Junior Haylee Barker, sophomore Bella Williams and freshman Tessah Anderson form a trifecta of agility, quick hands and relentless pursuit of the basketball. They spearhead a defense predicated on the full-court press, in which every major rotation player averages at least one steal per game.

With Hamline playing for their playoff lives, Bethel needed to respond to that energy in the first quarter; they did the exact opposite, trailing 17-15 after the first frame.

“They came out with the energy I thought they would,” Herbrechtsmeyer said. “It’s a good lesson for our kids, hey, this is tournament time.”

The rest of the way it was all Royals everything. Each quarter became increasingly fast-paced, with Bethel scoring 43 points off of turnovers in the game.

The Royals are the third seed in the MIAC playoffs and will host St. Mary’s on Tuesday evening as part of a women’s/men’s postseason doubleheader.

The senior knocked down six bombs on the day, totaled 22 points and propelled Bethel into the third seed in the MIAC playoffs, which begin on Tuesday.

The Royals shot better than 50 percent from beyond the arc Saturday, scoring 89 points. Granger Kingland added 18 points on four triples while Jack Jenson poured in 18 and Derek Magnuson added 14.

It took overtime to defeat Hamline last time these teams met, but for most of the game Bethel controlled the scoreboard. They owned a 41-20 halftime lead and though it got back to a 13-point advantage, the fourth-highest scoring offense in the conference kept the Pipers at bay.

Bethel finishes the regular season with a record of 18-7 and will face Gustavus on Tuesday in the first round of the MIAC playoffs.

0 comments on “Bethel basketball sweeps doubleheader at Hamline, looks ahead to playoffs”