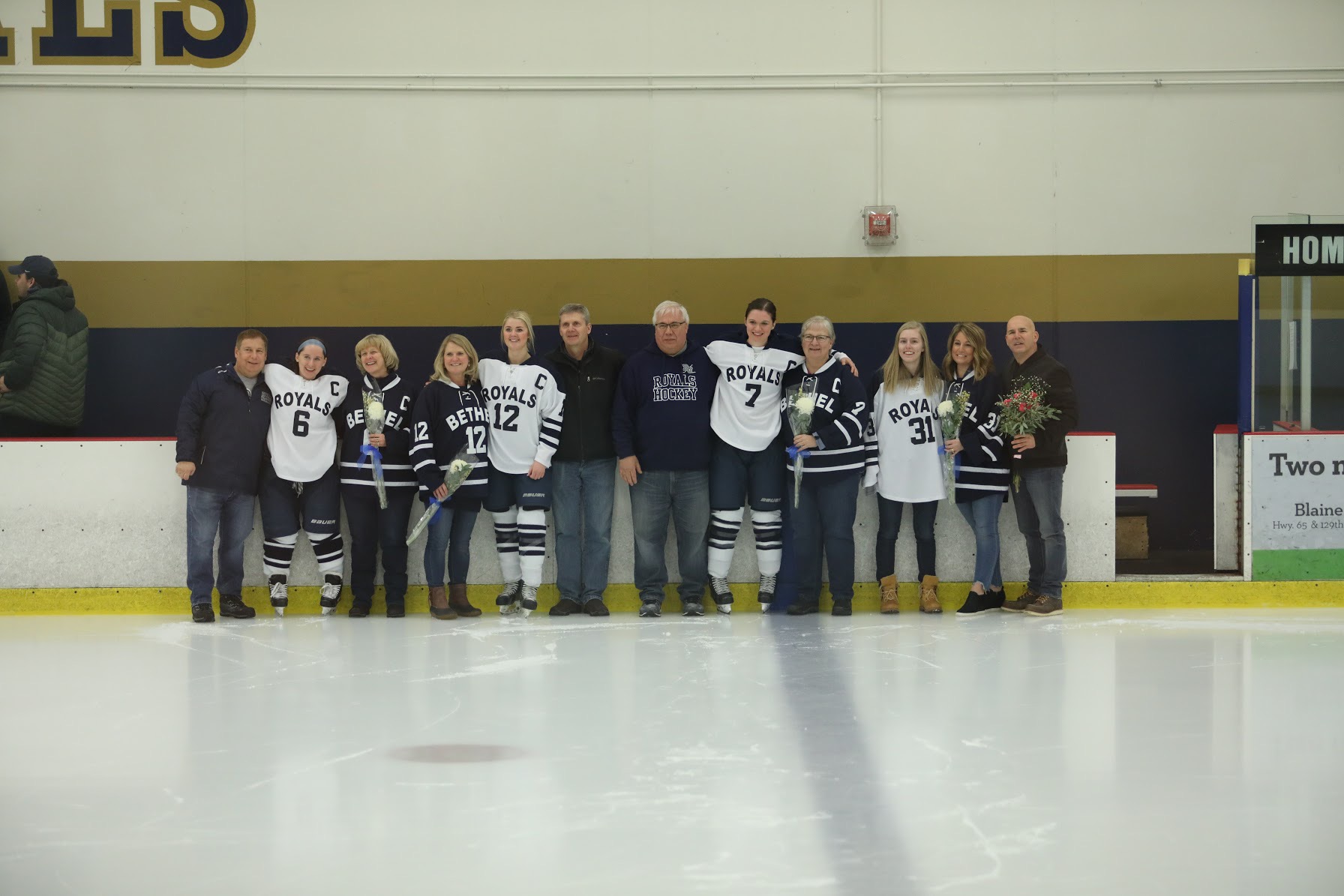 As Bethel celebrates one class of athletes moving on, hope of the next springs forth.

As parents holding bouquets, with a flower as white as the ice they stood on, lined the home rink for senior night at the Bethel University Arena in Blaine, the game began with a celebration.

Not one based on a win, but of four women who were about to take the home ice for the final time. With the Royals out of contention for the MIAC playoffs, Friday night’s tilt against Saint Catherine’s shouldn’t have meant much on the frozen surface.

But for Erika Geary, Sarina Goos, Kirsten Olson and Lauren Topor, it meant the last time skating competitively with their teammates. All of the women playing their final home game, except Topor, who was not in uniform, were in the starting lineup as the Royals took on the Wildcats.

In the first period, it was sophomore forward Bri Stafne who provided the early spark on senior night, going down the ice unassisted and firing home a goal to give the Royals a quick 1-0 lead. That goal by Stafne broke the tie with forward Bailey Thompson for the most goals scored on the season, with nine.

As the score remained 1-0 going into the second period, the fans were still finding their seats when, not even 30 seconds in, the Wildcats tied the game 1-1. Five minutes later, after a 2-on-0 breakaway attempt failed for St. Catherine’s, they got another opportunity to take the lead and they capitalized. The puck rifled past the glove of freshman Royals goalie Malory Tidona and into the net, giving the visitors a 2-1 lead.

With the second period coming to an end, Stafne continued to add to her team-lead in goals. She penetrated towards the net and, with an eye to the top corner of the net, shot the puck by Wildcats goalie Sam Klemann’s glove, tying the game a 2 a piece.

A 2-2 score continued into the third period, where things began to get chippy. Midway through the frame, Stafne was thrown down to the ice in a hard collision with a Wildcat. As a result, she remained on a knee in the corner of the rink, eventually helped off the ice and walked gingerly back to the locker room.

Multiple unsportsmanlike penalties ensued from both teams and the drama in the game led to overtime.

In the five-minute overtime frame, another hard collision took place, this time between Royals defensemen Annika Swanson and Wildcats forward Brede Postier. Swanson had to be helped to the penalty box, as she was given an interference penalty.

By the end of overtime, the score remained 2-2 and that’s how it ended–a tie.

One last postgame prayer huddle around center-ice capped off the 2018-19 home season for the Royals.

After the game, the senior forward Geary said that besides the lifelong friendships she has from the team, she learned a lot from her career at Bethel, even more than just winning on the ice.

“I’ve learned to battle through times of greatness, with winning the MIAC, and when I’m down,” Geary said. “It’s prepared me for life in general.”

With these seniors now departing from the team, coach Brian Carlson is grateful for the time they’ve put in with the program.

“These girls [seniors] are wonderful,” Carlson said. “All four years they have been committed to the program. We’ll miss them a lot.”

He also added how going into next year, he sees potential in this relatively young group of women.

“With 14 first-year people, there were some growing pains [this year]. We’re optimistic going forward.”