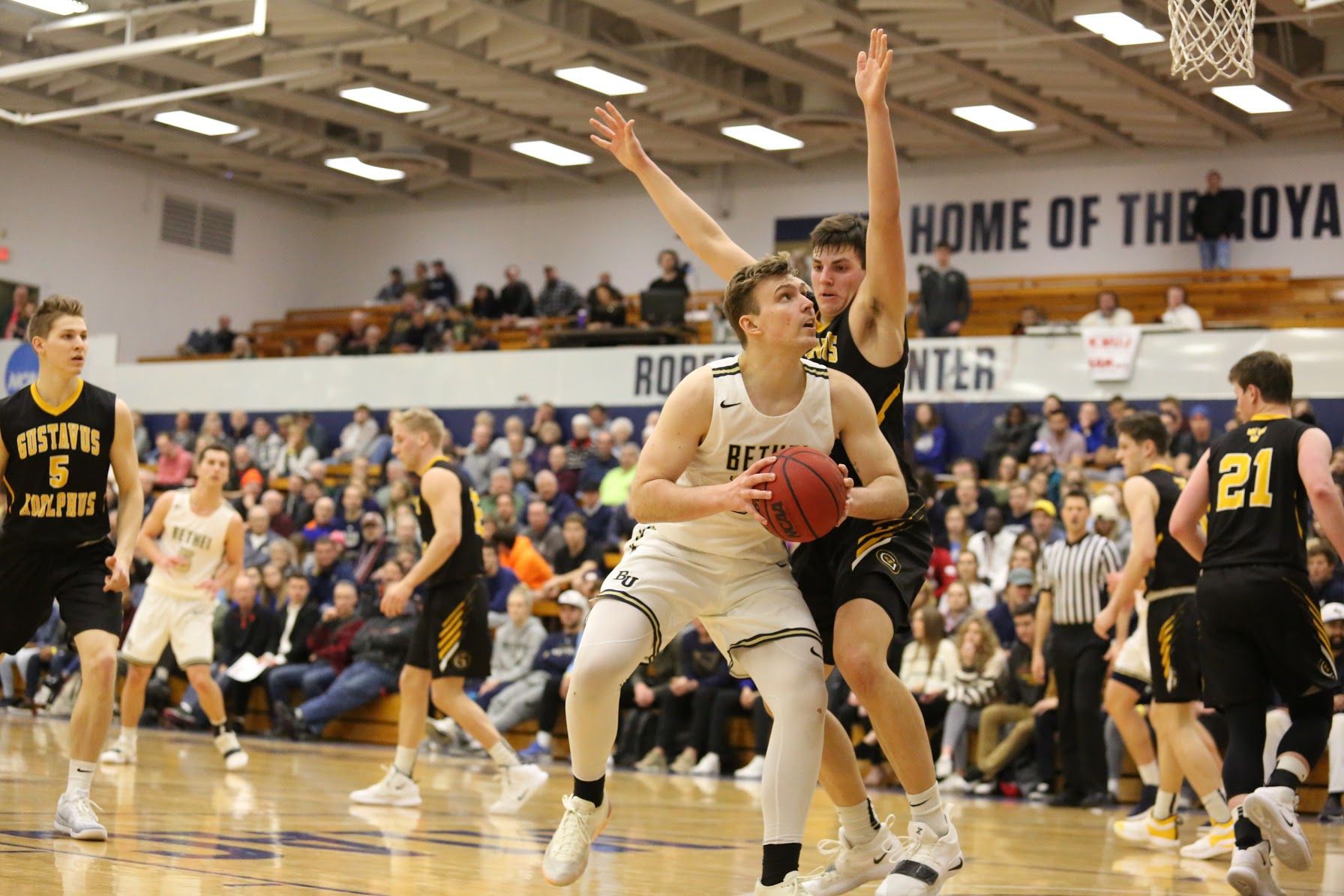 Both the Royals’ men’s and women’s basketball teams now entered a new phase to their season: playoff basketball.

And fans know that.

With turnovers being thrown around left and right, Bethel takes over late and punches its ticket to Augsburg.

First up, the women’s game against the Saint Mary’s Cardinals.

Originally, rather than cheering, the Bethel crowd sat silently. Heads of Royals fans were either being tucked inside their palms or shaking profusely.

As the game began, turnovers spread like a virus to everyone on the court. At one point, already frustrated coach Herbrechtsmeyer yelled loud enough for practically the entire city of Arden Hills to hear.

“Shoot the basketball,” he screamed to a open Hannah Johnson in the corner.

Sixth-seeded Saint Mary’s just recorded the unofficial decibel record for the game after an and-one layup, preceded by two consecutive Royals offensive fouls. Fans dressed in cardinal-red stood up and cheered, as if to rub it in the faces of the quiet fans dressed in navy and vegas.

Tessah Anderson jumped in front of a pass as the Cardinals were pressed in the backcourt and took it the distance for an uncontested layup. Finally. Some normalcy to the game that many expected to be a convincing win for the Royals.

Then it happened again. Tweet! And a foul. The sound barrier was broken once more, but now it was from the home crowd that made its first impact on the game.

However, when Bethel had momentum, the simple aspects of the game seemed the most complicated. For a team that averages 19 turnovers a game, the Royals almost matched that total in the first half with a whopping 17. St. Mary’s wasn’t that much better, though, committing 15 unforced errors.

The stale energy continued into the third quarter. Scoring became hard to come by, and therefore the game became tight. Bethel held on to a 41-38 lead heading into the final frame.

An intense atmosphere starting the fourth quarter as the game hung in the balance. The fans were louder. The stakes were higher.

All year long, the Cardinals have struggled in the fourth quarter. For the season, they have a -83 point differential in the final frame, and the Royals looked to expose those late-game struggles.

For the spark the Royals were searching for, they looked no further than junior point guard Haylee Barker. Up 52-43, Barker laced a crucial three-pointer that gave her Royals a lead of a dozen. Immediately after, she stole a pass and took it in for a layup, igniting the crowd that had been silent for most of the night.

The fourth quarter energy led to a 66-52 Bethel win.

In the span of one quarter, a whole season’s worth of growth became evident to those watching Barker play.

“Haylee Barker’s emergence this year is nothing short of miraculous,” Herbrechtsmeyer said postgame. “She has been lights out for us.”

And she notices it too.

“My dad always told me growing up I was the floor general,” Barker said. “Last year I was more timid. This season I have more confidence in my role.”

To go along with Barker’s performance, forward Taite Anderson had a team-high 17 points, and center Hannah Johnson totaled a game-high 16 rebounds.

The Royals now advance to the MIAC semifinals and go on the road to play the Augsburg Auggies Thursday night at 7 p.m.

An offensive outburst in the first half helps send the Royals to the second round of the playoffs.

From the opening tip, Bethel was firing on all cylinders.

The ball swings out to Tyler Barker on the three point line. Bang.

The ball makes its way to Derek Magnuson in the post. Bang.

“He provides a presence in the middle of the floor from one rim to the other and it consumes the defense,” coach Doug Novak said on the Bethel big man. “At times our outside shooters are the beneficiaries.”

Despite the Gusties best efforts from their bench, which saw them contributing 18 points in the first half alone, they could not dig themselves out of the hole the Royals put them in early.

Meanwhile the Royals kept their shooting going throughout the second half. They finished the game shooting 50% from three and 53.7% from the floor.

Coach Novak praised his players for their offensive consistency, which led to success on the defensive end.

“It’s nothing special but it’s how we play that makes it special,” Novak said.

Gustavus forward Nolan Malo had 12 points while going at it with Derek Magnuson, who had 15.

The teams shot a combined 53 three-pointers.

The Royals advance to the next round of the MIAC playoffs, facing a road game at St. John’s on Thursday at 7 p.m.

Magnuson is looking to help keep the Royals’ hot streak going after winning their 11th game in a row.