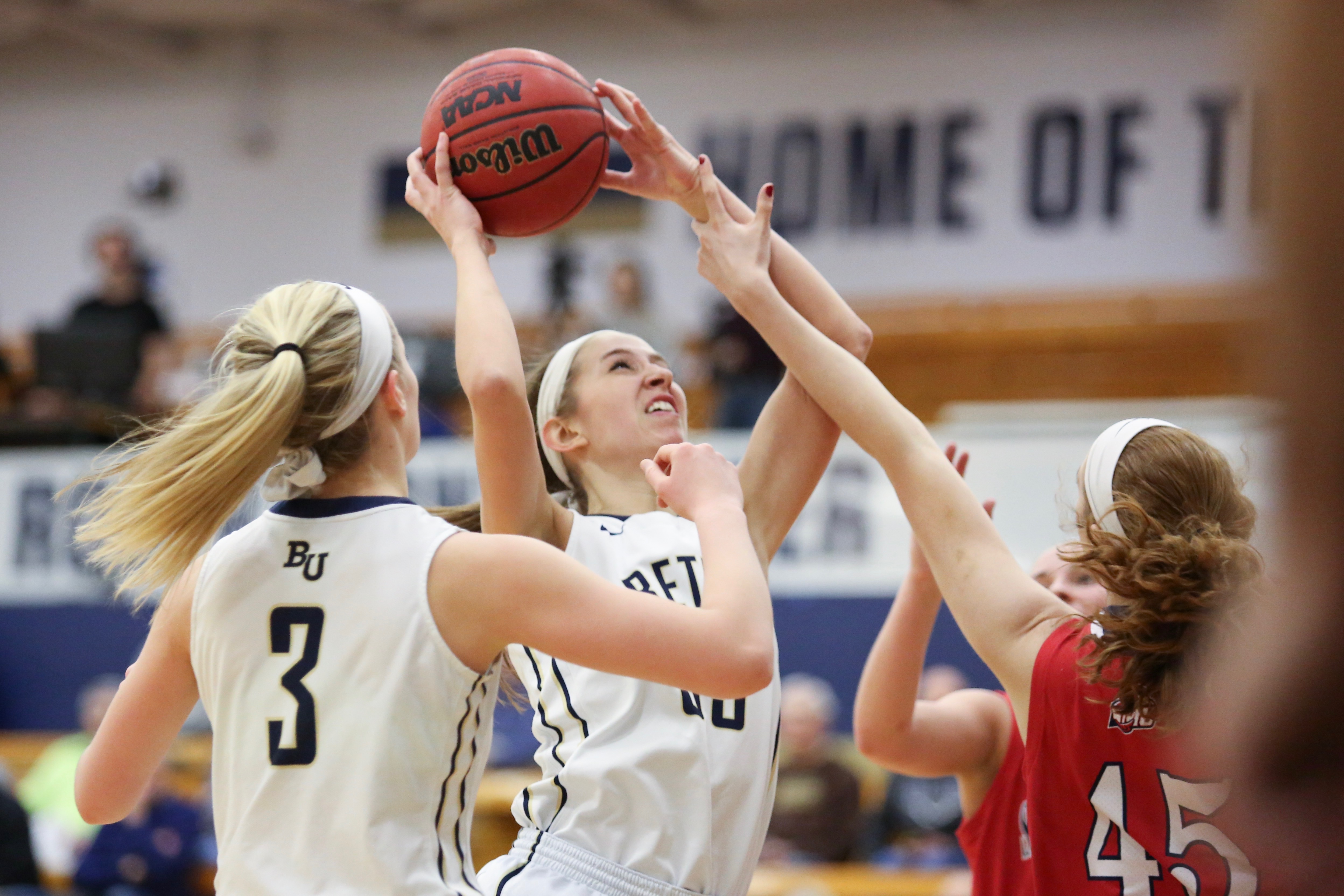 Bethel women’s basketball concluded another 20-win season in the MIAC semifinals at Augsburg.

The lights in Si Melby Hall have gotten brighter over the years. The recently reduxed floor boasts the shadow of the Minneapolis skyline on one side. The air is heavy with tension. Emotions are running high in the Minnesota Intercollegiate Athletic Conference women’s basketball semifinals.

In a game of momentum swings, long scoring runs and crucial plays that matter ten times more in hindsight than they feel like in the minute they’re happening, the Bethel women’s basketball team fought for a win against second-seeded Augsburg. They couldn’t cut through that air to advance to the conference championship, losing by a score of 79-70.

“I’m not sad we lost, I’m sad that it ends our season,” head coach Jon Herbrechtsmeyer said. “This team is really special.”

The Royals jumped on Augsburg quickly, going inside to senior Hannah Johnson for two early baskets and collecting a 9-0 lead just three minutes in. She finished with a team-best 24 points on the game. Then Auggie guard Tamira McLemore countered with three shots from deep to take the lead.

From that point on, the game became a battle.

Things began to look dicey for the third-seeded Royals as the home team lead grew to 46-35 and the home team fan contingent grew to tens of decibels. But as Naismith’s Second Law states, basketball is a game of runs. Bethel had a bit more juice to use up before this one hit the final buzzer.

A 22-11 burst over an eight-minute stretch from third quarter to fourth tied things back up at 57, and then the Royals took a 63-59 lead with five minutes to go.

A missed Royal layup packaged with Augsburg’s Arianna Jones knocking down a triple to go back in front was the final turn of the tide, and the Auggies never looked back, outscoring Bethel 20-7 since the Royals took that four-point lead.

So where do things go from here? Center and double-double averager Hannah Johnson is the lone senior on the team. Her presence will be missed in the paint. But the rest of the team is poised to return, led by junior forward Taite Anderson, who scored 20 points before fouling out in the fourth quarter, and junior point guard Haylee Barker, a dynamic assist-creator and on-ball defender. The rest of the rotation was filled by sophomores and freshmen this season, a symbol of good things to come for Herbrechtsmeyer.

“How can I be upset with a 20-win team that’s so young?” he said. “It’s pretty amazing what they’ve done this year.”

0 comments on “Bethel plays a game of runs, falls to Augsburg in MIAC semifinal”