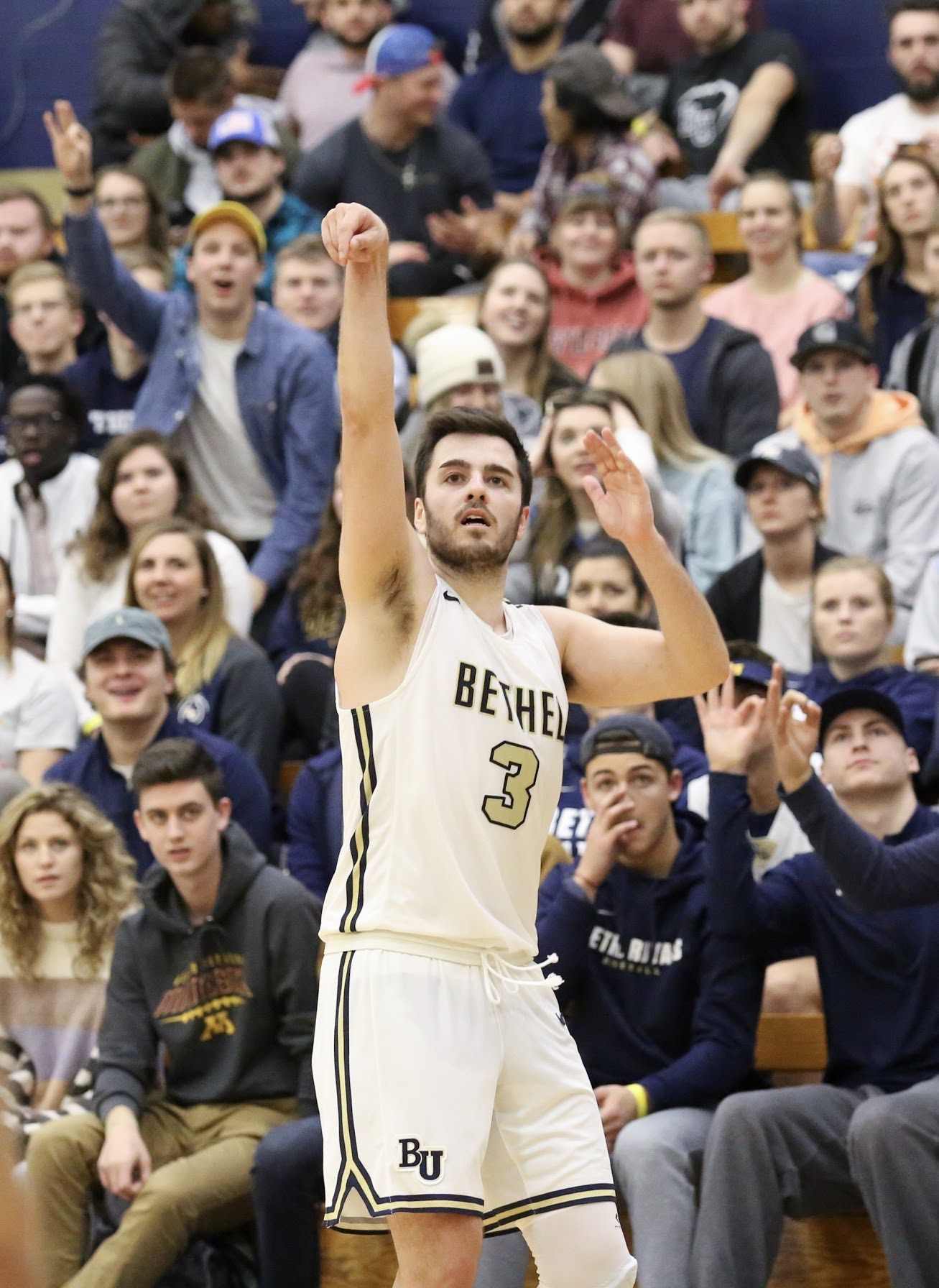 A 90 minute drive up Interstate-94 provides a scenery that morphs from urban to rural.

But in all that change, the commonality of basketball excellence is what brought Bethel and St. John’s together Thursday night for a MIAC semifinal matchup.

The stage was set. A sea of red laced the backdrop and the intensity of the game settled like a fog onto Sexton Arena in Collegeville.

This was the third meeting this year between these conference rivals, as they split the previous two meetings with both home squads coming away victorious.

Even though the Royals last came to Collegeville in November, the Johnnie students made sure to let the visitors know that they were entering a hostile environment.

Hours before the game, all around the campus in Collegeville, banners hung displaying the verse “Amos 5:5,” which in the Bible said, “Bethel would be reduced to nothing.”

And in the first half, the Johnnies lived up to that prophecy.

“SJU” chants bounced off the walls inside Sexton, led by red face-painted mascots lining the baseline with their only intent being to disrupt the visiting Royals.

Early on, St. John’s used their size to their advantage, collecting 23 first-half rebounds and 11 second-chance points. 6-foot 6-inch forward Zach Hanson and 6-foot 8-inch Lucas Walford were challenging shots and securing virtually every rebound, not allowing Bethel to have any second chance opportunities to score.

The Johnnies jumped out to a quick 17-6 lead, using those second chance opportunities from their big men. Walford totaled 10 rebounds in the first half alone.

Along with their size advantage, St. John’s used its long-range shooting to add to their lead. They shot 50 percent from downtown, akin to the first meeting of these teams where the Johnnies shot a whopping 71 percent from deep.

In order to keep the game close, Bethel needed to convert on the shots they should make, like layups and mid-range jump-shots. They did neither well in the first half. Four missed layups and countless one-and-done trips kept Saint John’s in the driver’s seat for the majority of the half.

That early momentum and energy carried the Johnnies to a 37-18 halftime lead.

With the halftime break coming at just the right time for the Royals, they hoped the 15-minute break would cool off the hot Johnnies.

Instead, the rested, home squad continued to execute its game-plan to perfection.

Walford continued to man the middle and collected a game-high 15 rebounds, along with 14 points on 60 percent shooting. The shooting remained as hot as ever for the Johnnies, hitting on 50 percent from beyond the arc for the game.

Leading scorer, senior guard David Stokman, had a quiet 12 points and four rebounds, but his swarming defense on Bethel guards Jack Jenson and Matt Ambriz went unnoticed on the stat sheet, but ostentatiously appeared on the court.

Along with Walford and Stokman, the Johnnies had four scorers in double-figures for the game and doubled up the visitors with 16 bench points to Bethel’s eight.

Throughout the second half, the Royals never seemed to gain a firm grasp on the game, allowing stretches where the Johnnies scored at will, with no resistance.

Saint John’s continued adding to their lead, eventually running away with a 82-49 victory.

Junior forward Granger Kingland led the team with 13 points and 6 rebounds, while Jenson added 11 points and the senior Ambriz chipped in with 10.

As this game marked the last for the careers of the senior class for the Royals, senior guard Tyler Barker appreciated the camaraderie that his teammates gave him when he came into the program three years ago.

“Once I came here, they [the seniors] embraced me and I’ve enjoyed playing with them,” Barker said. “They come to work everyday and don’t complain.”

Ambriz, also a senior, had to hold back tears when describing the impact the outgoing class had on him. The one word he was able to muster spoke to the entire four-year stretch he and his teammates had: “bonding.”

0 comments on “Bethel routed by St. John’s in MIAC semis”