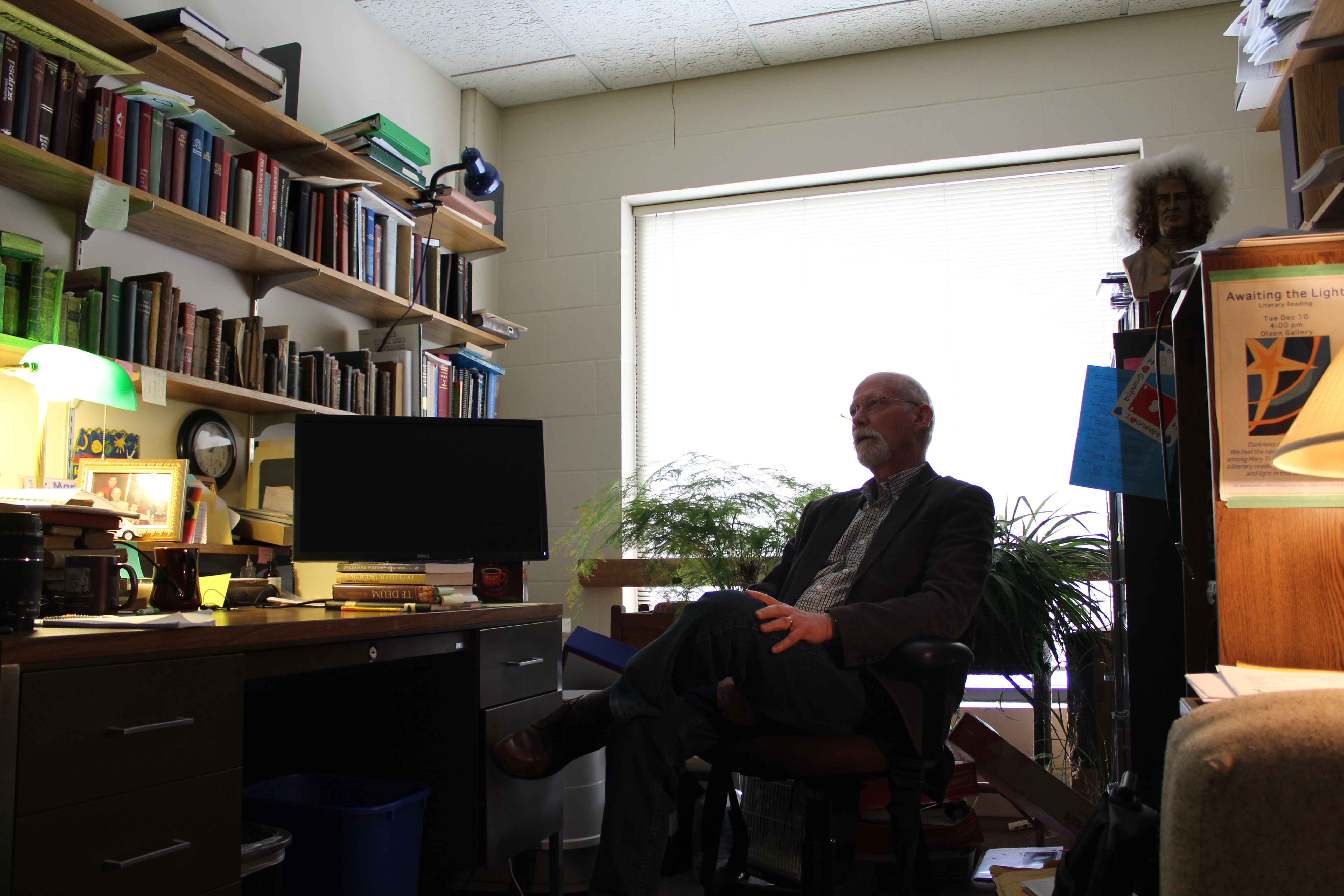 Mark Rhoads sat fence-side in his launch chair on a bright, sunny day as he waited for his daughter Allison to compete. The smell of horse sweat and manure fills the air. Dressed in boot-cut jeans, a white-frilled western shirt and an old beat-up cowboy hat, Allison sits on her chestnut colored horse, hooves stamping in place in anticipation. She takes off, and the race is over in five seconds. No matter how short the memory is, for music professor Dr. Mark Rhoads, the memory lasts a lifetime.

These are some of Rhoads’ favorite memories with his daughter Allison. Hooking up the horse trailer to his 81’, ¾ ton, forestry green Dodge pickup, driving Allison and her horse, Rags, to various horse tracks around the Twin Cities to compete, and eating at whatever fast food restaurant was nearest to the track.

Rhoads lives with his wife Maryline, his daughter Micaela and her 4 sons in Lino Lakes Minnesota, and regularly visits Allison, who works with the horses at Canterbury Park in Shakopee.

That love for his family bleeds into his care and compassion for his fellow faculty members and his students. That is the legacy he will leave at Bethel University.

Mark Rhoads has been teaching at Bethel since 1988 as a music professor. He has taught general music education, choral music, led multiple choirs, and has become a hymnologist, teaching students the ins and outs of the history and writing of hymns. Rhoads has been teaching at Bethel for 30 years, this year being his 31st and final year, and out of everything in his 31 years here, he loves spending time interacting with, encouraging, and caring for students the most.

“I could very well end up missing interacting with young people on a regular basis,” Rhoads said. “Because I think, perhaps, that this keeps me young.”

He often stops in the halls to talk with his students, ask them the extra questions, invites them into his office, and gets coffee with them at Royal Grounds just to chat. He is known for being intentional with the students, being a counselor, an adviser and a friend.

“He takes interest in his students as persons, not just students,” sophomore Joe Werden said. “When I went into his office and told him what I wanted to do [change major from music to missional ministries], he was the only one who conveyed interest in what I wanted, and what I was wanting to do.”

Being a professor isn’t just about teachings students, getting paid, and getting off work for Rhoads. He makes an effort to make a personal connection with students as well as help the students personally connect with what they’re learning.

One of Mark Rhoads’ deeper connections with a student is with Bethel University junior Keziah Wiita. Wiita has known Dr. Rhoads for all of her memorable life, and mentions her close relationship to him that they have maintained for 10 plus years,  calling him “Uncle Mark”.

“He really cares about people, especially his students,” Wiita said. “Mark Rhoads is probably one of the big reasons I came to Bethel.”

Rhoads has had his ups and downs while at Bethel. He has dealt with his duties and positions being cut, helped his family members through mental illness, dealt with insecurities of teaching, conducting and working alongside others, but has never stopped loving others, or trusting God. He mentions his faith and how dealing with various issues while at Bethel has strengthened his relationship with God.

“That’s really the only way you get to know him and trust him,” Rhoads said. “That is – through adversity.”

In terms of his legacy at Bethel, his care, encouragement and love is how he wishes to be remembered by students and faculty.

“My goal is to encourage and inspire,” Rhoads said. “That’s always at the front of my mind: to inspire and encourage engagement, not just get students to do stuff for a grade, but to actually get them to think about stuff – that’s how I would like to be remembered.”