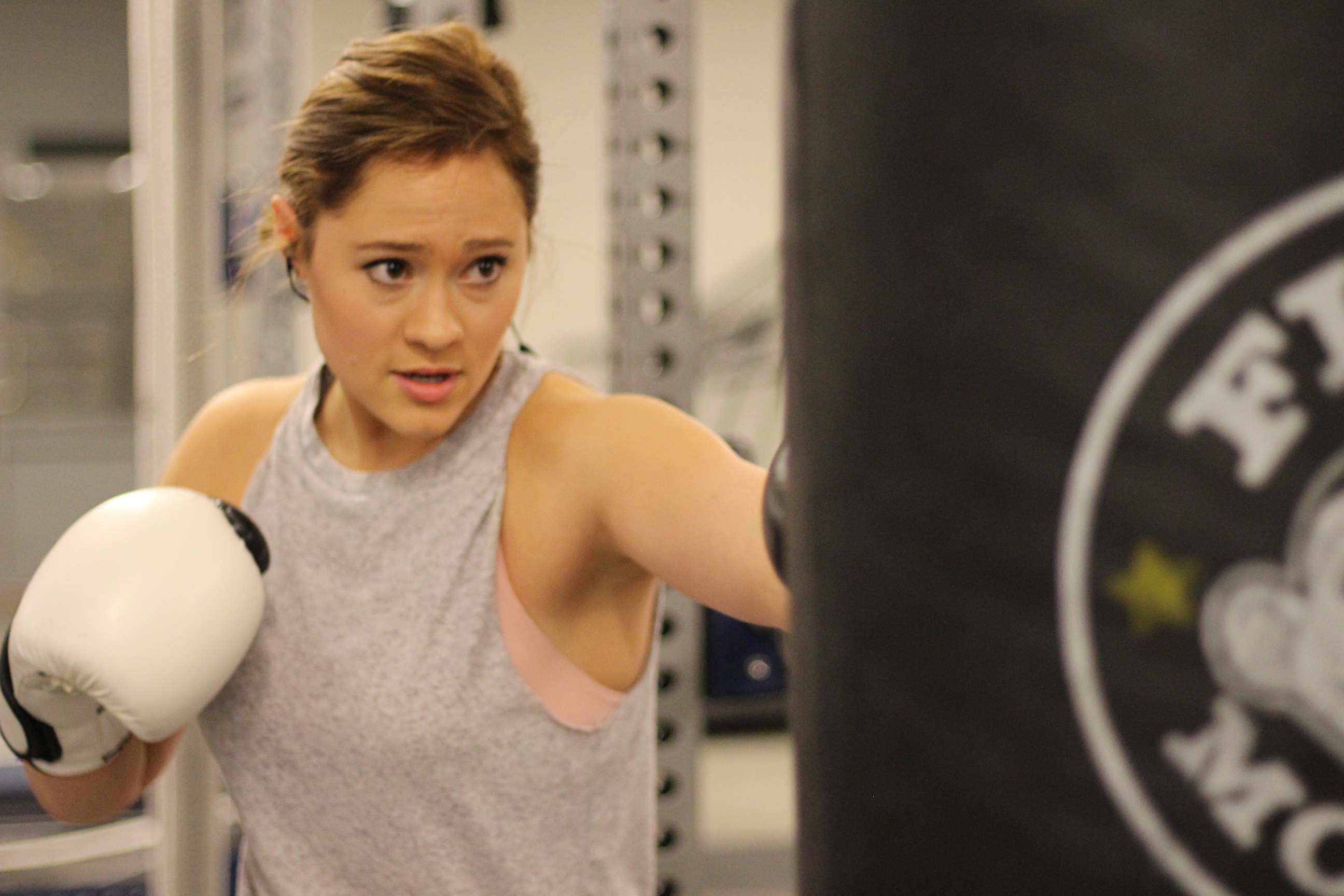 A double amputee, Elena Evans made strides longer than she ever imagined possible.

Elena Evans loved summer camp. Suspended by paracord at the top of a rock wall, she surveyed Trout Lake. The water and the trees and the toddlers stared up at her like she was royalty. Releasing her grip, she descended through woodland air, the smell of pine and campfire smoke welcoming her back. The rope went slack as she landed on feet that weren’t hers.

Novocherkassk, Russia — In 1996, there was no cure for physical deformation. No medicine, no therapy, no special care. Most kids learned how to walk. Evans did too, just on her knees.

Evans was born with feet that curved in. Not the standard angle, but a sharp diversion toward the opposite calf. She did a sort of shuffle across the orphanage floor, her feet lagging behind. It was there that she found her place. She was cared for and taught how to care for herself. How to brush her hair and her teeth, how to be a kid. It was a place to stay, to keep warm, to play with the hand she had been dealt. But it was just a place.

Bed number two was her home. A thin mattress set upon a rusted metal frame was where she found rest. The air smelled of urine, but she thought nothing of it. It was the only scent she knew. Through a side door was the bathroom. It held more metal and more rust. Children bathed in water tinted with orange. Kitchen pots were toilets.

It wasn’t until she felt the embrace of a couple from Minnesota that she found a home.

The day her parents arrived, she greeted them like a bride walking down the aisle. She shuffled past the bathtub and the pot toilets and bed number two before turning toward two strangers. A tattered white dress with black stripes draped over her shoulders and covered her legs to the knee, stopping just short of her shins and feet, which curled under her. Her sandy blonde hair was combed to the side, leaving room for her wandering brown eyes.

The orphanage was left behind part by part as she inched closer to the couple. Her gait sped up as they locked eyes for the first time.

“We couldn’t believe she was our daughter,” Evans’ mother, Betsy Evans said.

Evans traveled from Russia to Minnetonka, Minnesota and began her childhood. That journey would ultimately lead to her enrollment at Bethel University, a place where she would grow in both strength and spirit. But first, she had to be a kid.

She was greeted by a “Welcome Home, Elena” sign hung across the garage door. Inside was her very own bedroom with pink walls, a big-girl bed, soft carpet, a quilt from grandma and a fuzzy rug that she took naps on.

She was also greeted by two faces beaming with smiles. Two strangers, Tommy and Peter, had become family. She had brand new brothers.

Legos were snapped together on the living room floor. Racecars and airplanes and motorbikes began to cover the carpet. A dollhouse sat in the corner awaiting Evans’ departure from the boys. She had traded an orphanage for a playroom. Metal pots for colored blocks.

One week after her arrival, she was given a knee-high hockey stick. She carried it around like a security blanket and dashed across cement on her knees worn like heels. Scoring goals with a rubber ball through the gap in her bedroom nightstand, she would yell Goal! and Go Gophas! in a Russian accent.

There was no more waiting for rescue. Her lifeboats had arrived, and they were crawling and shouting and laughing with her.

Three months later, she lost her feet. Her parents knew that it was the only way she could have a normal life. The only way she could walk and jump and skate. Before any steps could be taken, she had to agree. She was only three and her English was just developing. A translator asked if she wanted to undergo the procedure. She replied immediately. In English.

She got them. Like a gift on Christmas morning, she was presented with shiny plastic. Not a toy, but a life. The peach tone of the prosthetics faded to a metallic red at the ankle and revealed the feet. They were perfect. Five toes each and pointed forward. An image so familiar to most, but alien to Evans.

She walked a slow race against her own ability down a lane lined with support bars at Shriners Healthcare for Children in Minneapolis, Minnesota. A doctor supported her by the shoulders while her parents and brothers watched from the sidelines. They cheered like she had won Olympic gold.

Her new legs became part of her. Although she could remove them, they changed what she could do. Who she was.

Shortly after her amputation, her father Lonny took all three kids to the Minnesota Twins season opener at the Metrodome. The stadium buzzed with cheers and boos. The smell of popcorn wafted through rows of fans. Lonny watched the game as much as he could. He did have three young children. When the group took to the stairs, it was Elena who led. She was walking. Step by step. Plastic on concrete. All by herself.

In the summers, her father would mow a baseball diamond into the yard. He lobbed balls across home plate toward the metal bats of Tommy and Peter and now Elena.

She would hobble to the plate and grasp the bat like an MLB all-star. Her dad would set up the tee and she would swing. And then she would run. And run and run and run. Because she could.

“I was definitely a girl who would throw basketball shorts or go get her hands dirty in the mud,” Evans said.

When she lost her feet, she found sports. Sprinting and skating and scoring alongside everyone else.

After family, hockey became her second love. Her father developed her skating form and puck-handling from age 5. And she didn’t want to just play. She wanted to compete.

The boys’ league was more competitive, so that’s the one she joined. Within it was muscle, testosterone, and Elena, whose head was too small for any helmet. She stuffed hers with socks and took to the ice.

“She was always the best,” Evans’ brother, Tommy Evans said. “Better than the boys.”

As her legs became stronger, her bond with sports did the same. She traded the backyard ice rink for an indoor arena, the driveway hoop with plastic wheels for a glass backboard above waxed hardwood. She was just one of the kids. Not defined by her difference, but inspired by it.

“I wasn’t out there to prove I could do this because I’m on prosthetics,” Evans said. “But just that I can do this. I love to do this.”

When she wasn’t skating, she was on the couch with dad watching the Minnesota Wild. She idolized players like Darby Hendrickson, who gave her a signed jersey, and Sergei Zholtok, who gave her his time.

At a signing at the Mall of America, Zholtok sat facing a line of hundreds. Fans of all ages. He whipped his marker over posters and hockey sticks like he had somewhere to be. But when a tiny girl with prosthetic legs approached, time stopped. He recalled learning of her story on a radio show months earlier. He spoke in Russian, his native language, and she spoke back. The fans would have to wait.

In Springfield, Massachusetts, Evans got to play like Zholtok. And she found more than just the net. At an American Amputee Hockey Association game, Elena met Andrew. He was from Providence, Rhode Island, played hockey, and had two prosthetic legs. Just like her. He was the first person that was just like her. They asked each other questions as any two friends would. But they weren’t about school or clothes or video games.

Do you sleep with your legs on?

Dad, when I get to Heaven, will my legs be perfect?

Honey, your legs are perfect now.

Evans couldn’t glide through the halls quite like the pretty girls. She couldn’t wear flip flops in the summer or feel her toes go numb in the winter. There would always be those little things. Those can’ts.

As a toddler, she would huddle under her bed covers, hands clasped together like vice grips, and pray. Pray for new legs. For tomorrow to be a new day. A day without barriers. Without those fake plastic and metal extensions. She fell asleep mumbling to God.

On a family vacation to Tampa, Florida, 5-year-old Evans made sand castles by the sea. She stood up and felt the ocean breeze on her face, but not the sand between her toes. A stranger ran to her side. A young boy her same age.

You can’t run in those legs!

She could. She ran across softball fields and college campuses and weight-room floors. Not just running, but jumping, bending and lifting.

Inside the Wellness Center at Bethel University, Evans proved her strength. It showed through everything but her legs. Plastic is rigid.

She climbed endless stairs on the Stairmaster that overlooks Bethel’s main courtyard. When she reached the top, she stepped off the machine and wiped it down. She continued with the rag and cleaning formula to the treadmill, weight sets, and front desk. The center shined.

When she isn’t working the Stairmaster or prepping the bikes for early reps, she is sitting behind the tan wooden desk that faces the glass front door. A smile constantly adorns her face and transfers to every lineman, jogger, and physics major that enters the space.

“I love her heart,” Evan’s boss, Rick Meyer said. “I gain strength by watching her.”

In the summer of 2018, Evans stood atop a rock wall. Wind ruffled the hair protruding from her climbing helmet while the chatter of children reached her ears from below. She gazed over the horizon and could almost see her birthplace.

At Camp Maximum in Zolotonosha, Ukraine, she helped kids like her. Kids who were different. She gave them love and guidance and fun through zip-lining and rock climbing, the same camp activities she once loved.

She told her story to a crowd of campers. They stared at her. Not at her legs but into her eyes.

“You are not defective,” Evans told them.

She loved summer camp. It was a reminder of who she was and what she could do. She would never let her circumstances become her identity. She was not a girl with prosthetic legs. She was not a girl adopted from a urine-scented orphanage. She was Elena Evans. That’s all she needed to be.

“You need to be who you were meant to be,” Evans said. “Nobody should be able to define your disabilities.”

3 comments on “On my own two feet”