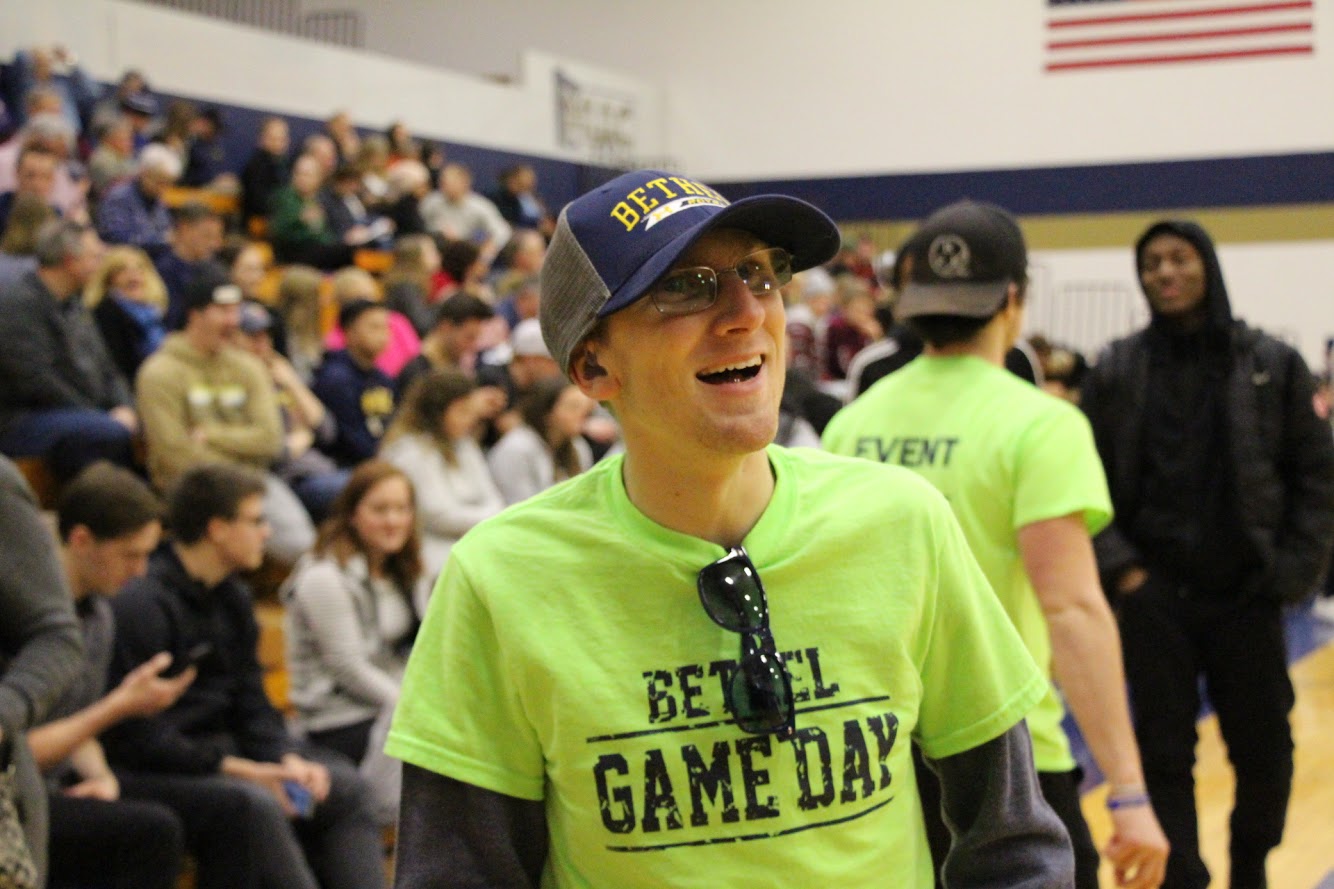 Freshman Justin Evilsizer is not an average sports fan, rather he lives his life bringing joy and positivity to everyone he meets.

Justin Evilsizer sits at a ticket table in front of the Robertson Center, using his blue stamper to send a smiley face onto fans’ wrists.

The Bethel’s men’s basketball team prepared to go against St. Thomas and Evilsizer greeted everyone, Royal or Tommie, with fist-bumps, high-fives, or a nod and a smile. Instead of spectators gazing at a Raisin’ Canes gift basket on top of the table as they entered the gym, filled with a baby blue t-shirt, a plush dog with a ‘Canes’ bandana, and layers of red confetti, they glanced first to someone else.

His bright neon green shirt helped catch their attention. It might still be seen even if the building lost power.

To improve his hearing, Evilsizer received a Cochlear implant placed near his ear, which his mother said has significantly helped.

Even with his condition, his mother says that sports has played a big part in him overcoming obstacles, such as the difficulty to continue a conversation, maintain his overall balance, and pick up on social cues.

“He uses it [sports] as a way to find something in common with peers,” she said. “Sports have been a way for him to interact with people socially.”

Back at the ticket table, still clicking away, all he could think about was halftime.

But Evilsizer couldn’t wait. Players were warming up pregame and he thought it was his time to sweep. He rose to his feet and strutted in to the gym, looking for his sweeper.

Evilsizer, a game management intern working for Bethel’s athletics, dropped his head and trudged back to the table from inside the gym when told to be patient and wait. But as he continued being Bethel’s gatekeeper and clicking stamps, a smile trickled onto Evilsizer’s face.

Bethel’s starting quarterback, Jaran Roste, is a member of the Bethel gameday crew and he came to greet his co-worker, who needed some encouragement. “What up my man,” Roste said to Evilsizer. “You’re the man! Don’t forget it.”

Not that he needed reminding.

Evilsizer, a freshman in the BUILD program, grew up in Plymouth where he attended Wayzata High School. After graduating in 2016, he found himself cleaning tables and serving food at Culver’s off Highway 55 near the high school. It didn’t hurt that he was closer to his favorite treat: a concrete mixer with chocolate custard and mint Oreos. But even the sweet treat took second place to his favorite part of the job: chatting with customers.

When choosing to come to Bethel University, Evilsizer found himself drawn to the possibility of socializing with many people on a daily basis.

Alexa Nelson met Evilsizer at the beginning of the year. Whenever she walked by him, she saw him in the hallways socializing with whoever he came in contact with. She got to experience that first-hand when she took a mentorship position, eventually ending up as his student mentor for a life science course in the second half of fall term.

From that opportunity, Nelson now sees Evilsizer as someone who can change an environment with his positivity.

“He loves to talk to everyone,” she said. “He’s always very encouraging. It brings a lot of joy to the whole school.”

Evilsizer resides in Nelson Hall, where he hangs with friends — “a lot of friends” as he would put it, as well watching a daily 10 a.m. viewing of “The Price is Right” — he’s really looking forward to seeing Plinko.

He also chose Bethel for sports.

One day, Evilsizer wanted to become more involved with the football team, so, not knowing where to go, he walked down the hallway where the coaches’ offices are in the second floor of the Robertson Center, hoping to find a coach.

That coach happened to be defensive line coach A.J. Parnell. One invitation to come in his office and chat turned into a relationship where Evilsizer now can walk right in without notice and feel at home.

His presence in meetings and practices allowed Evilsizer to experience his favorite sports moment, which doesn’t require a long trip down memory lane. November 10, 2018. Bethel hosted St. Thomas, in a game that essentially was a playoff game.

Evilsizer got the opportunity for that one game to be on the sidelines with the football team, cheering them on and providing support.

“He became part of the D-line group,” Parnell said. “Justin really cared about those guys. He had a great presence in our room.”

Parnell said he doesn’t know how Evilsizer got into the defensive line’s room, since Evilsizer’s high school friend, Jake Marsh, is a the backup quarterback.

Marsh remembers meeting Evilsizer for the first time the August before junior year at a football camp.

Like Nelson, Marsh had only heard of Evilsizer before encountering him, but from that point, a special relationship started between the two. It showed when, at the end of the last game of Marsh’s senior year of football, Wayzata lost on a 42-yard game-winning field goal that left Marsh close to tears. After the kick went through, Evilsizer approached Marsh, who is also a pitcher, gave him one of his patented side-hugs, and said, “Well, now it’s time for baseball.”

And now, both together again at Bethel, Marsh sees the same qualities in Evilsizer today that he did back at the football camp.

“You can always count on him being a light in the room,” Marsh said. “He takes joy in everything.”

Bethel and St. Thomas run off the benches and down to their locker rooms. Even though there’s not a single player left in the gym, it’s go-time.

He lines up at the baseline, as if to run a set of killers. He waits there, holding his sweeper like it was his championship trophy. The magic words are said by co-worker Tavian Swanson : “let’s go.”

0 comments on “A smile that matters”