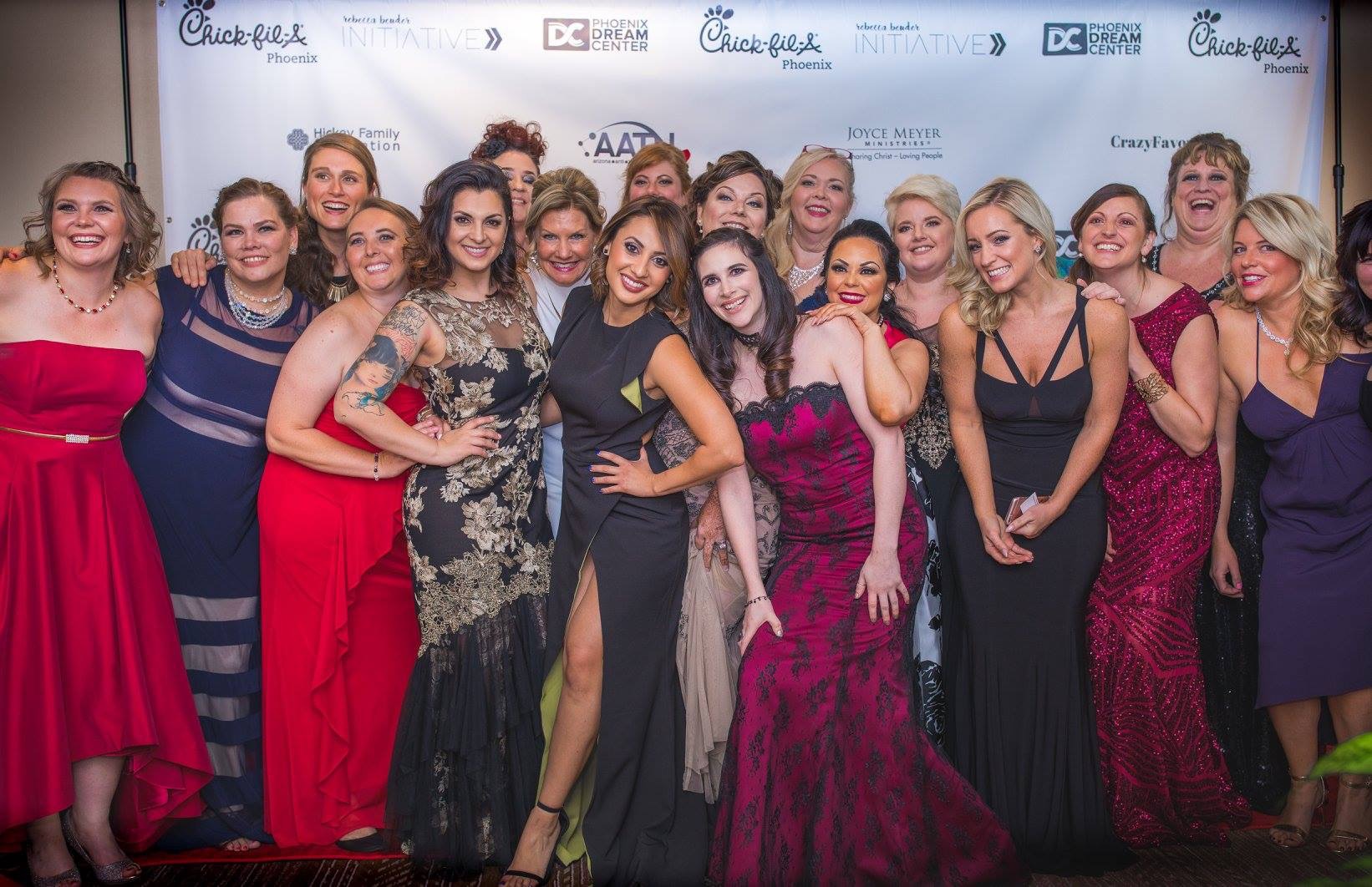 Speaker and founder of Rebecca Bender Initiative, Bender offers support to other survivors through recovery in her program.

Rebecca Bender woke up and rose out of bed as the sun slowly reached its way across the horizon. Her daughters slept peacefully in the other room as she sipped her coffee and began her daily devotions. An all too familiar vile feeling began to creep up inside of her as the sun’s rays washed over her. In another life, sunrise had signaled that it was time to go “home” to a master manipulator and controller after a long night of working. It was time to go home to her trafficker.

“I felt like the Lord said, ‘How can you sit here in your warm house with your nice cup of coffee when you know what it’s like to be more afraid to go home than you are to get in the car with a stranger?’” Bender said.

Bender was an 18-year-old mom living in Eugene, Oregon when she met a charming man who took her to live in Las Vegas six months later, promising a life for her and her daughter. After six years of trafficking and several prostitution arrests, she escaped in 2007. Now, she is a worldwide leader in the anti-trafficking movement finishing up her MA in Christian Thought online at Bethel Seminary. In 2014 Bender founded Rebecca Bender Initiative (RBI) which offers Elevate, an online school that has helped more than 500 other survivors heal and flourish from traumas similar to hers.

Angie Conn is one of those survivors.

Conn seemed to live a normal life on the outside. Born to parents who will be married 48 years this December, she grew up in a middle-class family in West Virginia where she once loved catching lightning bugs and dreamed of being a zoologist. On the inside, though, she was harboring a shameful secret that haunted her.

Here’s how she remembers her story:

The bullying started in seventh grade. A group of boys she had grown up with began to sexually harass her on the school bus. They would wait for her to arrive in the back rows and see what they could get away with, touching her in ways that propelled confusion in her 13-year-old mind. Nobody noticed.

“I knew it was wrong and I didn’t like how it made me feel, but I didn’t feel like I could tell anybody,” Conn said. “I grew up in this household where a woman’s sexuality was shamed.”

Freshman year of high school, Conn developed a friendship with an older girl who invited her to spend the night. They were going to sneak out and go to a party, the girl had told her. She said it would be fun.

Conn couldn’t have known that it would be at this party where she would be sexually assaulted for the first time. She couldn’t have known that night would begin a process that turned an honor roll student who followed the rules into a hardened girl who frequently ran away from home, skipped school, drank, smoked pot and shoplifted. She began to date older guys. She self-harmed and self-destructed, wondering if anyone noticed. She once went to a teacher she thought she trusted, reaching her arm out to make the scars on her wrists visible. The teacher looked at them and quickly looked away. Conn got the answer she needed.

At 15, she had been dating a 19-year-old for four months when, at a party, he sold her to strangers in exchange for drugs. Conn pressed charges that night. The police told her that she should have stayed at home where she belonged. If she had, they said, surely this wouldn’t have happened to her.

“That just confirmed in me that nobody cares,” Conn said.

Conn decided to run away. Not thirty minutes away this time, but instead across the country to California, where she could start all over at 16. She and a friend got picked up by various truckers from Kentucky to Denver and eventually made their way to Long Beach, California. A man in his 20s offered a two-bedroom apartment. He didn’t seem threatening and Conn needed a roof over her head and food to eat, so she accepted. He turned out to be one of the biggest crystal meth dealers in Long Beach.

“We had this idea that we were going to hang out on the beach and work in an ice cream parlor,” she said.

Instead, the man approached them one day and laid down the rules. She would be working for him, not a tourist shop on the boardwalk. Conn spent 11 years controlled by various traffickers who would manipulate her and abuse her, including hooking her on crack cocaine. When that stopped working, they used black tar heroin. She wasn’t allowed to use it herself; she had to get it from her trafficker so she wouldn’t go too far. She began to not care if they hurt her anymore. When they started to threaten her 13-year-old brother, whose location she had trusted them with earlier, she knew she had to do whatever they said.

One day, Conn decided she would rather die than continue living this way.

“I just started walking and kept walking, and I for sure thought that somebody was going to come gun me down and I was gonna die in the streets,” she said. “I kind of made a morbid peace with it.”

She didn’t. Dec. 1, 1999, Conn escaped trafficking for good. She began a lifelong process of healing as she enrolled in RBI’s 16-week online academy called Elevate the summer of 2016, where she would video chat five other survivors weekly. She is now an Elevate speaker and mentor on RBI’s team and in November talked to 1,000 kids at the National High School Leadership Conference in Washington D.C. about the vulnerabilities of domestic human trafficking.

Last February, Bender was one of the only non-law enforcement professionals given an all-access special operations pass at the Super Bowl in Minneapolis. Bender went on location to where Minneapolis and St. Paul law enforcement held undercover sting operations. The police responded to real ads on Craigslist or Backpage, and when girls showed up, Bender was available to offer assistance and support to the victims.

The Minneapolis Police Department is unique, Bender says, because it has a policy to not arrest victims.

“I think their offer to provide services instead of incarceration is one of the leading groups in the nation,” Bender said. “We end up criminalizing the victim, which adds a lot of barriers for reentry into society.”

Bender remembers wanting to volunteer at her daughter’s school. She couldn’t pass a simple background check because she had a history of sex crimes on her record.

Bender believes that the root of this issue is the sexualization of America’s culture.

Bender is often asked to serve as a victim advocate for trafficking cases and will consult with attorneys, offering insight to prosecutors who don’t know the lingo or brainwashing that occurs within trafficking. A case RBI recently worked on in October resulted in a trafficker who was sentenced to 42 years to life for trafficking girls as young as 14 in Fresno, California. One of them refused to identify her 35-year-old “boyfriend” in court or to the police because she claimed to love him. The manipulation that occurs in these situations is widely misconceived by the public, Bender argued.

“Nobody wakes up one day and thinks, ‘I’m gonna go buy a kid for sex,’ much like no victim wakes up and says, ‘Someday, I want to be a prostitute,’” Bender said.

Many women who are sex trafficked, such as Conn, have come from backgrounds of sexual abuse and/or foster care. The National Center for Missing and Exploited Children reported that 70 to 90 percent of commercially exploited youth were sexually abused as children. Traffickers are not always going into local high schools and picking out the honor roll student and the varsity athlete, Bender argued. They are looking for the people who have a vulnerability they can target.

“The thread that all trafficking has is vulnerability,” Conn said. “We all have them, so no one is immune.”

Social media recruitment is expanding, as well. Conn talked to 500 7-12th graders at Point Pleasant Junior/Senior High School in West Virginia  and more than 90 percent said they have engaged in conversations with strangers over social media because they have “mutual friends.”

“With social media, cyber trafficking is huge, and so we might not even know that it’s happening,” Szilagyi said. “It’s happening all around you whether or not you know it.”

Today, both Bender and Conn use their platform to reach as many victims as possible. RBI has reached more than 4 million media views since 2014. They have rescued 48 women, 90 percent of which also had at least one child. Through their program, Equip, they have trained and raised awareness with more than 90 thousand professionals and community members.

When Bender ran from her trafficker, she cried on the plane ride home to Oregon, thinking that she was going to work a poverty wage job the rest of her life.

“To sit here and just be able to run a company with a phenomenal team, all of us doing what we love… I’m just honored to be on the team,” she said.

Bender hopes that her Christian Thought degree from Bethel will allow her to write Bible studies for all women who are emerging from an array of traumatic experiences, not just trafficking.

“When I was wanting to finalize my education, I prayed about which direction to go, and seminary was what came to mind,” Bender said. “I appreciated how Bethel wanted diverse backgrounds and experiences in their program, so I applied and I prayed.”

Bender has trained medical professionals, the FBI and Homeland Security, former President Jimmy Carter and local communities across America. Doctors have approached her after conferences in tears, saying they can remember patients that had fit every descriptor she had given of trafficking. She knows that the next time that doctor sees those signs, they will call a local detective or the local human trafficking organization. What they won’t do, she said, is send them back to their trafficker with a prescription for antibiotics, which Bender sees frequently.

“I love seeing the light bulb go off in people,” Bender said. “I love hearing those ‘aha’ moments, when they start to realize that trafficking isn’t always kidnapped children smuggled across borders.”