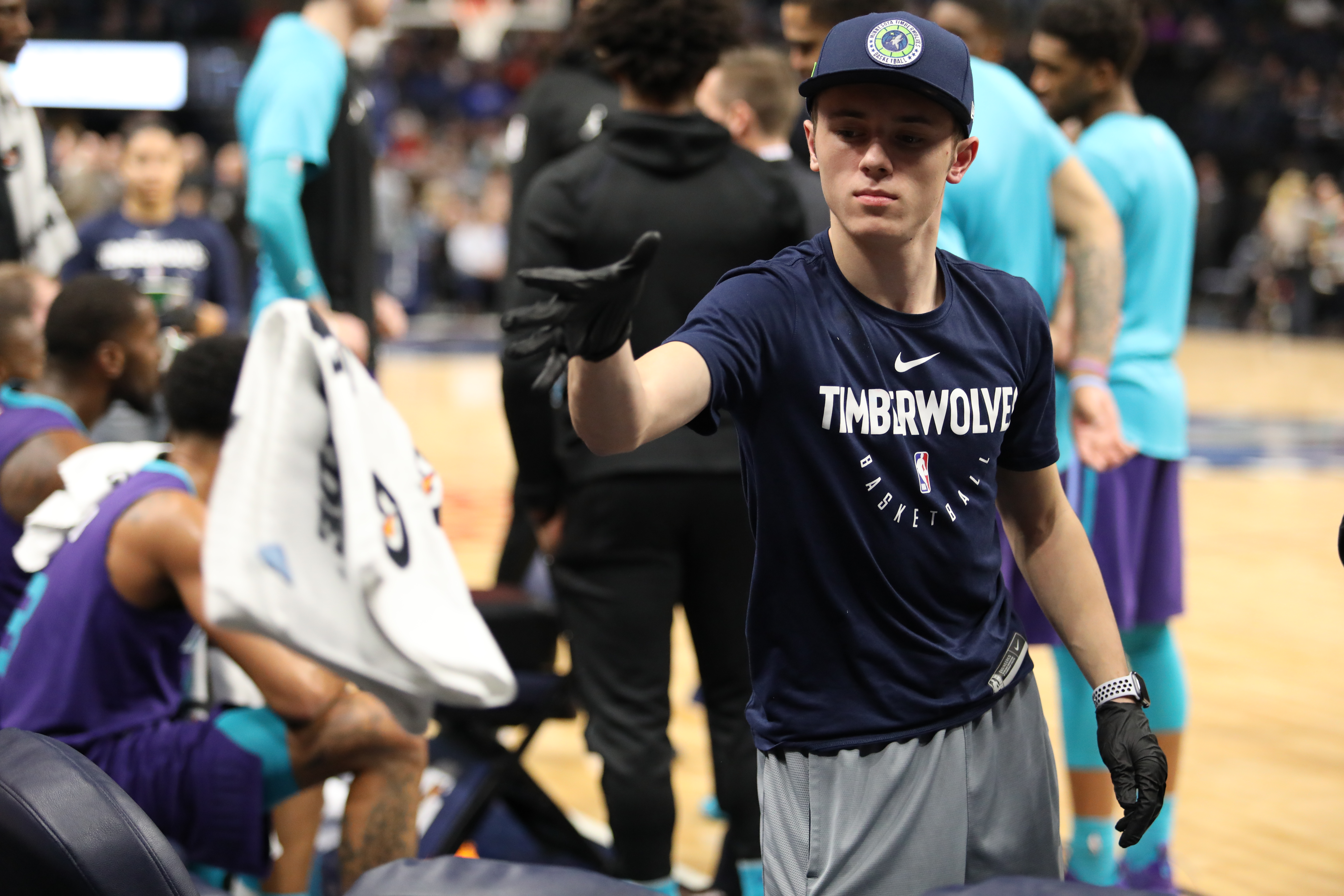 Tyson Hohenecker gets a courtside view to NBA games as a team assistant for the Minnesota Timberwolves.

Free shoes. Signed memorabilia. Courtside view. And all Bethel University freshman Tyson Hohenecker has to do is give star NBA players water in paper Gatorade cups.

Hohenecker’s dad worked first for the Timberwolves as a radio producer and then as a travel and facilities manager reporting to former Timberwolves coach Flip Saunders.

“My dad was the glue that held a lot of the organization together because he knew how to coordinate with people,” Hohenecker said.

Hohenecker’s dad currently works for Kevin Garnett. The two became friends while Garnett played for Minnesota. Bill Hohenecker said Garnett became a mentor figure for Tyson. Garnett was the first person in the Wolves’ locker room to hold Tyson as a baby. Even now that Garnett retired from playing in the NBA, he still keeps in touch with Tyson. Last summer, Tyson and his dad visited Garnett in California, where Garnett met Tyson for breakfast.

While working for the Wolves, Hohenecker’s dad also became friends with Flip Saunders.

“My dad and Flip were so close,” Hohenecker said.

Hohenecker and his family went to Saunders’ cabin every Fourth of July. Saunders asked if Hohenecker wanted to work as a team assistant for the Timberwolves.

“I was at the hospital when he (Saunders) died,” Hohenecker said.

“That’s the only time I’ve broken down in that arena, but it was hard to watch that.” Hohenecker said. “I always think of him before games.”

During a typical shift for the Timberwolves, Hohenecker arrives at Target Center at 4 p.m. and sets up water carts for about 20 minutes. He places the court mops and towels by the benches, and then rebounds for either the Timberwolves or their opposing team for two hours.

“We always do some one-on-ones,” said Hohenecker about rebounding for Jones.

After rebounding, he typically works filling waters for the away team during the game, but might mop the court or work a bench handing out towels or warm up gear if another assistant is gone.

Hohenecker reads players during the game to know when they need something.

“If they’re kind of mad about how the game is going and how they’re playing and why they’re out – not the best time to go up and tap them on the shoulder with their water bottle,” Hohenecker said.

In one game against the Houston Rockets, James Harden wanted to use Hohenecker as a stretching crutch. Harden’s height is about 6 feet 5 inches, while Hohenecker is about 5 feet 6 inches tall.

“He raised himself up on my shoulder… and just kind of wanted to use me for balance,” Hohenecker said.

“There’s no star player that I’ve had that’s been rude to me… It’s more of like the 13th through 15th player on the team – they’re benchwarmers, but yet they think that they’re allstars,” Hohenecker said.

One Memphis Grizzlies player wanted two hot packs every time he came out. During one situation, Hohenecker only gave the player one hot pack.

“It was the worst experience I’ve ever had at the Wolves. He took the hotpack, chucked it up in the air and threw it down on the ground really hard,” Hohenecker said.

When the player gave Hohenecker a hard time for the mistake, he said he told the player to calm down and apologised.

Another time Hohenecker misunderstood a team’s assistant coach who had a Russian accent. It sounded like he was asking Hohenecker for sugar. Hohenecker asked him two times to clarify, but heard the same reply.

“I tell one of my coworkers, Jason, ‘please go back and get some sugar… this player development guy wants it,’” Hohenecker said.

Hohenecker gave the coach some sugar, and he replied asking what it was.

He was asking for shoe grip, but the Wolves’ staff knows it as court grip.

“It’s in the cart, it’s like an inch from him. So I get it, and I was so embarrassed,” Hohenecker said.

When the games are over, Hohenecker gathers towels and is done in about 10 minutes. However, the team assistants rotate doing a late night shift cleaning up the referees’ locker room and loading the away team’s equipment onto a truck.

If the Timberwolves get crushed by their opponent, Hohenecker mentioned the games dragging on for the staff.

“In all those games I’ve never been over on the Wolves’ side,”

I’ve been over to the visitors side, and I’ve even heard them (the players) complain like, ‘ref stop making these calls so we can just get out of here we’re already winning by 20,’” Hohenecker said.

Some players on the Timberwolves don’t care about big losses. Other players get angry because they work hard, but not everybody on the team works as hard as them. Still others get angry, but don’t want to do anything about it.

“All three of those are on the Wolves, which I think is why we struggle as we do,” Hohenecker said.

Despite working close to the the Timberwolves, Hohenecker gets some insight on the NBA from his dad, but he also checks ESPN like other sports fans. He doesn’t follow the NBA on social media, but watches games on TNT when he can since he likes the halftime commentators including Shaquille O’neal and Charles Barkley.

“I don’t actually watch basketball games until the playoffs because I feel as if I’m always watching them,” Hohenecker said.

Hohenecker said he enjoys being a part of something he will remember for a while, but he doesn’t need to follow the NBA constantly. However, he has some souvenirs to help him cherish the memories he makes.

“Jimmy Butler, last year, he gave us three pairs of Jordans. This year before he left he gave us two pairs,” Hohenecker said.

One player gave Hohenecker a $200 Visa gift card. He has also received signed shoes and a ball from Karl Anthony Towns and more signed shoes from Andrew Wiggins.

Next time the Wolves play at home, watch for Hohenecker on TV wearing a navy blue Nike Timberwolves shirt filling up Gatorade cups or mopping the floor when a sweaty player slips and sitting next to the visiting team’s bench at Target Center.

0 comments on “Freshman works for the Wolves”