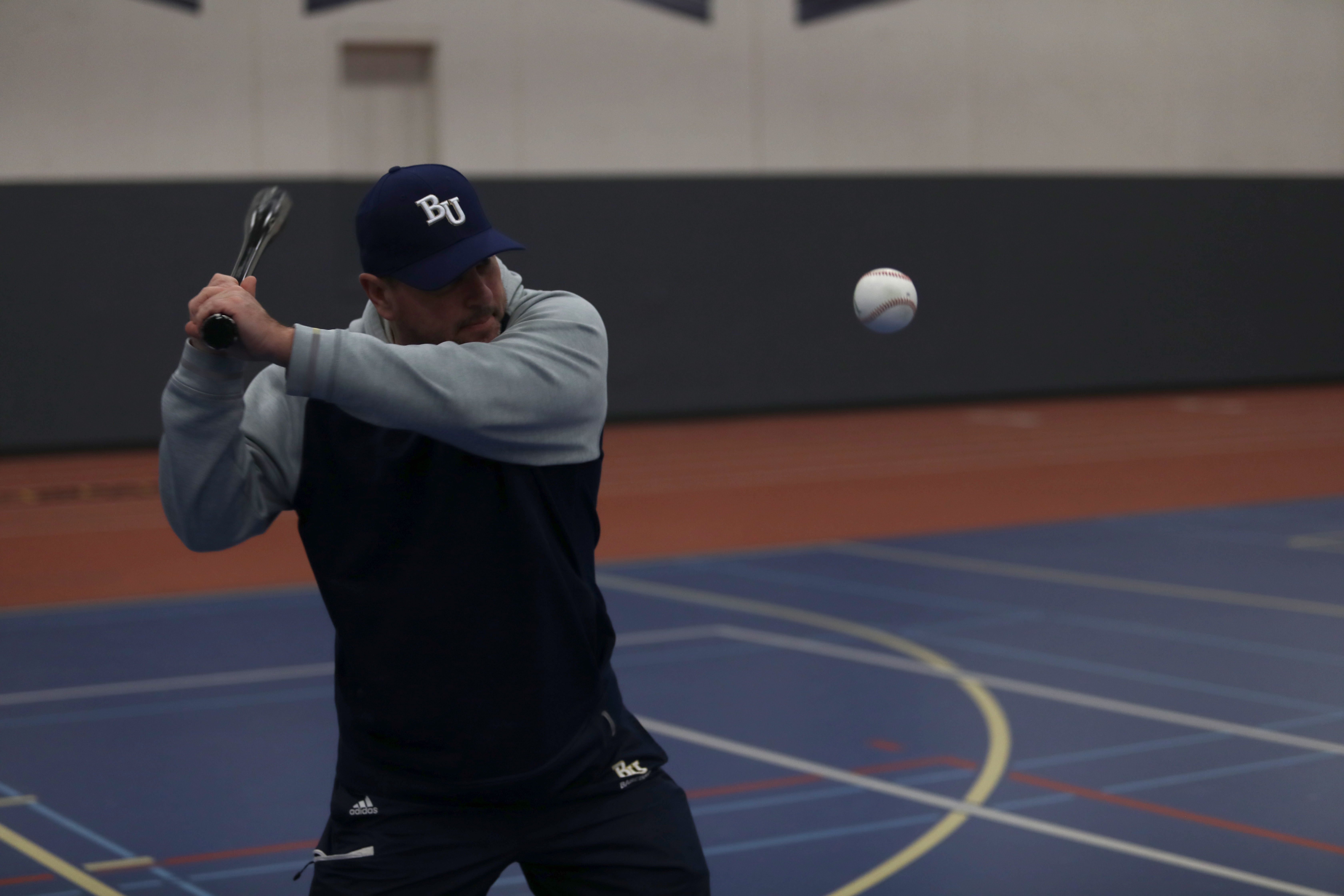 A lifetime of playing baseball supplied Brian Raabe with the wisdom he needed to become a coach.

Five-year-old Brian Raabe knew what his life was going to be.

It was the same process as the rest of the kids in New Ulm, Minn., a small German town 98 miles southwest of the heart of the Twin Cities. When your hometown has as many professionally-kept baseball fields as city council members, you’re more likely to end up on a diamond than in an oval.

Only the large metro-style cities of Minneapolis, St. Paul and St. Cloud can lay claim to owning as many big leaguers as New Ulm when it comes to Minnesota natives. Longtime catcher Terry Steinbach headlines the six ballplayers who have been recorded as major league participants.

Brian Raabe is one of them, the young batboy who carried Steinbach’s catcher’s gear growing up. Raabe, the 5’9” second baseman who joined the University of Minnesota squad as the last recruit of the 1986 Gopher class, became an All-American and All-Big Ten player, was chosen in the 41st round in the 1990 MLB Draft by his hometown Minnesota Twins and experienced exactly 29 trips to home plate in the big leagues.

None was more memorable than the first, in Oakland Coliseum in 1995. Raabe strolled up to the plate to face the imposing figure of former first-round pick Todd Van Poppel, who stood on the mound for the Athletics.

Masked and padded behind the batter’s box waiting to receive Van Poppel’s delivery was Terry Steinbach.

“Walking up there, a lot of things are on your mind,” Raabe remembered. “It’s the satisfaction that dreams do come true and hard work does pay off.”

He popped out to Mark McGwire at third base.

The phrase didn’t become Bethel University’s baseball team motto by accident. When Brian Raabe took the head coaching job in 2012, he brought with him a pocket full of sunflower seeds, bubble gum and a grit rooted in his rural Minnesotan work ethic.

“For the last seven years, Coach Raabe has led the baseball program with tenacity and the will to win the right way,” Bethel athletic director Bob Bjorklund said. “It has resulted in an atmosphere of both competitive excellence and life lessons in spiritual maturity.”

Raabe also brought acknowledgment of failure both on the field and off.

“There’s no sport that mimics life more than baseball,” Raabe explained. “You can do everything right, do everything perfectly, and still fail.”

Everything did go right in the minor leagues. A couple of callups to the Twins didn’t last long in 1995, but the reason he was even considered worth paging for the big club was his undeniable dominance of the farm system. It didn’t matter if he was in Visalia, Fort Myers, Salt Lake City, Nashville, Tacoma or Columbus—opposing teams made conscious efforts to force Raabe back to the dugout without touching a base safely. He won the Triple-A league batting title in 1996, hitting .351 in 116 games. In 1997, he had a .352 batting average. In 4,387 minor league plate appearances, he struck out 153 times. (For context, former Twins favorite Brian Dozier has had 4,407 plate appearances in his career and has struck out 863 times.)

He saw action in just four more major league games over the next two seasons.

Leading the entire NCAA in earned run average—regardless of division—as a pitching staff is one of the most impressive pieces of Bethel baseball’s resume. Especially when the head coach is a hitting expert.

But in the end, does the skill influence the game more than the mentality? Maybe not. College athletes are receiving the same messages as the grade school ballplayers that Raabe works with as a hitting instructor for the Minnesota Twins youth academy.

“Everybody’s so worried about failure now. In baseball, that’s all you deal with—constant failure,” Raabe said. “That’s something I try to teach the kids.”

The message is plain: next move. Keep going. Don’t stop.  A popout to Mark McGwire didn’t withhold Raabe from winning a batting title the next year. Two games each with Colorado and Seattle in 1997 couldn’t stop him from giving the Japanese league a shot in 1998.

Finding a way extended further than making a mark in Major League Baseball. After the 1999 season with the New York Yankees AAA affiliate—where he hit .327 and recorded twice as many doubles as strikeouts—life was catching up. He was on the north side of 30 years old, his daughter Brianna was no longer an infant and his son Zach had just been born.

Even after the Yankees offered him another contract to continue playing, Raabe was ready to take another route of learning. “I wanted to be a dad,” he said. “I had plenty of opportunities to come back to the game, but I wanted to leave on my own terms.”

He struck out in his final professional at-bat.

How many trips to the plate in a major league stadium does a hitter have to make in order to be considered an elite instructor and coach?

If there was a mold, Brian Raabe broke it. Going 6-29 in the bigs is equivalent to hitting a slump on the most recent week-long road trip. Getting to 29 career at-bats took Raabe 10 years.

Yet here he is, head baseball coach at Bethel University, using his own playing career as Exhibit A in the “How To Handle The Obstacles Life Throws At You” course.

He says baseball owes him nothing. But ever since that five-year-old batboy touched the fields of New Ulm, Brian Raabe knew what he wanted to be. He found a way. And he owed baseball everything.

0 comments on “The hometown hitter”