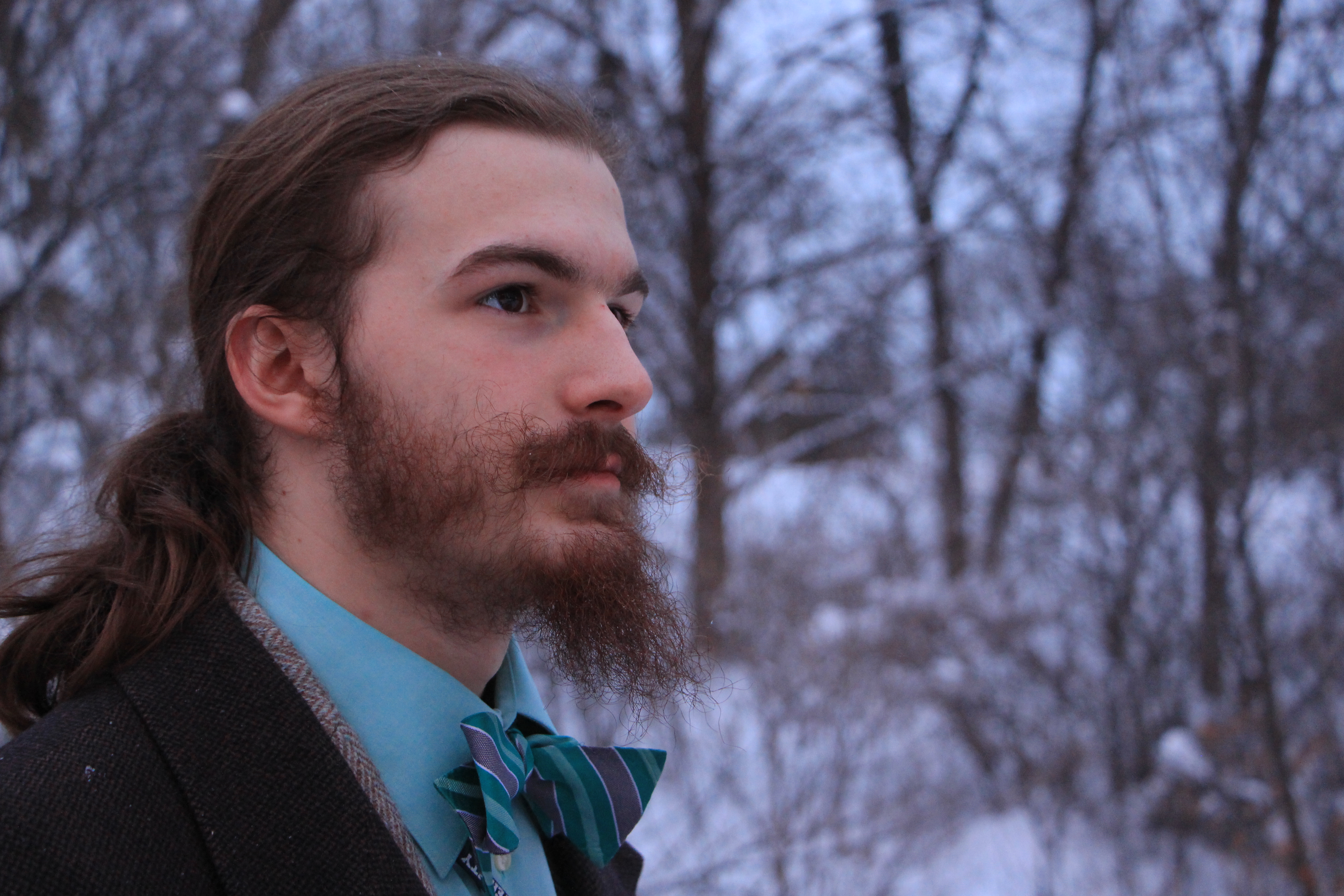 Freshman Seth Haskin embodies the old days one suit at a time.

Seth Haskin spied on two families from a Dennys’ booth. Holding the laminated menu, he glanced from pair to pair, split by era, trapped motionless in only two dimensions. On one side sat a father and son adorned in the fashion of the 1950s. A three-piece suit and striped polo ordering dinner. Across from them, a similar family sat 60 years in the future. Haskin, adorned in a suit and tie, his daily garb, grinned at the older pair. The grin remained as he ordered a bacon cheeseburger.

Haskin, a freshman at Bethel University, looks out of place. Surrounded by ripped jeans and hoodies, he walks the halls like a Dickens character would walk a cobblestone path. A top hat is placed firmly upon his head in the winter. Bow tie and suspenders always.

“Everything I’ve worn was never in style,” Haskin said. “I’ve always had my own style.”

He strolls with umbrella or cane in hand and turns heads. Fellow students snicker at his choices. His vest, jacket and ironed slacks. His four-inch beard, chops and curly mustache. They don’t know why he does it.

“I wish I had that strong of character,” Seth’s mother Heidi Haskin said.

This is a story about being yourself. About putting aside stereotypes and rising above cultural norms. Simply being present.

Eighth grade Haskin stood amidst a crowd of screaming fans watching the Christian band Gungor perform. Lyrics blasted out of the overhead speakers while colored lights scanned the venue. All eyes were forward. Haskin’s eyes were slightly up. He carefully tracked the movement of the bowtie wrapped around the neck of  lead singer Michael Gungor as well as the matching suspenders.

The next day, he emulated the singer’s style. And continued every day after that.

A reel-to-reel film recorder sat in his bedroom during his childhood. He tinkered with its parts and studied its mechanics. YouTube videos played in the background, educating him on its inner workings.

A faint tick emits from inside his jacket pocket. His grandfather’s pocket watch reminds him of a simpler time.

In an environment where phones have become faces, Haskin keeps his on his belt clip. Along with a tan fanny pack containing band aids, ibuprofen, and wet wipes, his iPhone 5 stays grounded at his waist, allowing his eyes and mind to wander. He yearns to look at the face of another human. Someone not caught up in trends.

“I want people to stop looking down,” Haskin said. “I want to be the start of looking up.”

His style turns heads. Those heads look up.

He promotes this mindset of presence not only through fashion, but through service.

On a high-school class trip to Chicago, he demonstrated that service. Sitting on a padded seat inside the Chicago Theatre, he viewed Hamilton alongside thousands of other fans. A white handkerchief embroidered with his first initial hid inside his coat. A woman nearby would soon find solace in its soft folds.

“Do you know the etiquette behind it?” Haskin asked when commenting on handkerchiefs. “If a woman cries, you give it to her.”

A woman did cry. And Seth was there. Tears streamed down the face of a chaperone in the group after the show. Seth was quick to act, revealing the handkerchief and comforting her like a 1950s protagonist.

His etiquette is just another way Haskin stays present in the world. Another trait that makes him an individual. An individual who values those around him. His friends, his family, everyone.

While attending grade 10 and 11 at Oxford High School in Alabama, Haskin was notified by his parents that they were moving to Wisconsin. Away from his show choir group: the first real friends he ever made.

He informed the choir of the news, even though it wasn’t good. They made it into something special. Something to be remembered.

On the second to last day of school, Haskin walked into the choir room like any other day. However, the tables had been adorned with party decorations. Streamers lined the walls and a cake with the words, “Ohana means family” sat at the center of attention.

“They knew I liked Lilo and Stitch,” Haskin said.

Haskin’s eyes welled with tears as he accepted the gesture. Then his choirmates brought out a t-shirt and oversized card, both covered with signatures. The shirt was Haskin’s outfit the next day. He wore it with shorts.

After leaving the group, he made a new one. Friends he never thought he would make. One year later, he hauled bowties, suspenders, and bedsheets into a basement hallway full of Bethel freshman. After a semester, they now know he is more than his clothing.

“If you just look at him, you don’t know him,” Haskin’s floormate Micah Posavad said.

Seth Haskin looks out of place. He knows it. It’s what makes him who he is.

“I try not to think about what other people think,” Haskin said. “I just like dressing this way.”