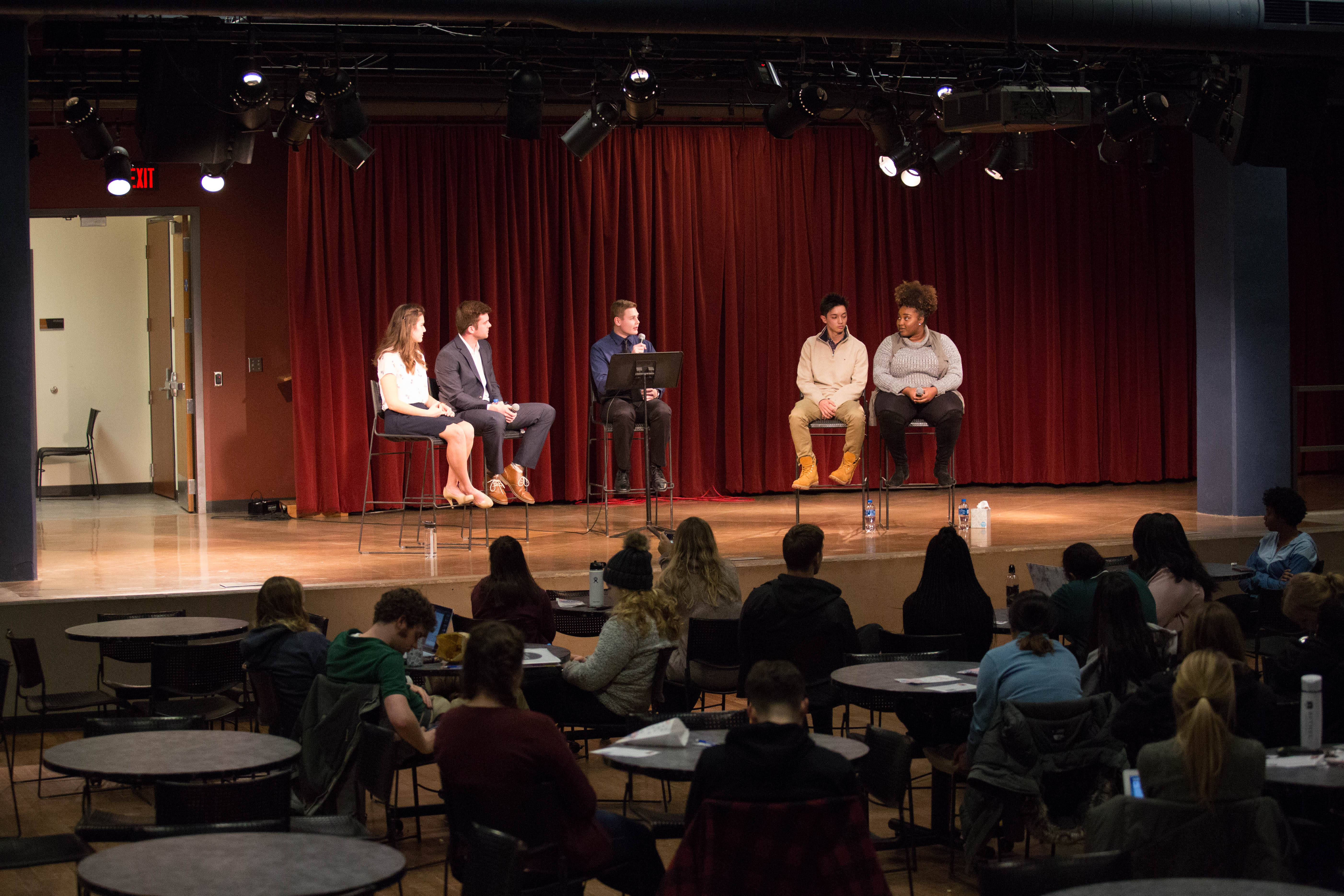 BSG Candidate pairs share their opinions and goals for their presidential campaigns.

“Riptide” by Vance Joy echoed against the walls of the Underground Monday night as two candidate pairs running for Bethel Student Government leadership took the stage for a public debate. Bags of fresh popcorn and BSG notepads laid on a fold-out table and students started to trickle in, completely filling the set tables.

In the informational handout provided to the audience, both candidate pairs were provided the space to state their goals and hopes for their presidential terms.

“We are passionate about advocating for those who feel that they don’t have a place or voice at Bethel and aspire to make Bethel a better place for every student that goes here,” Doherty and Curtis’ statement said. Doherty and Curtis summed up their campaign in two words: accessibility and inclusivity.

Each pair had a chance to share their answers to three planned questions while the other stepped out into the hallway. From there, all audience questions were sorted through and brought to Turek to ask the candidates.

Doherty and Curtis’ network of connections on campus includes a wide variety of groups that may have been previously underrepresented by the student government, they said.

“We’re ready to work for change and work for those communities,” Curtis said.

When looking towards these possible changes, Doherty said that they hoped to expand the Cultural Connections Center space as well as provide open student forums. Representatives from BSG, Student Life, administration and other leadership positions would be available for people to voice their visions, questions or concerns where they know they will be heard.

This opportunity would help with “shortening the distance between the student body and BSG,” Doherty said.

Bentrud expressed the great length of time it takes to get accustomed to a role like this and explained how beneficial it would be to continue in this role next year.

“Being able to start with our feet on the ground running in the fall would be a huge leg up and we would get a lot more stuff done,” Bentrud said.

Building off their two choice words of partnership and connection, Anderson explained how these two factors would play a role if they returned to office for a second term.

“It would be our hope and prayer that if we were given that opportunity that we could be familiar resources that people would be comfortable having hard conversations with and bringing issues to and having that foundation of knowledge would be able to do so much more,” Anderson said.

Following the event, students mingled and filtered out in groups, discussing the content of the debate with one another. A few voiced their appreciation for this chance to hear directly from the candidates.

“I think the audience questions were helpful because they were right on the spot, real answers, no preparing,” freshman elementary education student Destiny Thomas said. “If it’s about the people, they want to know what we’re thinking.”

BSG Senate member Elena Portillo added to Thomas’ sentiment, commenting on the beneficial nature of a public discussion like this.

“It allowed for them to show vulnerability because sometimes it’s hard when you’re in a leadership position to be able to show that,” Portillo said.