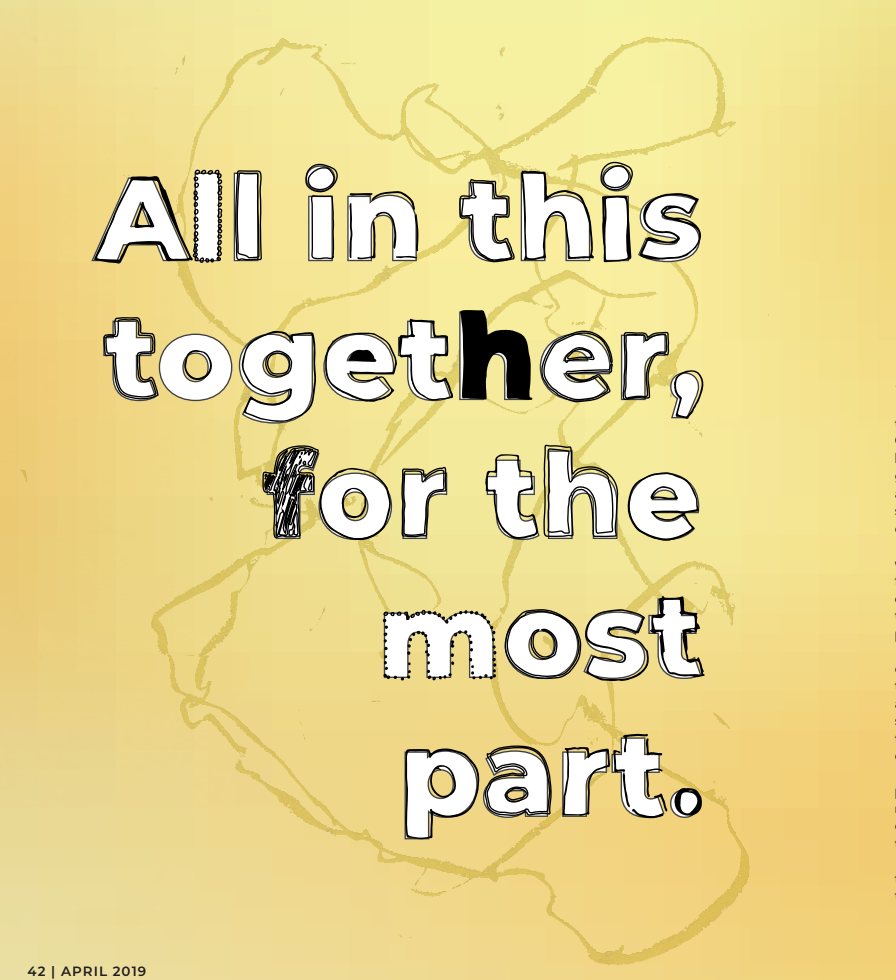 Two introverts share insight on the glorified community in the Bethel Bubble.

By Jaimee Hood and Lindsey Micucci

Jaimee: Soft sunlight streams in through the big windows in the Brushaber Commons. A late afternoon buzz has settled in the air — huddled groups of friends quietly converse around the round tables by the staircase, the occasional loud laugh cutting through.

I sit at a table of one, purportedly working ahead on some readings for Humanities, but I’m completely distracted, completely present (for the first time in a long time) in this place.

Two guys have entered into an embrace, their girlfriends leaning their heads together to giggle about something. It makes me smile, to be an outside observer to the innocent atmosphere friendship creates.

And then I start to wonder: Do people see that when they look at me? Do they feel as though they are on the outside looking in, wishing they had some missing piece?

Even with the head-knowledge that we are all lonely from time to time, I sometimes begin to wonder how things could have been different. If I chose a different college, a different major, a different personality; if I talked to a different girl the first day of Welcome Week, if I raised my hand instead of staying quiet.

Although I was a full-time PSEO student at Bethel my senior year of high school, I never considered going to college here. My first “true” freshman semester, I went to Belmont University in Nashville, Tennessee. Then, I transferred back.

And now, sitting in the BC on the verge of exhausted tears after a year of transition, it’s difficult. It’s difficult to remember a distinct feeling of home as I walk around campus on a Wednesday, on autopilot.

Here at Bethel, we talk a lot about community.

For some, there is a strong sense of connection here. Yet there are many who feel the community is obsolete, who feel like outsiders looking in.

Why do we feel that way?

What does community mean, and what does it mean to us?

“There is a sense of loyalty and trust, and care and support is readily offered without the expectation of receiving anything in return. The system is only as strong as its weakest member, so it’s important to care for each other willingly in order for the whole group to thrive.”

“Welcome home!” is the battle cry on freshman move-in day. Upperclassmen on roller skates wielding mini-fridges create a joyous scene on the hill and in front of Nelson, complete with matching sweat-stained shirts and smiles that stretch from ear to ear.

Most everyone puts on a brave face, but if you look long and hard enough, it’s easy to tell who’s ready and who’s struggling to fake excitement.

Weren’t we all a little intimidated when we first moved in?

Lindsey: Bethel is small. It’s gated. It’s strict on parking tickets. It lacks diversity. The campus has more squirrels than men, although it does have free laundry which is an up from Northwestern. The gender ratio might also explain why I have seen so many Bethel students on dating apps. Even I admit that I have dabbled with Bumble for the pure joy of meeting a new batch of people outside of the Bethel Bubble.

When I brought my boyfriend on campus to meet some of my friends in the BC, he asked my fellow classmates Josh Raabe and Ally Pehler how they liked the Bethel community and I let out a small, seemingly inaudible, groan thinking it would mirror the mood of the response. But what I found made me feel small and childish, a black sheep. They replied with smiles and professed their love for it. I hid my face by looking elsewhere, to which David gave me a sympathetic look.

At times, I feel rooted in my position that Bethel’s face is just a facade. That underneath the welcome signs and university propaganda, I didn’t fit the mold. And when I walk through the halls, look for seats in the BC, walk my routine route to work and back, it can feel isolating and everyone is going through the motions sometimes for weeks on end.

Was I the only one? The sole outcast? Certainly not. I have sat in dorm rooms and on hall benches with my friends who have confessed, “It’s lonely here.”

I am one of the introverts here on campus. I see the community as outgoing. But maybe the community at Bethel isn’t what I want to be a part of. Maybe that’s why I get a sour taste in my mouth and I search for ears elsewhere to hear my cry for help. An old roommate of mine has said time again, “Bethel is just carbon-copies of each other.” No one tries to be themselves. And maybe that’s true because when we have tried to be ourselves, we have found that we don’t fit into the community at Bethel.

“I keep to myself because I never felt that Bethel wanted to know me,” said senior communication and media production major Arianna Johnson about the exclusivity of the Bethel community.

Senior environmental science major Rochelle Dressel lived in Edgren her freshman year. “At first, we did a lot of stuff together as a floor, but then that dwindled away. I think my experience on my floor affected how I see Bethel. It seemed like there was this whole community but it just ended up being a clique and people that weren’t in the group didn’t have a place. There were just a few of us [on the floor] that didn’t make it into the final group, however that was decided.”

This sense of exclusivity isn’t just social. It also extends to the conversations which feel acceptable, and conversely, those that do not. For example, the faith conversation. Sophomore biokinetics major Sarah Arend said “since there is so much social pressure to be ‘Christian’. . . there aren’t many spaces to discuss the idea of ‘God’ . . . I think this is a discussion that needs to be had more often, or at least become less stigmatized.”

In fall 2017, senior environmental studies major Elyse Melling transferred in from the University of Northwestern in St. Paul. Melling has fond memories of hanging out in her older sister’s dorm at Bethel; she saw that her sister and her roommates were not merely “situational friends,” but had a real, close bond. Melling has found that Bethel within the environmental program who study together and hang out outside of class.

“I think overall I’m really happy with my decision,” Melling said. “Before I came to Bethel, I didn’t even know that environmental studies was a thing and now I feel like I’ve found my niche here. Even working with Fac Man, that’s a great group of friends. It’s been a positive experience.”

On weekends, I venture away towards the city, where I say to my friends, “I’m gonna go experience some culture.” Also known as Dinkytown. The place where a lot of freedom resides, which includes the choices for sex and the occasional drug deal that happens in front of my table at the coffee shop. Through the barista’s aux cord, BROCKHAMPTON and The Smiths play through the surround speakers.

But on those weekends, which happen often if weather allows, I find myself getting to know myself better, finding myself, but being solely by myself. Aside from friendly smiles and being more interested in people-watching than reading American history, I am alone, without community, yet I feel closer to those on University Ave than Bethel Drive.

I laugh while I reread that line because that is how I feel each day I set foot on campus, in a community but not of it. I think that’s how a lot of people feel. We’re isolated, without any true connection with exception of three people or so. There is gossip and ridicule. From people I’ve talked to, I know that I am not the only one to spend precious hours debating whether someone has something against me or is only admiring me from across the BC.

Sitting in the BC or on a couch in The Purple Onion doesn’t mean you’re in a community. It means you have a preference in where you spend time alone. When I think of Bethel community, I think of loud, “carbon copies,” and blondes with perfect hair. And only when I see people having honest conversations in the grill or in the Loft am I struck with jealousy.

The Bethel Bubble is a common thing placed under scrutiny, by Bethel’s own students, professors and students of neighboring schools, but professor of physics and engineering Brian Beecken advocates for people to see the Bethel Bubble as a positive thing. “I think that’s a wonderful thing. What is a bubble? A bubble is spherical, why? Because a bubble wants minimum surface area and a sphere has the least surface area. So everything is enclosed within a minimal amount of space and that’s what gives you community.”

Jaimee: I don’t always feel that strong, grounding sense of community so heavily advertised by our school. I get little glimpses, though.

It’s not at organized events or in chapel or during class; it’s the little moments. It’s during freshman move-in day when hundreds of new students and their families lift their hands in worship at orientation.It’s on the drive back to my dorm after Thursday night small group when I think to myself this wasn’t a route I knew even three months ago, and now it’s my way home. It’s sitting in the dining center on a Tuesday evening across from a person I never would have known had we not both shown up in this suburb.

Maybe community isn’t meant to be some programmed, systematized thing. Maybe it’s the individual adventure, the search for those almost-missable daily moments that make us think “oh, I’m home.”

Lindsey: 1 Corinthians 12:20 says there is one body, but it has many parts.

I hear this verse quoted when people talk about community at Bethel. Not everyone is a person of faith here, but not every Christian is accepting of others here. We’re not called to be best friends at Bethel, but still, how can a true community feel so lonely at times?

1 comment on “Opinion: All in this together, for the most part.”