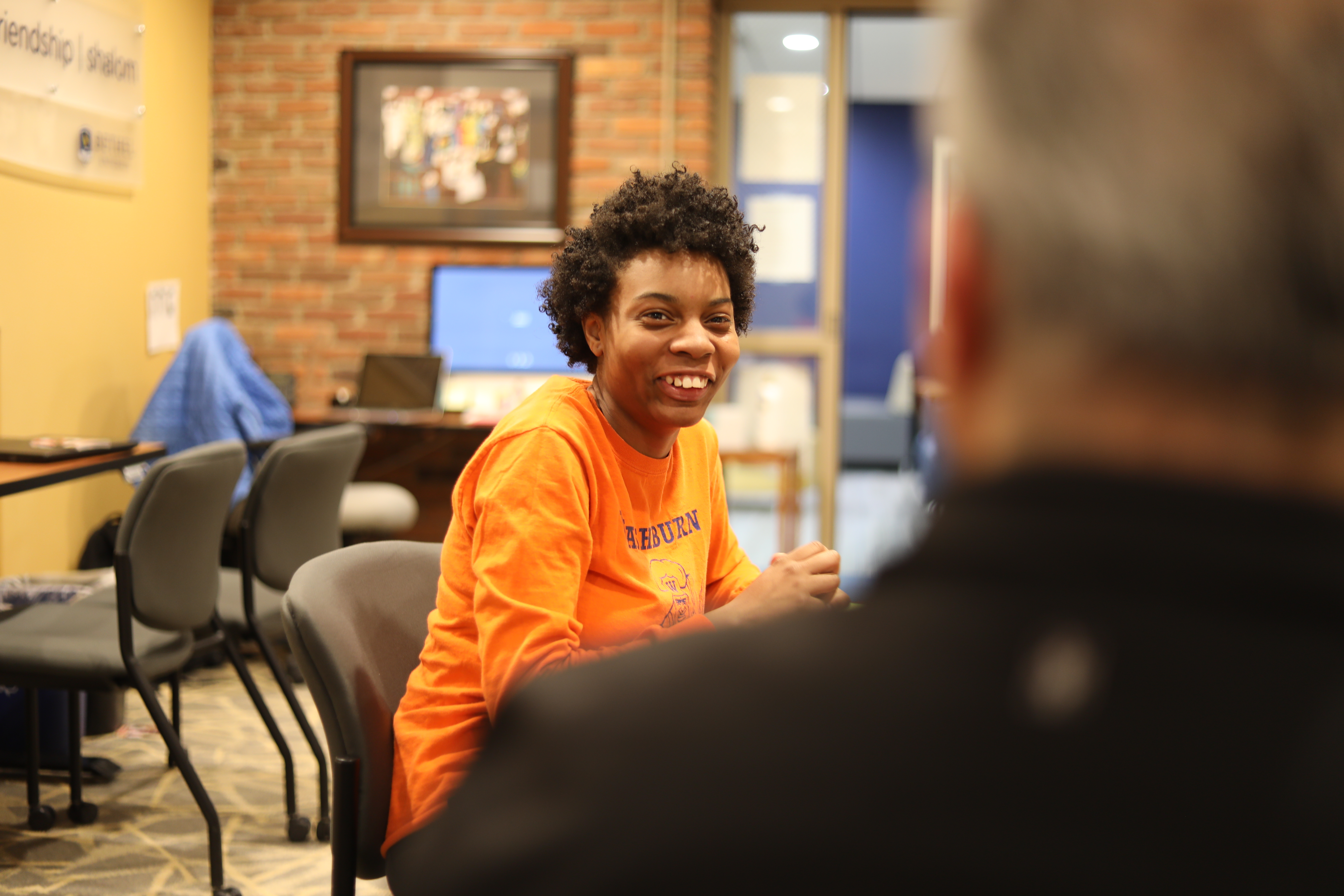 Chief Diversity Officer Ruben Rivera discusses exclusive Christianity and tackles what it means to be a reconciler amidst diversity in Bethel University’s community.

Junior Hilda Davis knows what it’s like to be the only one.

Pulling up to Edgren Hall at Bethel University her freshman year, she knew that it would be different from Champlin Park, the diverse high school she spent her last four years at. What she didn’t anticipate was the lack of connection she would feel with the rest of the student body because of that difference.

Davis was shocked during Welcome Week as white students flooded the campus, but she couldn’t seem to find many students who looked like her. She sat in several general education courses in which she was the only student of color. When she greeted a group of girls on her floor, she was met with little response.

Discouraged, Davis reached out to her resident assistant about her difficulty to feel a sense of belonging on campus. The response she received was, “Oh, I’m sorry to hear about that.” And that was it.

Davis, along with many other students of color, have appeared on Bethel’s pamphlets in an effort to market a diverse and welcoming campus. Davis finds herself “ducking and diving” when she sees a photographer in Brushaber Commons, because she knows he’s going to ask to take her picture.

“The photographer that walks around makes a point of following people of color,” Junior Sean Doherty said. “If you ask any person of color on campus, they can tell you they’ve been followed by a photographer. I don’t think it’s very reflective of how Bethel is as a campus.”

Davis finds the Cultural Connection Center to be a safe place to go when other areas on campus are not so welcoming.

“I think it’s not a hideaway, but it’s a space for rest. To exist in a space where my culture is not the norm, I’m going to do everything I can to survive outside of that,” Davis said. “We see what happens when people stick out, you know what I mean? It’s not welcoming. It’s not. As much as we claim it is, let’s be real.”

Davis’ experience raises questions about what it is like for the majority of students of color in the world outside of the CCC on Bethel’s campus. What is it like to be the only Asian-American on a dorm floor? The only African-American student in a classroom? The only Latino on a sports team? And what does a space like the CCC provide for these students?

Esther Jones, a 2017 graduate, shares why the CCC is such an important asset to Bethel University.

“White people generally feel welcome on the whole campus. Bethel is a predominantly white institution, and white students can walk pretty much anywhere and feel welcome… It [the CCC] has been a long project coming, and so 15 years later we finally get this tiny little closet,” Jones joked. “It is one space on campus that is intended explicitly to be a friendly and welcoming space for students of color specifically. Unfortunately, the rest of the campus is not always like that.”

Designed as an inclusive space with a purpose to foster connection for the entire Bethel Community, the CCC’s goal is to provide students of color with a sense of solidarity and a place to belong.

Sophomore TyTeeona Howard wants all students to know that while the CCC is an open space for light-hearted interactions and friendship, it is also available for safe conversation about race, religion and sexuality.

Howard knows what it is like to be in a classroom when topics such as race or religion come up and the majority of her classmates have different viewpoints than her.

“I think, for me, I’m comfortable talking about these kinds of issues, because I’ve been raised to talk about these issues,” Howard said. “If I feel like it’s my time to speak on it, I’ll speak on it, but I also know when it’s important to just sit back and listen to what other people have to say on those issues.”

Other times, it’s more difficult. Davis recalls her freshman year when her lab partner jokingly called her a slave.

“I was out of myself in that moment. I couldn’t even believe what happened,” Davis said. “I think about that often. I see this girl often. I get so angry when I see her, honestly.”

After Doherty discussed his Asian culture as a relevant aspect of his campaign during the Bethel Student Government presidential debate, several people approached him and told him he “had looked more Hispanic to them.”

“I interpreted it as a negative thing because it’s not a conversation people will have with you,” Doherty said. “They’ll look at you; they’ll make biased assumptions… People aren’t going to talk to you about your culture here, even though it’s a very relevant thing. It’s my lens to view the world.”

Dr. Ruben Rivera, Chief Diversity Officer and co-founder of the CCC, said proper discussion and understanding surrounding the idea of diversity is important on Bethel’s campus.

“Bethel deeply cares about diversity. I know that. I know there are times when maybe some people don’t feel that, especially if you are a student of color,” Rivera said. “Some folks never actually feel like they found a home here, and that’s a bit of a challenge.”

Rivera became the Chief Diversity Officer at Bethel four years ago when Jay Barnes personally called him to his office and told him he was the only one fit for the job. Initially, Rivera wasn’t so sure.

“I told Jay, ‘You know, I’m not the Chief Diversity Officer, you are,’ Rivera said. “And what I mean by that is, if the university doesn’t get that this is important from white folks in top levels of leadership, then hiring another brown guy to do this is really not going to work.”

Rivera developed and introduced a new model of diversity training called Shalom Seminar I, which is the introduction that new staff and faculty go through when they come to Bethel. Rivera found that trainings used in the past were often too optimistic for the realities of many different races, ethnicities and political ideologies and hoped to accomplish too much for the brief duration of the training.

He also felt that ironically, there was not enough diversity in diversity trainings. As a Latino, Rivera never felt represented in trainings that mainly featured only black and white dialogue. He never felt challenged, recognizing that the trainings pushed largely for white people to get their act together but never featured a call to action for other demographic groups.

“The goal of [BARCC] training is not to convince people of the reality of racism, but to create anti-racist allies,” Rivera said. “I just felt that was unrealistic in a four-hour training.”

With Shalom Seminar I’s approach, Rivera hopes participants will gain a basic understanding of biblical shalom and discover the ways in which sincere Christians, regardless of race, gender or politics, can unknowingly engage in what he calls culturally captive, ingroup Christianity.

Maddie Hollander, student director of United Cultures of Bethel’s subgroup European Americans in Solidarity, discusses the importance of white students engaging in these types of conversations on campus.

One of his strong rules is that diversity training requires understanding the values of the community he is working in. Otherwise, he claims, community members are not going to understand the mission.

Looking toward the future

Rivera’s first objective is to continue to increase diversity – there is no substitute, he says. Most of his time at Bethel, the percentage of CAS students of color has been in the single digits. Now, numbers have grown fairly quickly – at all of its schools, Bethel has reached a new high of 20.6 percent students of color in the 2017-18 school year, largely due to the Act Six program and growing relationships with communities of color.

Bethel is beginning to cater to an increasingly diverse student body with the formation of the CCC in 2015 for students of color; Prism, a group for LGBTQ+ students formed in 2018, and most recently, the formation of Catholic Students Association (CSA) in February 2019.

Sophomore Ashley Thrun, a member of CSA, discusses why these groups and spaces are so important for students.

“I think that people crave to feel like they belong,” Thrun said. “Having these different groups allows a space for people to feel safe and comfortable and like they can talk about something that is very common among the entire group.”

The second objective is to build the institutional capacity for the diversity to actually work. Christianity is still very individualistic for many people, Rivera suggests. A myriad of people, Christians included, meet people they have never met before and have already created a story about them within the first few minutes of interaction.

Howard recalls her first year in the freshmen dorms when she was accused of stealing a floormate’s piece of clothing. Out of all of the people allegedly involved in the situation, Howard was the only student of color. She was also the only one who was addressed about it.

“Nothing really came after that, I just feel like they kind of cut me off after that,” Howard said. “I guess they assumed I was lying or something.”

In an age of the dehumanization of undocumented immigrants, Muslims and other groups, Rivera prompts Bethel community members to ruminate on their equivalent to a Samaritan in today’s society. Further, he challenges them to ask, “Am I good a neighbor to those I would normally ignore or shun?”

Rivera instead calls for “remarkable Christianity,” Christians who are not centered on the mentality of Samaritan vs. Jew, us vs. them or conservatives vs. liberals, but instead horizontally reconcile themselves to those who are different and historically undervalued in society.

“It was something that was so heavy and so hard,” Sanchez said. “Having that happen when I identify as a Hispanic or Latino person, and that’s something that my community is facing… It was hard finding a space where I could completely open up the conversation.”

Looking to the future, Sanchez simply hopes for more students of color to feel empowered to share their voices on Bethel’s campus.

“As a student of color who is a first-generation college student, who has a huge passion for change in education and loves pursuing my dreams… I just think it would be super cool to see the different changes that could happen within the new incoming students that will be at Bethel,” Sanchez said.

The third and final objective Rivera strives for is to increase diversity among Bethel’s faculty and staff. Bethel’s community recognizes that the university is becoming a more diverse student body, but many students wish they could “wave a magic wand” to see that change among the faculty and staff as well.

Rivera has been the Chief Diversity Officer at Bethel for four years, and while it has not been easy to facilitate understanding amidst a society of division and “cultural captivity,” he knows his work is important.

“It’s a minefield to be in. It’s beautiful and terrible… you’re a bridge, and bridges get walked on by everyone,” he said. “It’s not a job that everyone can do forever, or at least you have to find ways of continuing to fill yourself.”