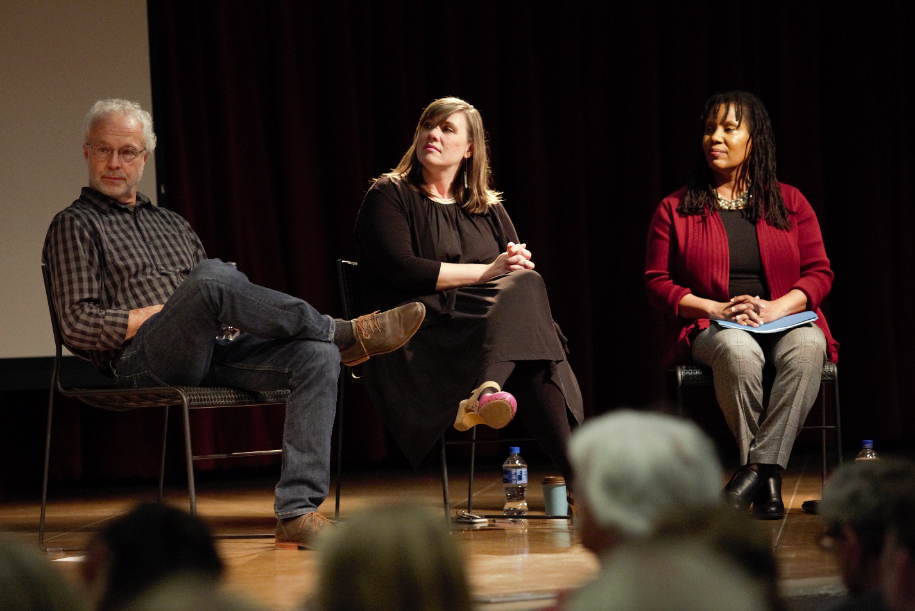 The Underground was packed with students and faculty Wednesday night for The Paradox of Beauty panel discussion. Art professor Wayne Roosa, philosophy professor Carrie Peffley and English professor Angela Shannon engaged in discussion about The Beautiful, the new exhibit in the Olson Gallery. The exhibit is sponsored by Christians in Visual Arts and features 33 artworks focused on the theme of beauty in the fallen world.

Art professor, gallery director and CIVA board member Michelle Wingard moderated the event. Roosa gave a thoughtful musing on the different paradigms of “classical beauty” and the expression “beauty is in the eye of the beholder.”

“Beauty is not a thing,” Roosa said. “It is more like an agency, the living dynamic.”

“The beauty of true art is embracing the messiness of reality,” she said. “Sometimes what is beautiful is not pretty.”

Peffley used examples from God in the Gallery by Daniel Siedell and w by Milan Kundera to further explain her point of view.

Shannon followed Peffley and used two original poems, “Our Wholeness” and “The Light of Books,” each based on an artwork in the exhibit. She also read Gerard Manly Hopkins’ poem “Pied Beauty.”

After the three panelists shared their individual perspectives, they collectively discussed four chosen pieces from the gallery. They started with Tessa Davidson’s piece “30 Bathrooms.”

Shannon brought up a story of connecting with a student in a bathroom. The discussion then turned to works by Lynn Aldrich and Wayne Adams. Adams’ piece sparked interest, due to its unique composition and ambiguity. Shannon related Aldrich’s piece to the letter N. Peffley called Adams’ piece “a beautifully ugly object, repulsive and seductive.” The final piece discussed was created by professor Ken Steinbach, who was in the audience and able to additional context and background information.

After the discussion, there was a reception in the Olson Gallery for students to view and discuss the artwork themselves.

The Beautiful is a traveling show. After leaving Bethel June 18, the exhibit will be featured at many other venues in the next three years. This collection of works will remain at Bethel until the CIVA conference, which will mark the 40th anniversary of the Bethel-born organization.