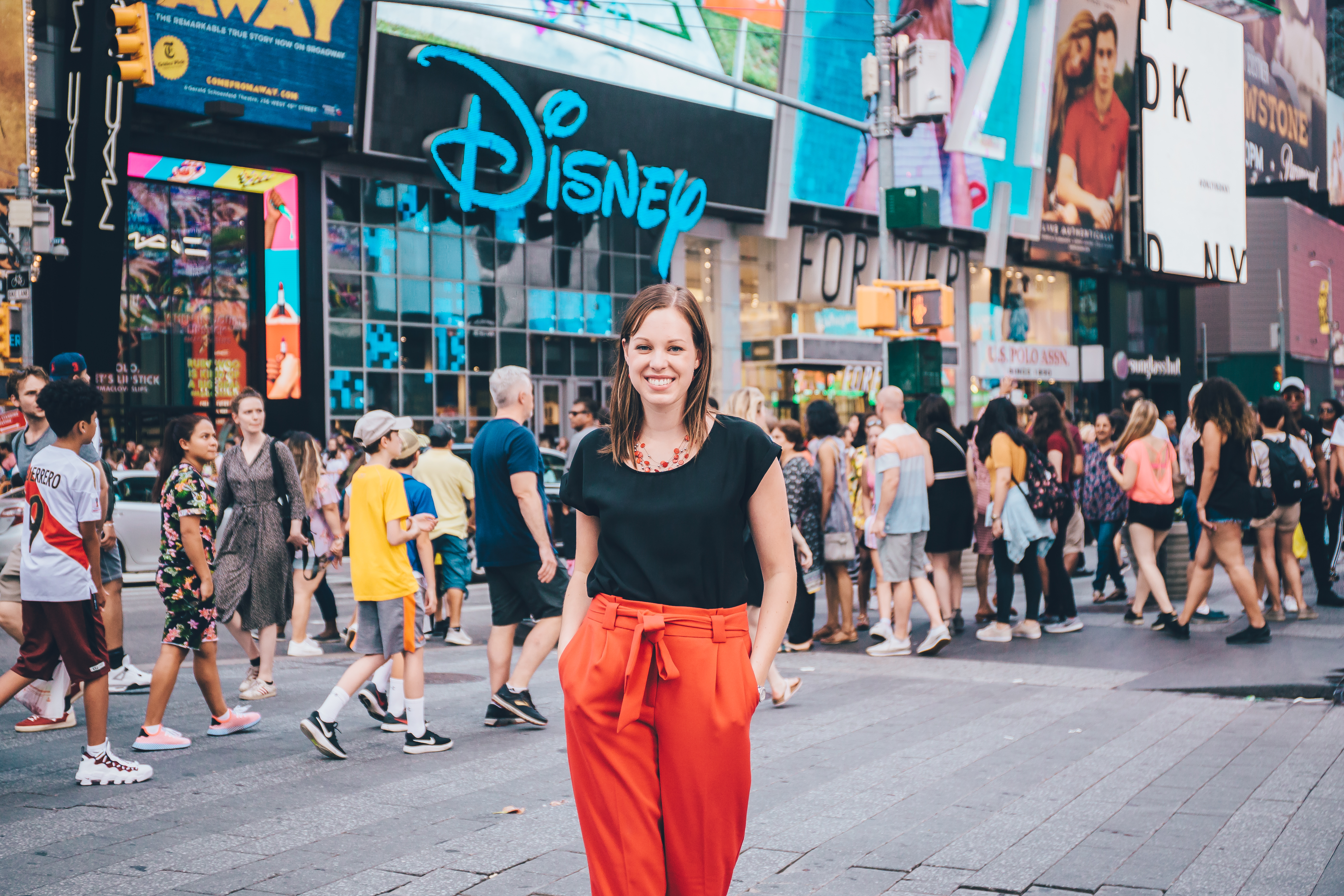 Lacey Benz studies at Bethel and learns to fuse her faith and business career together.

By Judd Martinson and Emma Eidsvoog

Lacey Benz went from growing up on a farm in Blue Earth, which has about 3,000 people, to studying at Bethel, to riding the subway and interning in New York City for JPMorgan Chase & Co.

Now studying economics, finance and international business at Bethel University, Benz knew Bethel was the place for her after seeing a Welcome Week video during her second visit to campus.

“I just knew at that moment, ‘Wow, God has called me here to Bethel,’” the Bethel senior and Chief Investment Officer of the Royals Investment Fund said.

Since studying at Bethel, Benz has noticed the difference between her classes at a Christian university and her secular high school.

“In every single class I take faith as an aspect that we talk about at least once if not twice during lecture,” Benz said.

Bethel Associate Business Professor Bethany Opsata implements assignments helping students connect their business work to their faith. In a management class, assignments include reading Bible passages and relating them to the content in a management textbook.

“As a Christian business person, your philosophies of how you approach your work should change. They should be different than just the typical person,” Opsata said.

Benz compared class sizes of about 20 students at Bethel to a friend’s experience with classes of about 500 people at Iowa State University. Because of small class sizes, students have easy access to professors at Bethel.

“Students come in here and tell me their brokenness,” Associate Professor of Business Brian Holland said. “Those are the kind of conversations I get because I expose them to my spiritual walk and they know that I’m not judgemental. I’m willing to listen and I’m trying to impact them in a positive way.”

Another professor sat down and encouraged Benz to study economics and finance. Now she has a position lined up working in global finance and business management awaiting her after completing her studies.

After her second year at Bethel, Benz applied for an internship with JPMorgan Chase & Co. she came across online. A couple weeks later, she got an email asking her to fly out to New York for an interview.

After a day of interviews, learning about the internship program and touring the offices, Benz flew back to Minnesota. She found out she got the internship about a week later.

“And so when I’m thinking about things, whether in business or whatever… is it pleasing to God?” – Lacey Benz

The spring before working in New York, Benz met an employee of JPMorgan Chase & Co. on a Vespa tour while studying abroad in Italy. She found out he was also a Christian, and the two stayed connected during the summer.

“I felt like if I had anything wrong, I could go to him and he would be there,” Benz said.

While in New York, Benz worked with interns from schools such as Harvard or Yale. Benz said it was intimidating coming from a small school to New York, but her study abroad experience made the adjustment easier. However, she said her education stood the test. She’s heading back to work for JPMorgan after graduation.

Bethel Associate Professor of Business Amanda Carter received her undergraduate degree from Yale University, where she said faith was viewed as counter to intellectual thought.

“In the classroom it was almost taboo to talk about faith,” Carter said.

Carter sees something different at Bethel. She said they talk about faith integration in every aspect.

“And so when I’m thinking about things, whether in business or whatever… is it pleasing to God?” Benz said.

So how does the business department train students to enter the business world and fulfill God’s purposes for them? Professor of Business Leo Gabriel teaches students to act on their faith and help people in need.

“In my tax class we prepare tax returns for low-income families throughout the twin cities,” Gabriel said.

After pulling out his Bible in his office, Gabriel read part of Matthew 25. Jesus tell his disciples about the end times when all nations and people will gather before him. Those at his right side are the people who fed the hungry, gave drink to the thirsty and clothed the naked.

“That’s what we’re doing when we do our tax work. We’re providing income for those who would not otherwise have it,” Gabriel said.

People use their refunds for food, clothing, rent and other necessities.

Beyond the classroom, the business department lets students put their education into practice while still working on their degrees through the Royals Investment Fund.

The Royals Investment Fund is an all-cap U.S. equity fund, which means they invest in U.S. stocks of small, medium and large companies. The group is a club on campus, but also a company. The LLC gets audited and pays taxes like any other company. As a company, the fund has more opportunities available for students, even those outside of the economics and finance field.

The client relations department is the sales team. The marketing department works on promotional activities such as the fund website. The operations and risk management team makes sure the company is acting within all the proper guidelines for the fund. The research team does research on stocks for the fund to invest in.

As a company, students work on being good fiduciaries of their investors’ money, which means acting in the best interest of their clients. The fund invests in companies other than Christian organizations, but not in tobacco, gambling or alcohol.

The students must steward the investment fund money. ‘Steward’ is a word alumni Dan Wanous, now the director of business development for the Thrivent advisor network at Thrivent Financial, used as well. Wanous thinks Christians have an obligation to be stewards of their resources. He used an analogy asking, “who has ever washed a rental car?”

0 comments on “From small town to the Big Apple”