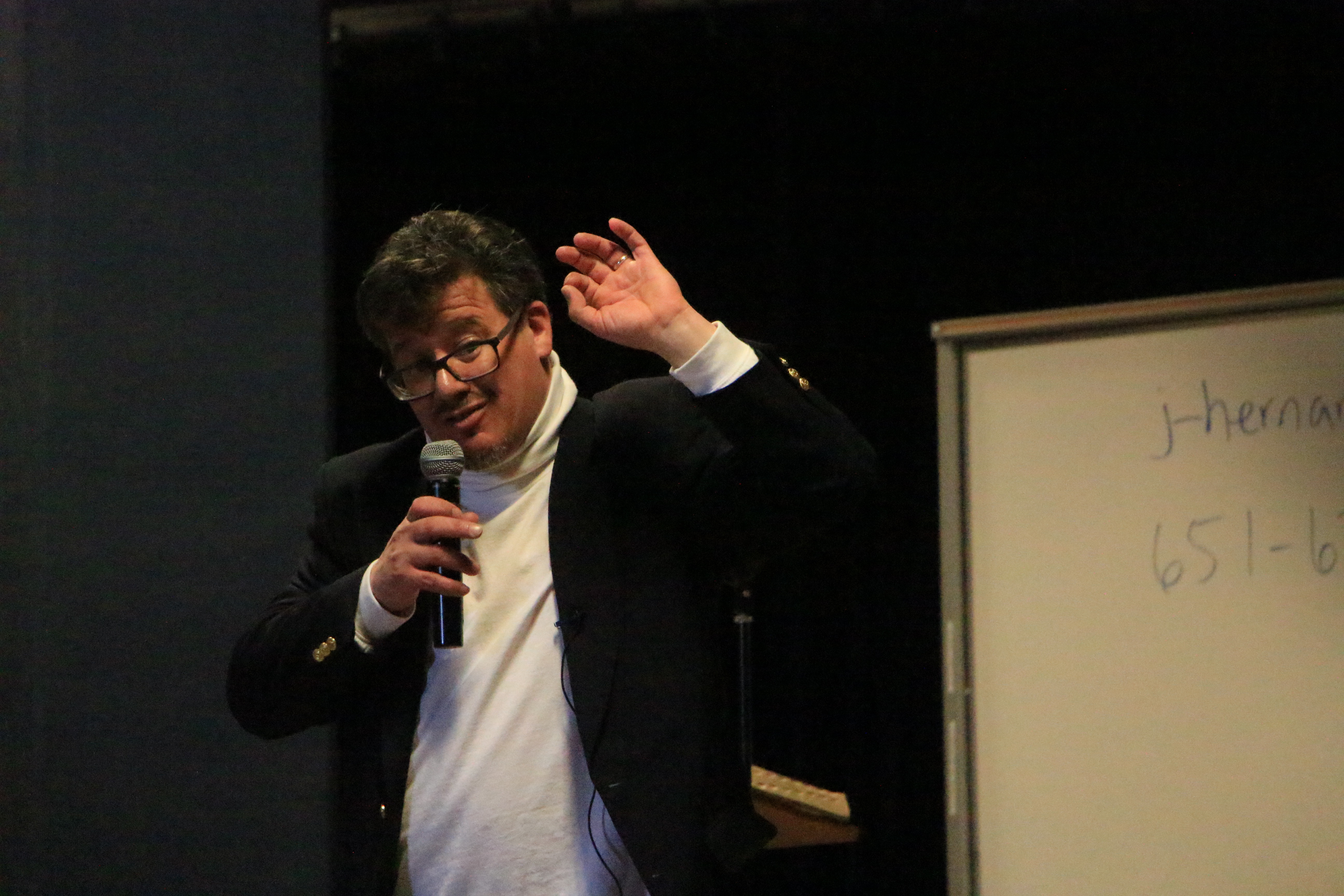 162 Minnesota Hispanics attended the 7th Spanish-Speaking Seminar for Pastors and Leaders March 30, with the next conference set for May 18.

Juan Hernández Jr. began his lesson. He gestured toward a PowerPoint on Revelation, a topic he teaches every semester at Bethel University. But this time, he taught in Spanish.

Hernández, Professor of Biblical and Theological Studies at Bethel University, led the seventh Seminar for Spanish-Speaking Pastors and Leaders March 30 at Bethel, with the eighth set for May 18.

The turnout was record-breaking with 162 members of the Minnesota Hispanic community as well as Bethel students and faculty attending the event to learn about the historical, cultural and theological context of the book of Revelation.

The previous record was set April 2, 2016, when 135 participants attended the first ever seminar, an event sparked by Bethel’s interest to offer university-level instruction to an underrepresented community of Christians.

“At a very obvious level, these are Bible studies,” Hernández said. “My real desire is more than simply to put stuff in their heads. I’m very interested in inspiring them to engage the life of the mind.”

Covering four verses over four hours, Hernández spoke completely in Spanish with the aid of an English PowerPoint. Attendees arrived armed with notebooks, laptops and Bethel-branded paper to document the day’s teachings.

They hailed from congregations across Minnesota and played roles varying from Senior Pastor to Small Group Leader.

The Underground, a community space at Bethel, was filled with cheers and claps and laughter. The attendees absorbed every line that appeared on the screen and every word emitted from Hernández’s lips. The silence of listening even seemed to touch all four walls.

“Some of the stuff he is teaching is so deep.” Maranatha Minneapolis Church Men’s Leader Edgar Martinez said. “Every single thing he’s been teaching is something new.”

Hermán Colón sat at a round table in the front row, his chair turned to face the stage. Holding a notebook and pen, he tilted his head toward his old friend.

Senior Pastor at Maranatha Minneapolis Church, Colón reminisced about the days when he knew Hernández only as his best friend’s roommate at Valley Forge Christian College in Phoenixville, Pennsylvania. The days of poking fun at Hernández for being so scholarly.

The two men embraced during a break and exchanged belly laughs. Colón fetched his friend water after the one-hour session of Revelation analysis and reviewed his notes.

“It’s that loyalty of the Hispanic culture,” Colón said. “There’s so much love here… and appreciation for what this culture brings to the table, brings to America.”

Colón’s church, like many represented at the seminar, consist mainly of Hispanic worshippers. Most in his church are lower class, working multiple jobs to keep their families fed. Many are immigrants. Some undocumented.

Colón recounted a prayer gathering at his church where a man approached the mic and began to weep. He cried out for the government and the president and America. He prayed for them.

“If you can’t trust the government or your status or your power and… you know you have a thick accent… and perhaps you’re darker-skinned,” Hernández said. “So what do you do? You trust in God and you grow close to your community.”

According to a 2018 US Census estimate, there are approximately 300 thousand Hispanics who currently reside in Minnesota, 5.4 percent of the state population. That population has increased 9 percent over five years, climbing from 274 thousand in 2014.

The Pew Research Center reported that 204 thousand Minnesota Hispanics were ineligible to vote in the 2016 election, 65 percent of the Hispanic population.

Although impossible to confirm, odds are that some were in attendance, Hernández said.

When 160 Hispanics walked onto the Bethel University campus, they were met by more than brisk morning air. They walked through the halls with white students wearing Patagonia vests and sat at tables with professors who fill the “upper class” circle on socioeconomic surveys.

They are different from the host culture in the money they make and the clothes they wear and the skin color they were born with. But for four hours in the fluorescent-lit student center smelling of floor wax and stale coffee, they were the same.

“I was very deliberate about making sure they come here and they see the host culture, and also that the host culture sees them,” Hernández said. “You can’t call these people rapists and murderers and invaders when they’re coming here on a Saturday morning of their own volition, with their own money to talk about God and the Bible.”

To end the session, Hernández announced that there would be another seminar May 18 and asked those who plan on attending to raise their hands. Every person in the room thrust their arm to the ceiling.

“It’s important… that this not be a ‘this is our thing vs. your thing’” Hernández said. “This is a thing of which we can all be a part.”

Information on the May 18 event and the registration page can be found here.

0 comments on “More than a Bible study”