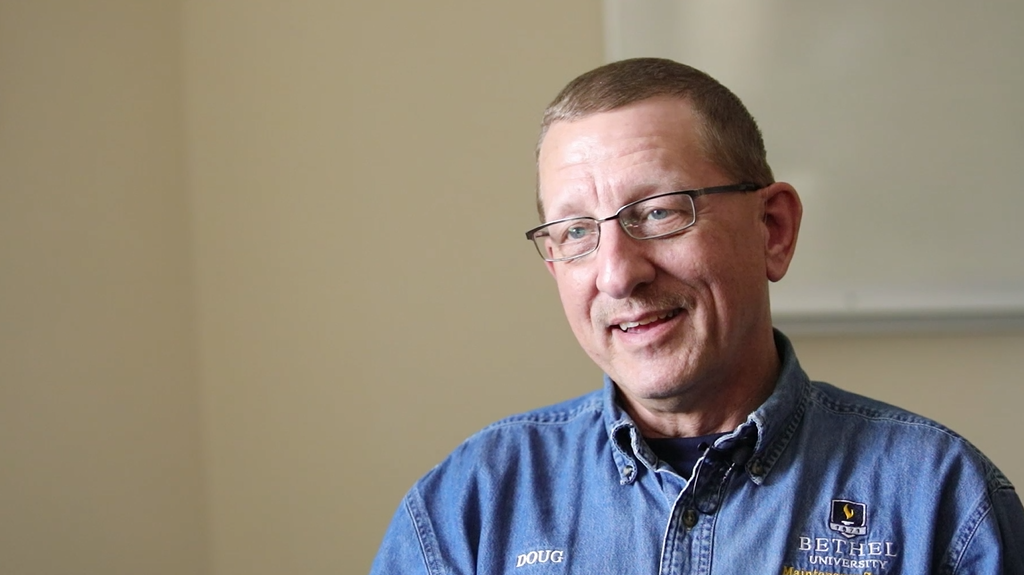 Doug Kojetin has worked as a member of Bethel’s Facilities Management team for four and a half years, but he serves the community with more than his handyman skills.

Doug Kojetin has green, blue, black and shiny keys. All kinds, he tells the Child Development Center kids, who have no clue what they unlock. But they like how the keys jangle, and they like “Mr. Doug” even more. For nearly two years, Kojetin has spent one or two days a week having lunch with them in their tiny red chairs. He cuts his breaks short so he can eat shredded beef tacos and read books to them about David and Goliath or the alphabet.

This isn’t part of Kojetin’s job description as a residential maintenance specialist at Bethel, but he makes time for snowblowing paths for the children to walk and capping all the sharp bolts on the chain-link fence around the playground.

“He smiles as he does it,” the CDC’s head teacher, Glynnis Maki, said.

She and her coworkers nominated Kojetin for the Core Value Mark of Distinction, an annual award given to employees who serve the community and advance Bethel’s mission. He caters to their convenience, peels into the parking lot before they put in work requests and knows each child by name.

“He never makes you feel like you’re taking time away from what he’s doing,” Maki said.

And Kojetin has a lot to do. During his four and a half years at Bethel, he has cleared snowy sidewalks at 5:30 a.m., replaced hundreds of bulbs in the Sports and Recreation Center’s light fixtures and been blasted by a faucet in Turnwall Hall while remodeling a bathroom. According to Maki, he’s slept in the office if a snow day might occur. Though Kojetin spends the majority of his time in North Village, he’s often seen chatting with students at Chapel or in the Dining Center.

“It didn’t take long until I realized I’m not a preacher,” Kojetin said. “I’m not a Bible teacher, but I do great one on one.”

So one by one, students have begun to notice Kojetin around campus. Even without the denim uniform and cap, he’s recognizable by what else he sports.

Kojetin sports his name on a bronze-plated belt buckle that he bought at the Minnesota State Fair in 1974. Sometimes, he swaps it for another “Doug” belt with block letters – a gift from his niece and nephews.

Kojetin sports a smile that rarely wobbles and a silicone wedding ring made to wobble. Twelve stitches circle his finger because of the metal ring he used to wear – but the scaffolding caught that one when he replaced North Village’s basketball hoops.

Kojetin sports cuts from chipping ice and scratches from North Woods’ burs. The marks testify his dedication to his job: taking care of students. Sometimes this means unclogging drains and changing light bulbs. But more often, it means asking students what they’re studying, what their dream job is and what they need prayer for. He might not know their names, but he knows how God works.

“God will talk to you,” Kojetin said. “It’s not verbal and it’s not with these hearing aids. It’s recognizing God’s voice over all the needs around us.”

Blocking out the tinkering of tools and drone of weed whackers, he hears the needs of the community. Kojetin practiced this selective hearing long before he came to Bethel. For 15 years, he tended to the needs of the Matehualan people in Mexico.

In the spring of 1983, Kojetin and Teri went to Matehuala, where they worked at Institute Betania – a connection to Bethany Global University, formerly known as Bethany Fellowship Missionary Training Center – when they attended in 1978.

Kojetin and Teri met during their first year of college. Their romance formed as they rivaled each other in Dutch Blitz cards at 9 p.m. in the dining room after mandatory study hours. At the spring picnic, they ate dinner together and decided to start dating –with Bethany’s permission, of course. The school allowed them one date a week until the second year of their relationship, when they got two dates a week during the summer.

The pair flew off in different directions for their internships – Doug to San Juan, Puerto Rico, Teri to Nassau, Bahamas – but they remained together despite only corresponding through letters and an occasional voice recording on cassette tapes. Kojetin and Teri married a week after they returned. But they didn’t stay in the States for long.

“I’m an explorer,” Kojetin said. “I like to find new places.”

This fueled his love of missions. And geocaching. When Kojetin isn’t working, he’s usually checking his GPS and phone app for geocache containers. According to him, there are 15,000-20,000 containers within 100 miles of Bethel. He’s found 2,500.

And he found 250 recordings of indigenous languages to relay the gospel to people in Mexico. During the days there, Kojetin applied the maintenance skills he’d learned as a preteen while helping his dad fix up income properties. Teri taught courses on the New Testament and the Epistles to Bible school students. In the evening, they knocked on doors and invited villagers to Bible study.

“My wife and I were quiet people and God opened us up,” Kojetin said.

They made friends with locals, including their doctor who delivered their two children, their dentist who they invited camping and the Pame-Chichimeca natives, a removed group who had to travel a day’s length to get water.

In 1990, Kojetin met a Bible translator working with the Pame-Chichimecans in the mountains. Eventually, Kojetin started bringing supplies to those working with the natives. During the rainy season, the road was so muddy they only had one vehicle that could get out of the sinking terrain. They had no electricity or sewage system. So Kojetin studied how to construct a vent pipe for their toilets – holes in the ground – to get rid of the smell.

“Many people started to realize we really care about them as a people,” he said.

The community reciprocated the care. After their daughter was born breach, the doctor allowed Kojetin to be the first dad in the delivery room two years later when their son was born. When Kojetin caught typhoid fever while his wife suffered from hepatitis, a friend from their fourplex took care of their daughter for two weeks.

They returned to Bloomington, Minnesota, in 1998 to meet their kids’ educational needs. For Teri, it was difficult being away from the close-knit community.

“That was all our kids had known, and we thought we were going to be there forever,” she said. “We had no plans to come back.”

To cope with the re-immersion, they made a list of hopes for their future in Minnesota. At the top of the list: a good school, church home and jobs. Now they can check those items off. Their kids are grown and have dual citizenship in Mexico and the United States. Kojetin and Teri are on the prayer team at River Valley Church. Teri does administrative work for Color Glo, a leather repair franchise, and Kojetin is at Bethel.

Matt McKenzie, the Residence Halls Maintenance Services Supervisor, gladly integrated Kojetin into FacMan. It may differ from the Mexican community, but McKenzie believes the crew has something more than “Minnesota nice.” When a worker is overwhelmed, someone offers to help. When hiring, McKenzie knew Kojetin wouldn’t hesitate to be that someone.

“I immediately got the sense that he was a person of peace,” McKenzie said.

After Kojetin retires, he’d like to do part-time mission work anywhere in the world. But for now, with a work order list in his pocket and kids from two to 20 relying on him, Kojetin is content.

“I can’t imagine any other place I’d rather be,” he said.

0 comments on “At your service”