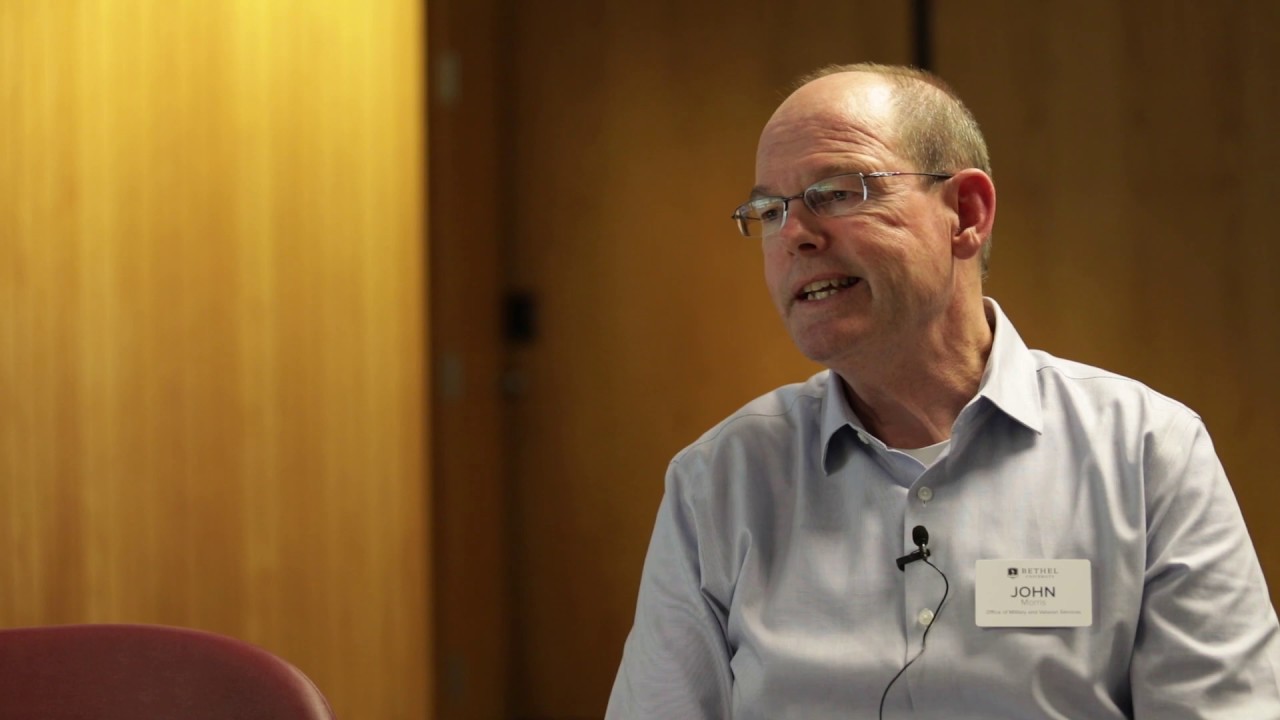 Bethel Seminary alum becomes director of the new Office of Military and Veteran Services, retiring from a life of military service and chaplaincy.

As a military chaplain, he pastored local churches and served troops overseas, spent time in the Middle East and walked alongside parishioners in southern Minnesota, pulled a soldier aside to ask about his Bible in Iraq and talked to a farmer on his front porch about the resurrection.

After finishing his last Army tour at the Pentagon, Morris knew he wasn’t ready to retire. Instead, he returned to Bethel to look for a job.

Bethel Director of Financial Aid, Jeff Olson, told Morris that he had a lot to offer. Associate Provost Randy Bergen said that they should create an office for military-affiliated students and families.

After looking at a few models from other schools, Morris helped form Bethel’s Office of Military and Veteran Services.

“It was just a way to keep giving, serve Bethel and help veterans,” Morris said.

When Bethel alum and Army Guard Chaplain Hickory Smith found out about the new office, he encouraged Morris to apply to be the director.

“He put me in good, challenging situations to help grow me,” Smith said. “I could never doubt his ability and desire to work for others and find what’s best.”

Morris said that taking on this role puts his experiences — growing up in a military family, serving as a chaplain and starting a transition program for veterans called Beyond the Yellow Ribbon — to use.

Morris gazed down at his black, thick-band bracelet and twisted it into a corkscrew on his wrist, “Cpt. Alvin F. Davis” etched in Times New Roman across the metal.

Davis died while leading a unit of soldiers August 17, 1944. They fought to free Morris’ mother’s village in France. Morris grew up hearing stories about this battle, so he searched the National Archives for records of this event. He found the names of 12 American soldiers who lost their lives, Davis included.

The engraved bracelet holds a daily reminder for Morris: he’s twice purchased. He’s an American citizen because a soldier sacrificed his life in battle, and a Christian because Jesus died on the cross.

GROWING UP AND OPENING DOORS

Morris was born at the Scott Air Force Base in Illinois in 1956. His father left Chicago to join the Air Force during the Korean War and met Morris’ mother, a French citizen who had survived World War II, soon after.

Morris grew up in a military family, attending 14 different schools in the U.S. and Turkey before graduation.

He said the Gospel sunk in for the first time on a camping trip as a 16-year-old when he met a man who was en route to a Billy Graham event. They shared a meal together and the stranger asked if Morris would be willing to read the Bible with him. They opened to John 3:16.

“It was the first time I remember hearing that verse and understanding that God loved me,” Morris said. “That led to a real hunger to know Jesus.”

“If that’s the door God opens, I’ll go through it,” Morris said. “If I gain something from seminary, then I know I’m headed in the right direction.”

After the first day of seminary, he knew the military was that direction.

Morris started as a chaplain candidate while in seminary. From there, Morris continued in a cycle of pastoring local churches and serving abroad as a military chaplain — a religious leader for service members and their families.

During a nine-year stretch in the Middle East, Morris sent emails to his daughter, former Bethel student Amy Williams, that explained moments where he saw God show up.

“God has lined up for me so many divine appointments,” Morris said. “I say everyday, ‘God, whatever appointments you have for me today, help me get to them.”

One email described the time Morris sat in a chow hall in Iraq and felt a nudge to speak to a soldier sitting at the other end of the table. The soldier happened to be from southern Minnesota near a church that he pastored.

“God brought me all the way across the world to let you know that, in the middle of this desert, He’s thinking of you,” Williams said, retelling one of the emails Morris sent her. “It was incredible to read stories like that, to have him share those with me grew my faith a lot.”

The National Guard hired Morris in 2005 to develop Beyond the Yellow Ribbon, a transition program for Minnesota soldiers reentering society.

“The key to that successful transition is that soldiers have to find a new mission and a new purpose,” Morris said. “I looked at what segments of society need to come alongside these soldiers and their families, and Bethel University was one of the first places I came.”

Morris knew that Bethel President Jay Barnes served in the Army and would be willing to help integrate Beyond the Yellow Ribbon in schools of all levels. Barnes reached out to clergy and educators, making Bethel one of the first private colleges in the country to join the program.

Former Senator Mark Dayton noticed what they were doing, so former Governor Tim Pawlenty put together national legislation to expand the program.

“It got way big way fast,” Morris said. “I never envisioned that. It was a little piece in something big that God wanted to do.”

Following that project, Morris continued to serve in various chaplaincy roles, including active duty in Iraq, the head of hundreds of National Guard Chaplains in Washington D.C., an instillation chaplain in Oklahoma and a final position at the Pentagon.

“I couldn’t imagine retiring,” Morris said. “I’m not sure what that means. I really believe that we’re in ministry wherever we’re at for our whole lives.”

0 comments on “A never-ending ministry”