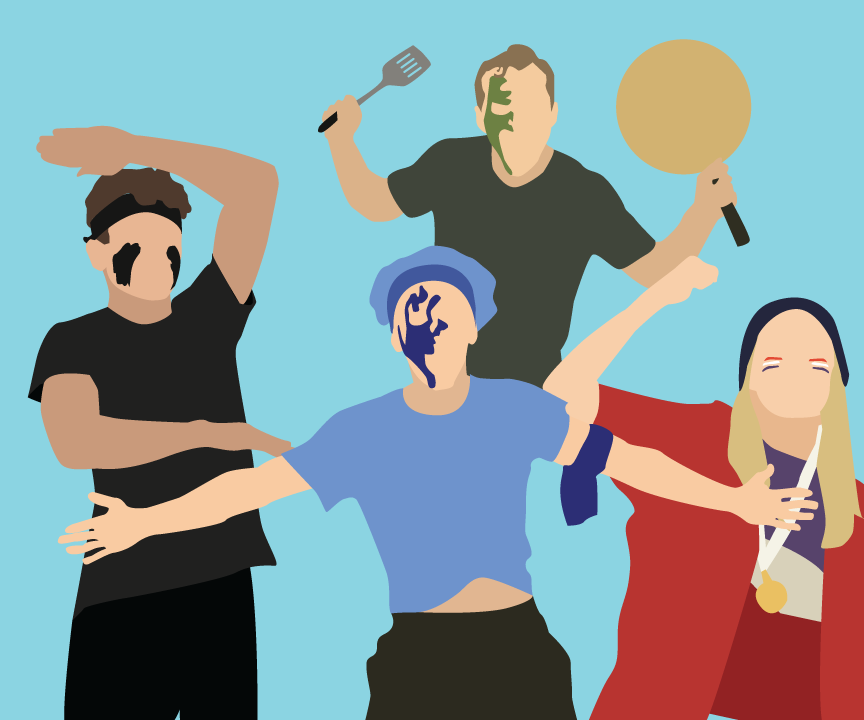 Clarion Editors give their first impressions and honest opinions about Cheer Night.

Josh Towner (Editor in Chief): A lot of screaming, a lot of sweating and a largely unenthusiastic lion mascot. Wait, was that Moodle advertisement part of Lissner’s cheer?

Molly Korzenowski (News Editor): The temperature in the building surpassed the tropical air outside. Everyone appeared to be hungry, just not for the rotisserie chicken.

Which hall’s cheer was the best?

Josh: Lissner put together the most solid overall performance, but Bodien gave us a kiss from the greatest power couple Bethel has ever seen. Nothing else compares to the magnitude of that kiss. I don’t even remember anything else from Bodien’s cheer, I just know that was the most important and momentous thing that happened tonight.

Molly: Bodien stole my heart the moment they opened with the Sound of Music. The whole cheer was well organized and I could tell care was put into the enunciation of their words. And of course, they pulled off the biggest feat of the night: a kiss by MVP Jay Barnes and his wife.

Zach: Bodien, you got Jay Barnes to kiss his wife in the middle of a horde of freshman, so props. But I have to give it to Lissner. Keegan Feller made me swoon and the references were original but still Bethel, especially the Enneagram segment. And it would have been a 10 out of 10 if only half the people dropped when Thanos snapped.

Which hall’s cheer was the worst?

Josh: Edgren had 2-3 times as many people as Off Campus, remembered all their lyrics and somehow managed to be worse. I couldn’t understand a word they said after the Spongebob opening. It sounded like they practiced with the intention of sounding like a Sodexo cart rolling across the floor of the BC.

Molly: Sorry commuters. You tried to convince everyone you were the best with your candle privileges, but I didn’t buy it based on your frazzled performance.

Zach: I give the commuters a D for preparation, a C- for delivery and an A+ for patriotism.

What was your favorite moment?

Josh: Keegan Feller broke out the saxophone for Lissner’s opener and our lives were changed forever. The fusion between man and brass was so perfect and pure that it produced a noise so divine that for a split second I understood teleological pneumatology.

Molly: There was this beautiful moment when everyone in Heritage raised their arms and two rolls of red streamers drifted across the crowd. That’s some soul-touching stuff right there.

Zach: More of an internal moment, but it was when I realized that the least fortunate people on campus are those who decided not to come. They really missed out. I mean, how else are they going to hear about Moodle Plus?

What was your favorite lyric?

Josh: “You said you had chips and pickles? YOU LIED!” — Heritage

Molly: Every time the words “rotisserie chicken” reverberated through the gym.

Zach: “Moodle Plus has all the features needed for a satisfactory homework experience.” — Loudspeaker guy

Which hall had the best pregame performance?

Josh: Jesus riding a donkey into Jerusalem. Mohammed Ali out of the tunnel. Lebron throwing up the chalk. North Village walking to the RC gym. All these events have one thing in common: an incredible entrance. North showed up banging pots and pans and visibly scared the already assembled competition. No other pregame performance came close to touching this entrance.

Molly: North was on fire. Literally, the room got visibly hotter when they crammed into the narrow hallway. I saw a girl banging on a hydro flask water bottle among the pots and pans. If that isn’t true Bethel spirit I don’t know what is.

Zach: Lissner packed 50 students into a hallway seven feet wide and produced a noise louder than my dad sneezing in a movie theater. That takes work.

Who was in the mascot suit?

Josh: It has to be BTS professor Erik Leafblad, right?

Molly: I have my money on Jay Barnes himself. There was definitely enough time for a costume change in there.

Zach: A representative from Moodle. They had to pay for that ad somehow.

This is an opinion piece and does not necessarily reflect the views of The Clarion, its staff or the institution. If you would like to submit a response or an opinion piece of your own, please contact Editor in Chief Josh Towner at josh-towner@bethel.edu.