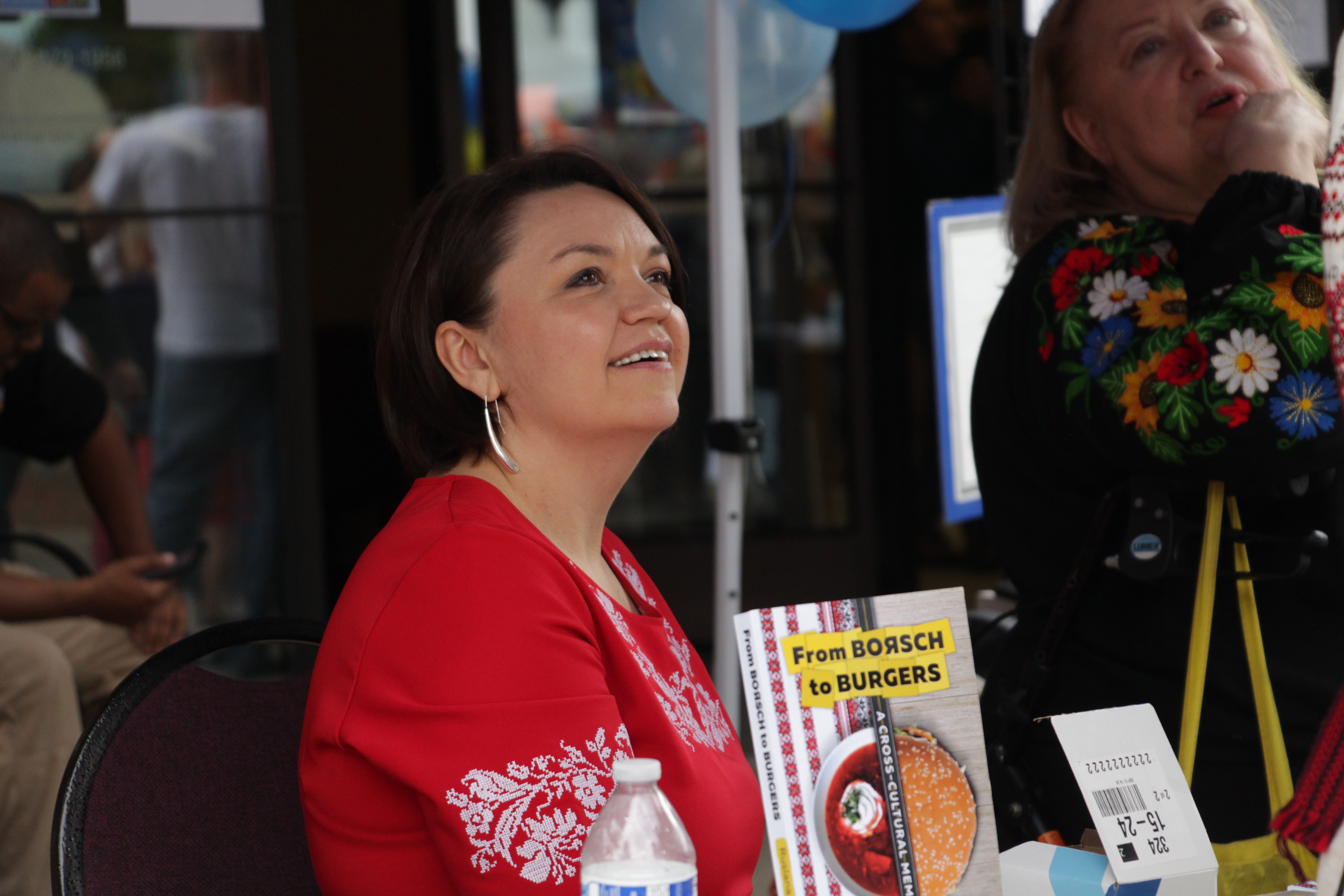 In her new memoir, Bethel University linguistics professor, Ruslana Westerlund, chronicles her cross-cultural journey from a village in Ukraine to the United States.

Ruslana Westerlund’s dolls spoke Russian. And they lived in an apartment in a big city and wore pretty dresses and ribbons in their shiny synthetic hair.

Westerlund grew up in a pink house on the potato fields and dirt roads of a Soviet Union village of just 2,500 in Ukraine. She plucked stubborn weeds from the vegetable gardens and washed her clothes on the river banks when the crank on the wringer machine broke.

And she spoke Ukrainian.

The Soviet Union infused the land, language and culture of Ukraine with their ideology and Russian identity back in 1922. Soon, speaking Ukraine’s official language became second class, the tongue of the uneducated.

“In 23 years of my life, I grew up feeling that my language wasn’t cool enough,” Westerlund said. “So I would go to the city and speak Russian because it was more prestigious.”

Always curious about English, Westerlund studied the language in college, becoming an interpreter for missionaries in the Minnesota Baptist Conference in 1994. Her hope was to become an English teacher in Ukraine, making little and going without work for three months each summer.

She never peered out the window and daydreamed of what life would be like in the United States. Those kinds of fantasies were quickly swallowed by 10,000 potato mounds, stubborn weeds and calloused hands. But if fairy godmothers exist, then Caryl Bloem was hers.

Bloem was an elementary teacher from Coon Rapids, Minnesota who traveled to Ukraine with a team of missionaries in 1994 to reach children of the underground church. She knew Ukrainians would beg her to take them to the United States – the Soviet Union had recently collapsed and Ukraine’s economy was prepared to follow. She had been told to give a firm “no” to anyone who asked. They wouldn’t understand “maybe.”

So when Westerlund’s mom pleaded that Bloem take her daughter to America, that’s exactly what she said.

“I told Ruslana I didn’t think there was much chance of any kind, but she didn’t take it that way,” Bloem said. “She knew she was coming right away.”

Sure enough, a wad of paperwork, a letter from the senator and more bribes than any American would care to share led Westerlund on a journey across the Atlantic.

Now a linguistics professor at Bethel University and a researcher at the University of Wisconsin-Madison, Westerlund says she strives to teach students how language can both empower people and discriminate against them. And in her recently published memoir titled “From Borsch to Burgers,” Westerlund chronicles her journey from Ukraine to America while navigating through a sea of new foods, customs and language.

Westerlund remembers when Bloem picked her up at O’Hare Airport in Chicago at just 22. She gaped at the strange buildings whizzing past her car window.

“What are these castles and who do they belong to?” she asked her host mom in awe.

By the time they arrived at Bloem’s aunt’s house in Rockford, Illinois for dinner, Westerlund’s head was just about falling into her plate. When Bloem’s aunt excused her from the table, she was stricken.

“What wrong did I do?” she asked Bloem.

“Oh, you did nothing,” Bloem said. “She only meant that you could be excused from the table and go to bed.”

It would take 24 years of living in the United States before Westerlund would wrap her head around the nuances of what people said and what they meant. She began making a chart to keep track of them all. It was easier that way.

“Let’s get coffee soon,” for example, almost never leads to real coffee. Got it.

“How are you doing?” is a greeting, not a genuine question that requires a real answer. Understood.

And “That’s interesting” is basically code for “I hate it.”

“In the Midwest, you have to be indirect, and you have to say white lies in order to be polite,” Westerlund said. “In Ukraine, that’s considered very rude and not being very honest, so a lot of politeness is driven by different values.”

Westerlund admits she struggled with this “Minnesota Ice,” as some anthropologists call it. Yet she also quickly notes the people she met who donated money to her childhood friend dying of cancer or helped replace the windows in her dad’s church building “with no strings attached.”

But language wasn’t the only thing to get used to. Bloem recalls Westerlund dressing up for her dentist appointment in a hat, high heels, nylons and a dress. That’s just how they did it in Ukraine. And the grocery store was as big as her entire school back home, or maybe even bigger. She made sure to take photos to send back home to her parents.

Everything in the Bloem’s bathroom matched. There was a big towel and a small towel and a bath mat. They all matched. And there was a sand dollar framed on the wall. The lawns were manicured and people smiled a lot. And there were so many appliances in the house. A microwave, a dishwasher, a washing machine, a dryer…

“When my mom came to visit me, she said, ‘You don’t do any work here; all you do is walk around the house and push buttons,’” Westerlund said, “and she’s actually right.”

Westerlund often describes herself as a spork. Not a fork, but not quite a spoon. Not fully Ukrainian, yet not fully American, either. When she returns to her childhood home in Ukraine, she feels like a visitor. But when she orders her coffee from Caribou, the barista says, “You have a weird name.” Maybe next time she’ll go by Natasha. Or Jessica.

She longed to humanize the immigrant experience, giving a voice to people who, like her, have experienced the confusion of 31 different ice cream flavors in the supermarket and buttons that make the house warm.

So when her husband Rob said, “Ru, you should write a memoir” one night, she jumped out of bed and wrote an outline. It was finished in five months.

“The memoir chronicles what it means to be a hyphenated American,” Westerlund said. “I was trying to place myself in one box, and I realized I can’t be in one box or the other box. I have to be in both.”

As a young child, Westerlund dreamed of speaking in different languages. Now she has received a doctorate degree, writing her dissertation in her fourth language.

Last February, Westerlund gave a keynote presentation at a Kennesaw State University conference on how language education contributes to unequal opportunities for English language learners in K-12 schools in the U.S. She described to her students how linguistics helps one understand not only how language works, but how society marginalizes people from different racial and linguistic backgrounds, too.

Westerlund doesn’t play with her dolls anymore, but she sympathizes with her six-year-old self. She understands her urge to switch to a more prestigious dialect in the name of being “cool.” She also knows the calluses and sunburns and sweat made her who she is.

“What keeps my identity pendulum from swinging is when I remember that my identity first and foremost is grounded and anchored in Christ,” Westerlund said. “That’s when my pendulum rests and my identity is stable.”

0 comments on “A hyphenated identity”