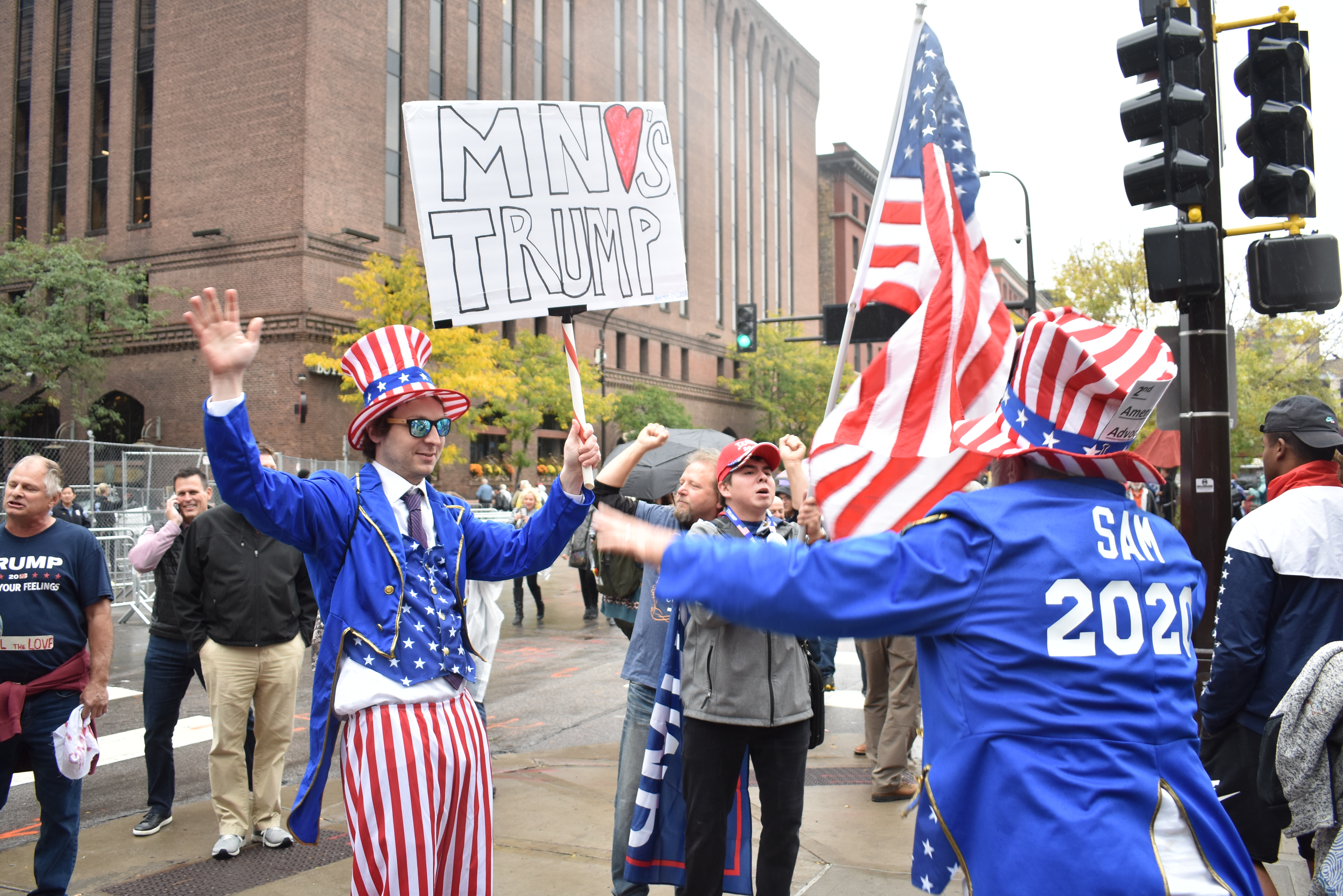 President Donald Trump speaks to thousands at the Target Center.

A man dressed in red and white striped pants, a star-spangled vest and an Uncle Sam top hat held a sign reading “MN loves Trump” on 1st Street across from the First Avenue venue. He had sunglasses over his eyes, despite the clouded sky.

A bearded man wore an almost identical outfit. He stood beside a giant banner with “IMPEACH” in bold white lettering. He spoke muffled messages through a portable microphone as rain drizzled on the crowd.

President Donald Trump rallied in Minneapolis at the Target Center on Thursday, October 10. Long before the president arrived at the Minneapolis-St. Paul Airport at 6:12 p.m., supporters and protesters filled the streets and skyways.

One man set up his folding chair in the skyway 36 hours before the rally, the first supporter to arrive. By noon on Thursday, the line wound through the Target Center and into the streets.

At the same time, protesters began gathering at the intersection of 1st Avenue and 7th Street for the planned march at 5:30 p.m. A person in a baby Trump costume posed for a photo. A long cardboard sign rested against a rock wall and read “Donald is a quack” in spray painted letters.

Inside the Target Center, Trump entered to the song “God Bless the U.S.A.” by Lee Greenwood about 50 minutes late.

Thousands of protesters marched in the streets with their hand-crafted signs held high.

“For the first time in a very long time we are putting America first,” Trump said.

The crowd chanted U.S.A. in unison. Trump said he was sure he would win Minnesota in the upcoming election, a state he lost by narrow margins in 2016.

Besides a few rows of chairs in the back, the entire arena was full, including a couple hundred on the floor. Trump claimed 20,000 people were in attendance, but the number has yet to be verified. The Target Center can hold 19,356, not including the floor.

Amidst the MAGA hats and Trump banners, a single protester shouted out during a pause in the president’s speech. Supporters booed and pointed.

“Go home to mommy,” Trump said as security escorted the interrupter out. “Mommy says, ‘I saw you on television tonight, I love Trump. Don’t you ever do that again.’”

Trump welcomed up Lt. Bob Kroll, head of the Minneapolis Police Union, to the stage to share an embrace along with 12 other union members. Kroll and the Police Union created “Cops for Trump” t-shirts after the police department prohibited them from wearing uniforms to support political candidates at events.

“How can you thank this guy for everything he’s done for law enforcement,” Kroll said, “Wonderful president.”

After an hour and 45 minutes, Trump exited the stage leaving an enthusiastic crowd in his dust.

Outside, officers lined the streets. Some rode on horseback, others sat on motorcycles and more stood in lines carrying wooden batons.

Protesters gathered Trump hats and burned them on the street. Others chanted, wearing bandanas and holding signs.

When Trump supporters attempted to leave the parking lot, the crowds surged forward to block the entrance. The crowd received a dose of pepper spray in order to allow cars through.

At 11 p.m., the streets began to quiet down. A charred pile of cloth and a few tattered signs were all that remained.

0 comments on “Trump rally draws crowds from both sides”