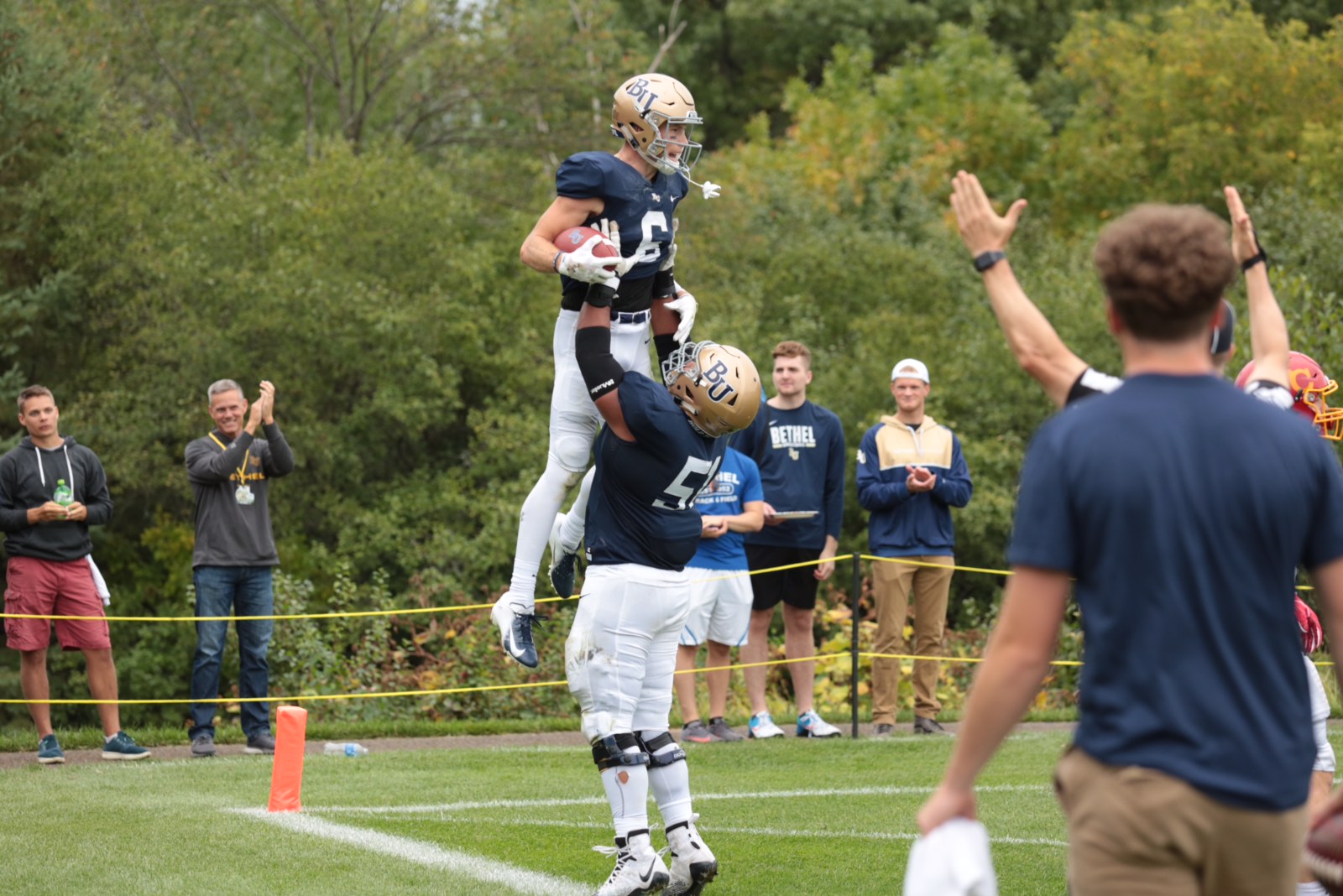 Senior wide receiver Drew Larsen is an all-conference pass-catcher. Ask him four years ago if that’s what he wanted to be and the answer is not what you’d expect.

He was fast. That’s what made him popular, cool, the athlete everyone wanted to hang out with or even just be in the presence of. He was faster than all the other fifth-grade kids in White Bear Lake. Drew Larsen had it made, all thanks to a six-minute, five-second mile.

“It probably wasn’t even a real mile,” Larsen explained. “You ran around a field three times and then sprinted off another direction for the last bit.”

Nowadays, he only needs to sprint that one direction to succeed athletically, playing wide receiver as a senior on the Bethel University football team. He secured seven touchdown receptions in the first three games of the season, giving defensive secondaries fits with his tight route running and soft hands in traffic. You’d think he’s been doing this for his whole life. You thought wrong.

Larsen didn’t step on a varsity football field his entire life until two years ago.

He played all types of sports growing up, and combined with his newfound athleticism after that mile run in fifth grade, he had made up his mind on a career. “Whenever someone asked me what I wanted to be when I grew up, I always responded ‘professional athlete,’” Larsen said.

He decided after freshman year that football wasn’t the fall sport he wanted to focus on; it was too risky for his dream of playing college basketball. So he traded one pair of cleats for another and played soccer as a sophomore.

“I loved soccer too. Any place I could show my ability to run and compete, I loved it,” he said.

But something was missing. A camaraderie, an excitement, a community. Many would attribute those characteristics to a high school football team.

Larsen was slotted to be the starting wide receiver as a junior, standing every inch of 5-foot-6 with that legendary speed to get downfield.

High school teams play seven-on-seven passing leagues in the summer to build chemistry and continuity into training camp. Nothing out of the ordinary for the White Bear Lake High School squad. Larsen joined up and promptly broke his left tibia that summer, which held him out of commission for the entirety of his junior season.

“Honestly, it wasn’t this huge disappointment for me yet, because I was still so focused on basketball,” he said. “I would just come back next year healthy.”

Larsen came back taller — he shot up from 5-foot-6 to 6-foot-1 the summer before his senior year. Healthier? Right up until he got sidelined again, before he could even put his receiver gloves on.

Lifting at 7 a.m. Basketball open gym at 11 a.m. Two-a-day football practice in the afternoon. The straw that broke the camel’s back? Basketball summer league games at night.

Larsen snatched the ball from his opponent and saw wide open hardwood. Nobody could catch him, even while he was dribbling. A breakaway layup was guaranteed. He planted his left leg to elevate for the shot and his left leg popped.

The overuse on Larsen’s body — nonstop workouts, little rest — built up over time and resulted in one of the rarest leg injuries ever: tibia tuberosity avulsion.

There have only been around 100 cases of tibia tuberosity avulsion in the United States. All of them involve males under the age of 21. The chance of any one person suffering the injury is less than one percent.

Larsen was devastated. “The first thing that came to mind was ‘why me?’” he remembered. “My dreams were getting taken away.”

Football came and went, with Larsen in a black, orange and white 85 jersey every Friday night. Just in a boot and on crutches instead of cleats and pads.

What was his identity now? He never got the chance to beat a cornerback on a post route in a game or start in the season opener of his senior basketball campaign.

Larsen forgot about football. He didn’t need it, not when his entire experience was surgery and feeling left out.

Bethel basketball seemed like the next step in moving on. He played junior varsity as a freshman. The dream of being a college athlete still held.

Then his neighbor, Greg Peterson, Bethel football’s offensive coordinator, asked him one day if he was interested in trying again. After all, he could still run fast despite the screw in his left leg. The fifth-grader in Larsen decided to give it a go, and he ended up on the practice squad for his first year and it humbled him.

“All I did every week was give the first team offense a good look,” he explained. “Weirdly enough, I loved not being the best guy out there. Something in my mindset changed and I loved serving because of the guys I was around.”

Injuries might have intercepted the camaraderie and community Larsen was looking for back in high school, but he’s been healthy the last three years and has seen his role increase along with his faith. He’s second in the MIAC in touchdown catches as of this writing, and won’t deny he knows what the league records are. “Those numbers, I see them,” he said. “But I know I’m not going to be a pro or anything like that. I just want to carry myself the right way and influence others positively with my journey.”

0 comments on “No ordinary route”