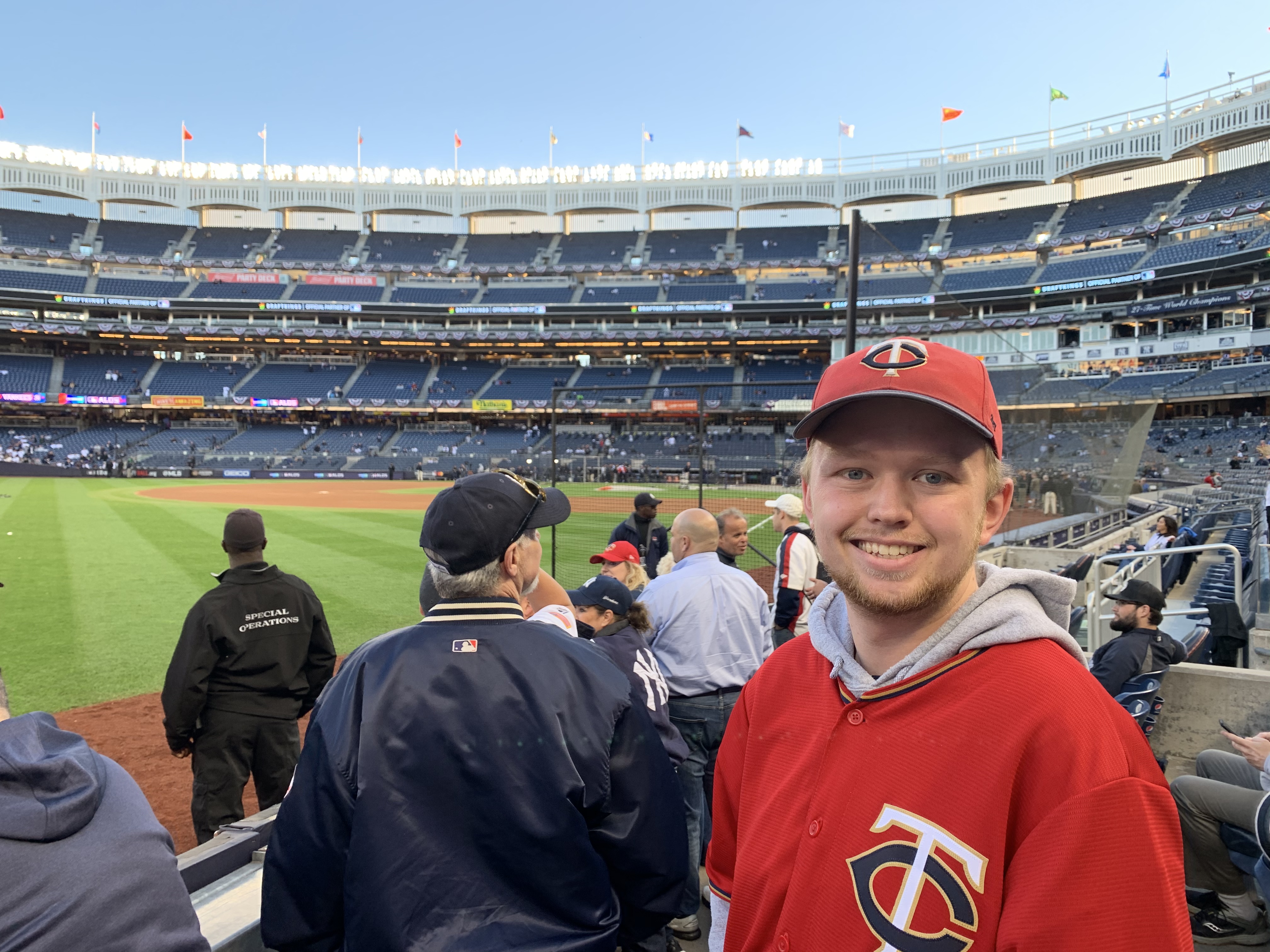 If there is one thing I have learned in New York City, it’s that Minnesota will always be my home.

No disrespect to New Yorkers, but the vibe in the Big Apple is different. Buildings reach taller. Locals speak firmer. And crowds just sound louder. To a Plymouth, Minn. native, this felt extraterrestrial.

I decided to study abroad in New York City at The King’s College to pursue a career in journalism. That required an entire semester away from everything I knew and loved: family, friends and, at that time of the year, the streaking Minnesota Twins.

As soon as I got to New York I yearned for something to be homey. During my first week I made my cousin’s penne pasta dish with sausage and cream sauce, something that we often make at my house. The Italian zing still existed but, besides that, it tasted dull.

Conversations with my buddies back home were fun, talking mostly about how my fantasy football team will dominate the league, but also left me feeling empty afterward.

And when I watched a home Twins game through my laptop sitting on a couch in my 13th-floor apartment, seeing the backdrop of “Target Field” on the limestone behind home plate sparked a feeling of loneliness.

Part of that emotion was because the Twins were pretty good this season. They were on pace to hit more home runs than any team in baseball history while leading their division almost all year.

On Sept. 28, the matchup had been set: Yankees would host the Twins for Game 1 of the best-of-five series on Oct. 4.

Two days later, my roommate, Joe Hiti, and I, disregarding the price tag of the tickets, decided to go and see our hometown team play the rival Yankees.

Walking down Fulton Street on Oct. 4, I felt as if the eyes of every New Yorker were on me.

To be fair, I wasn’t hard to miss.

I wore a red “TC” cap, a red “TC” jersey with a gray sweatshirt underneath, black jeans and bright red Nike shoes. I felt like the protagonist in a real-life “Where’s Waldo?”.

Nevertheless, at 4:30 p.m., my roommate and I walked the streets of downtown Brooklyn, full of cars honking at each other, empty pizza boxes sitting on the curb and Yankee fans trash-talking us, to take the 4 train from Nevins station up to 161st street in the Bronx, or as I would later come to realize, my version of the Death Star.

Being from Minnesota, I have rarely felt like an enemy. No one is going out of their way to victimize a Minnesota sports fan these days. The culture of “Minnesota Nice” is to welcome everyone and be hospitable to a fault.

Tell that to New Yorkers.

Now, I will admit, there were several fans I interacted with before the game, while watching the Twins take batting practice, that were genuinely interested in having a civil conversation, with many cordial handshakes and mutually distributed “good lucks.”

But in section 432b, the only thing similar between the nose-bleed Yankee fans I sat by and the pregame Yankee fans was their use of the English language.

Even walking to our seats, we experienced the Yankee Stadium ritual of verbal abuse to the opposing team.

“F—the Twins,” one Yankee fan from the right-field fan section called the “Bleacher Creatures” shouted at me as I walked toward Monuments Park, a shrine to legendary Yankee players underneath center field.

Either way, neither scenario gave me an option to avoid abuse and public humiliation.

And as the game began, option number one looked like the most likely.

After leadoff hitter Mitch Garver struck out, causing the sea of white jerseys in the crowd to sound like a NASA rocket taking off from its launchpad, Twins shortstop Jorge Polanco hit a line-drive home run to left field that quickly evaporated any sound in the stadium. My roommate and I were the only ones standing and cheering in the section.

Little did we know that, as we stood there, we were sitting ducks for an onslaught of verbal slander.

“Aw, look at that, they have hope,” one Yankee fan sitting to my left mockingly said.

During any high-stress sporting event, I typically need something to munch on to relieve some of the anxiety that naturally boils in me.

So to cope, we split a chicken tenders bucket with fries. I vowed to make sure my portion could last me at least a couple of innings, maybe halfway through the game.

The tenders were gone by the second inning.

But I still felt hopeful. Twins designated hitter Nelson Cruz hit a home run in the third inning to right field which silenced the crowd even more. 2-0 Twins.

Option one is getting even more likely.

The Yankees scored three in the bottom of the third and the whole momentum of the night changed.

The fans to the left of me now shifted their attitude from mocking to yelling.

One fan in particular became enamored with annoying every cell in my body.

He had black hair with a black beard and wore a white-pinstripe, number two Derek Jeter jersey. And of course, feeding the stereotype, he held a cup of beer, which refilled several times during the game.

Every time the Yankees catcher, Gary Sanchez, came to bat, I would hear a ten-second “GAAAAARY” screamed in my left ear. If that wasn’t enough, it didn’t stop when Sanchez was done hitting. Shortstop Didi Gregorius’ at-bats doubled the amount of ear trauma I endured during the night. And, at some breaks between at-bats, he would scream “Let’s go Yankees” into the already battered left ear.

He even went as far as to kick the backs of our chairs during breaks in the action.

The Twins answered back at times during the middle innings, but if they would score one, the Yankees would score two or three. During the seventh inning, Yankees first baseman DJ LeMahieu hit a bases-clearing double to break the game open 10-4.

My “favorite” fan, who had now moved behind me, thought it would be a fun idea to throw some beer on the two Twins fans in front of him.

Beer stains about the size of a quarter dotted my red cap and the sleeves of my gray sweatshirt.

They were my battle scars.

The same 4 train took us back to Fulton street in Manhattan after the game, where we took our connecting train to Brooklyn.

When we got back to our apartment at 12:45 a.m., the stains were still there, reminding me of a different reality than the comforts of living in Minnesota.

No beer stains. No fan abuse. Just phrases like “way to go” or “we’ll get ‘em next time.”

Turns out, the Twins lost the next two games and got swept. Again.

“Next time” will have to be next year at the earliest.

If I’m honest, seeing my team in my interim home made me miss Minnesota even more.

In one sense, the Twins and I experienced a shared event. We were both abused and overpowered by New Yorkers, but in different ways. And seeing them lose made my connection to home even stronger.

Sitting in upper left field at Yankee Stadium, with those fans and in that environment, I missed the right field grandstand at Target Field.

I missed the high-fives with other Twins fans I had only just met, but felt a connection with.

I missed Tony O’s Cuban Sandwich with Old Dutch potato chips and extra mustard seeping through the wrapping. Or the twist ice cream waffle cone with a napkin wrapped around the bottom of the cone because I waited too long to start licking since I followed the game so closely.

Yes, I still emptied my pockets of the same items I do at Target Field: phone, wallet, keys and pen (for the scorecard). Yes, the seventh-inning stretch had the same lyrics (just root, root, rooting for the Yankees). And yes, they still played the same, age-old game of baseball.

But in that moment it wasn’t home.

I’m already preparing for our “next time.”

I want those same Yankees next year in the playoffs. I am not afraid of any “Yankee curse” as some Twins fans are.

I want to see them in my city. I want to beat them at my home. My true home.

0 comments on “Finding my true home”