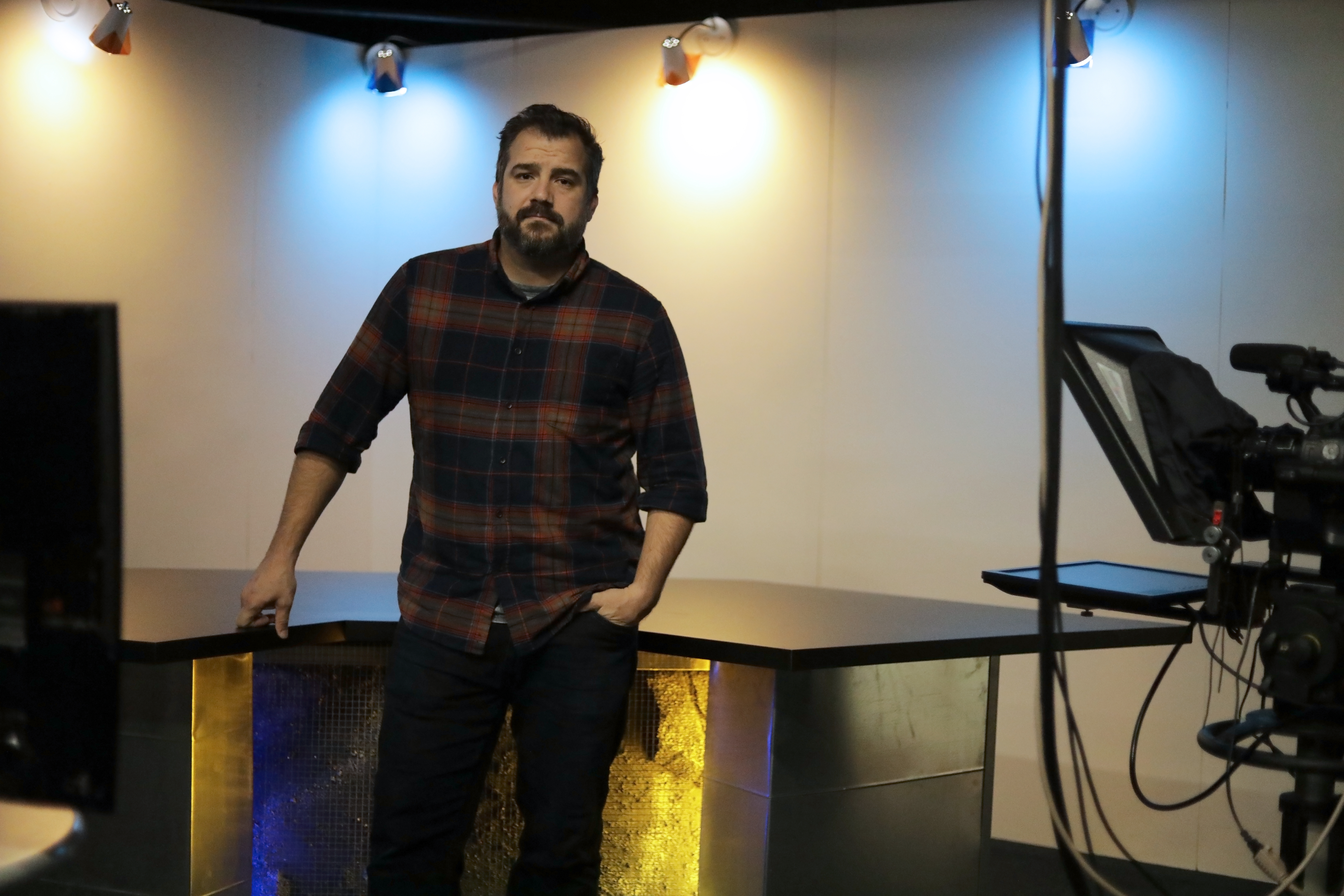 Media production professor Nick Swedlund believes in the future of Bethel film even though he may not be a part of it.

Nick Swedlund hustled into Can Can Wonderpark in St. Louis Park at 9 a.m. with his bag slung over his shoulder and his phone in his left hand. Rain drizzled from a gray sky over the home base of the 2019 Twin Cities Film Festival. The lights outside mixed with fog and created a haze.

As education director of the entire film festival, Swedlund, a professor of media production at Bethel University, had been preparing for the festival for months.

Each week In his Bethel classroom, he prepares for digital filmmaking classes. This year, he’s preparing to leave.

Bethel administration announced cuts to the independent filmmaking and media production majors Sept. 12, 2018 and decided to only renew Swedlund’s teaching contract until the end of the Spring 2020 semester.

Although the media production major was reinstated, Swedlund thought the festival would be an opportunity for both him and his students to explore other opportunities in the world of film.

At the festival, he led workshops and informational panels with hundreds of film professionals and taught a three-day workshop for 20 Twin Cities college students, three of whom were from Bethel.

“What Nick does differently than my other professors is he teaches what you need to know and then lets you learn in a hands-on group environment,” Cox said.

Thankfully, for Cox, Swedlund and other professors appealed to the Bethel administration about the media production cuts. For the independent filmmaking major, they were not as lucky.

Later that morning, Swedlund and his film festival students made their way into the Wonderpark. Bethel sophomore Benjamin Martin sat down in the far left corner with his high school friend Paul Gennrich, who he had been shooting films with for five years.

Martin heard about the festival his first day of Media Production I with Swedlund and knew it would be a great opportunity for him and Gennrich.

A handful of colleges attended the festival to talk about their programs. Swedlund invited Bethel to have a free table at the event, since he was leading it, but Bethel declined the offer without giving Swedlund a reason.

“[Film] is how the world is taking in stories,” Metropolitan State Screenwriting Coordinator Jeremy Bandow said. “So, to have programs [that] teach visual [storytelling] is important.”

Swedlund and his Media Production I students walked into the Bethel University television studio on Oct. 29 at 9:25 a.m. with their eyes half-shut. Swedlund asked two students to check out two cameras worth about $1,000 each and a singular tripod from the library. Swedlund uncased an Impact Light Kit worth $350 and assembled it in two minutes. Media Production II requires even more equipment, including television cameras worth $55,000 each.

But according to Swedlund, Bethel’s equipment is outdated.

“Media production is no longer an expensive program,” Swedlund said. “Ninety-five percent of this gear they’ve had for twenty years.”

Some of the equipment is so old that it’s classified as unsafe. The new light kits have LED lights, but the $10,000 ceiling lights are made with non-LED lights. When turned on for long periods of time, they heat up and become a fire hazard. There are about 15 of these ceiling lights in the television room alone, and replacing them all could cost upwards of $150,000.

Swedlund thinks the cost of equipment is worth it.

“Our culture is a visual culture; that’s a fact,” Swedlund said. “Film is the dominant culture-creating medium in this day and age. It’s disheartening to see a school with so much potential not step up and be a leader in the media landscape.”

Recognizing that film is a $41 billion industry, other universities in the Twin Cities have already taken steps to prepare students for their careers. Majors like film production, animation, digital video, graphic communication, audio production and film studies are just a few of the options offered at other colleges in the area like Augsburg University and Metropolitan State University.

“My goal is to make Bethel the preferred school of choice for media production.” Swedlund said. “As long as I’m at Bethel, I’m going to work on doing that.”

Swedlund admitted he doesn’t know the status of Bethel’s finances, but he believes that Bethel has enough donors to ensure its safety. However, he’s not sure about his own.

Tensions are high as rumors of more cuts in April have begun to surface. No matter where he lands after the spring of 2020, Swedlund plans to continue working in the film industry.

“It’s important that we set an example for how we treat each other in times of stress, no matter the outcome,” Swedlund said.

0 comments on “Fighting for film”