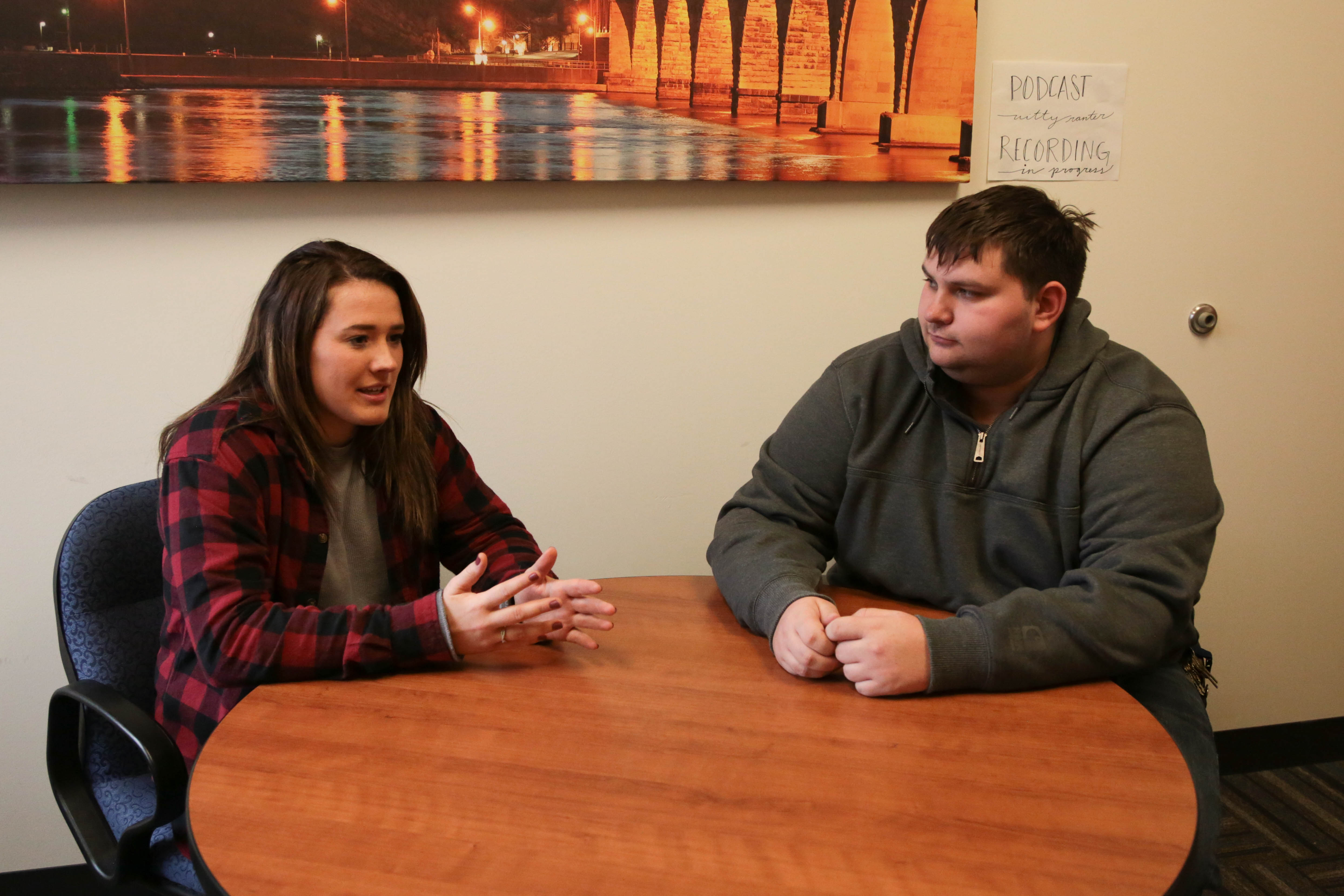 Republican club gains new name under two leaders who want to focus on political ideas rather than political parties.

Turning Point USA met for the first time in HC 256, deep in the heart of the nursing department where students walk past medical dummies and hospital beds. Club leaders John Chouinard and Faith Miller set up ice cream buckets on a table complete with sprinkles, chocolate syrup and M&Ms to welcome new members Oct. 2. Freshman biokinetics major Elle Krellwitz walked in and took a seat.

The first meeting of the year started small, but Chouinard and Miller dove deep into topics such as sex trafficking, voting, marijuana use, the wall, LGBTQ and methods of respectful conversation.

Chouinard and Miller want these tough topics to be discussed more on campus. Miller said students struggle with being passive aggressive because “they don’t want to offend anyone, so they don’t say where they stand.”

“I want to help in any way I can,” Krellwitz said as she filled out a voter registration sheet. She said she wants to discuss issues such as abortion, gender and the border wall.

“It’s important to give students facts so they can decide for themselves,” Miller said.

Within the last month, communication studies professor Andrew Gess agreed to be the club’s adviser. On the other side, College Democrats is no longer a club due to low attendance.

“They sadly didn’t have enough participants to be an active club,” BSG Director of Clubs and Organizations Kaylee Schmidt said.

Although the nonprofit provides promotional materials, finances conference trips and facilitates on-campus events, the club doesn’t receive money from the organization, Chouinard said. Turning Point representative and Bethel alum Jeff Flicker supports students by setting up tables in the Brushaber Commons and organizing events such as “Sex Trafficking and the Wall” with Jaco Booyens, an advocate for the fight against sex trafficking.

“Even if we can’t change their minds, at least we’re informing them,” Chouinard said.

Turning Point USA hosted their first campus event in the Underground Oct. 16. Standing between Turning Point USA banners, Jaco Booyens talked to Bethel students about the reality of sex trafficking in the U.S.

Nearly 60 people filled the Underground on a Wednesday night. The crowd consisted of Bethel students, Child Protection League members and students from other universities.

“The most valuable resource on the planet is people,” Booyens said and believes humanity’s sole purpose is to help one another.

As a filmmaker and activist, Booyens travels throughout the country, speaking at schools, universities and offices to bring awareness of several issues. At Bethel, he focused on the sex trafficking of children and a Christian’s role in ending it. Booyens founded Share Together, a “nonprofit organization with a heart to serve, help and reach everyone in need.”

Booyens journey as an advocate began when his own sister was trafficked. He remembers walking down streets with his brother looking for her. After six years, she was found and Booyens began advocating for those still being trafficked.

His mission includes producing a film about a sex trafficking survivor, giving talks all over the country to raise awareness and training over 100 FBI agents how to look for signs of trafficking.

“I don’t discriminate,” Booyens said. “I will save every child.”

Booyens finished his talk by insisting he would stay all night in the hallway or outside, answering any questions the audience had or being there if they just needed to talk.

Miller was excited about Booyens’ visit because she says sex trafficking isn’t as controversial as other topics the club addresses.

“It’s a good way to lean in and get involvement because people were like, ‘Oh, that’s an interesting topic,’” Miller said. “As a college student and a woman, that’s a good thing to talk about.”

0 comments on “From College Republicans to Turning Point USA”