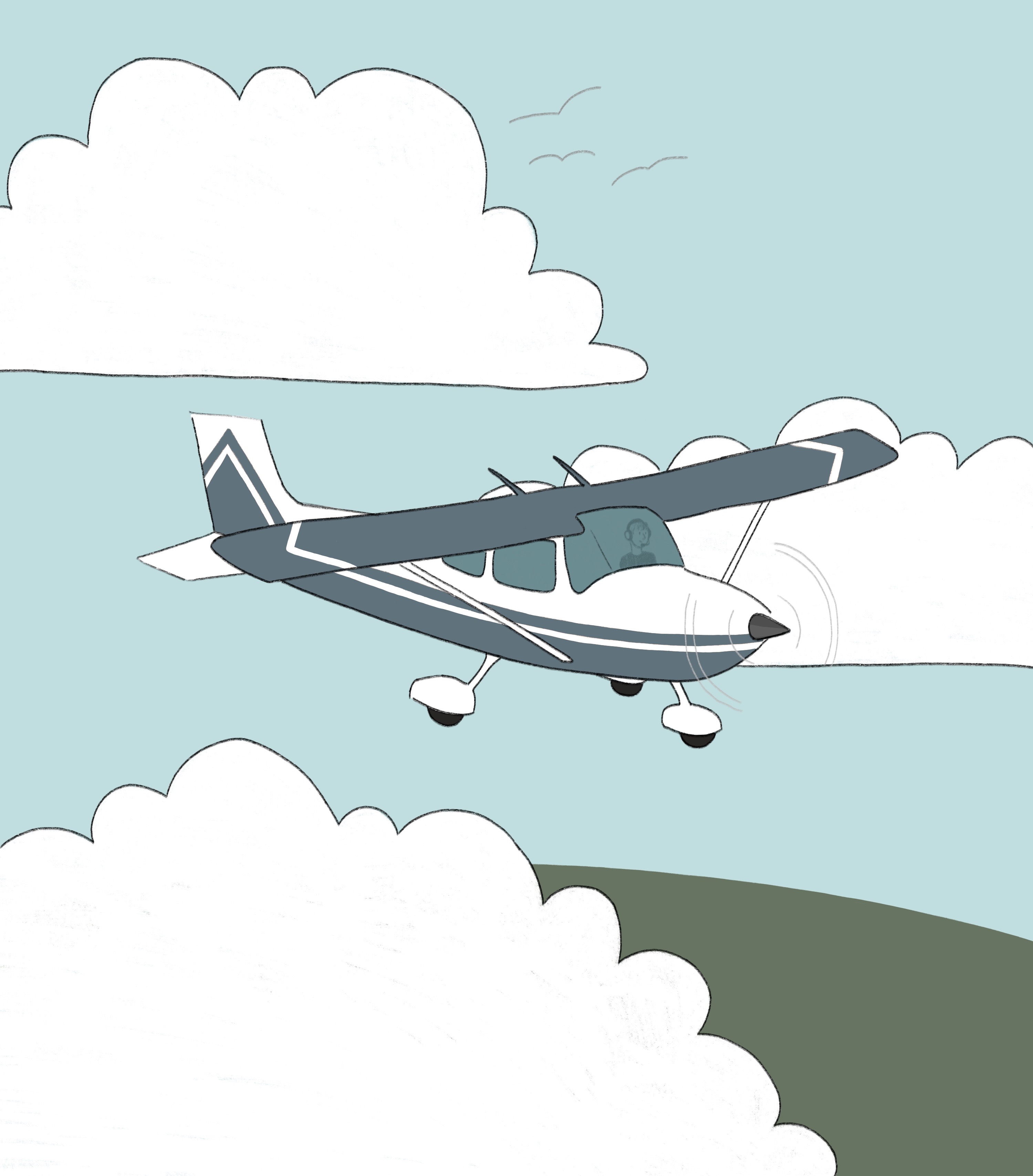 Sitting at the end of runway 21 at Branson West Airport, a Cessna 172 Skyhawk kicked up dust and exhaust while completing the final runup checklist before takeoff. In the airplane sat a nervous student pilot: me. I had been training for this moment for more than a year, with over one hundred hours of class instruction and numerous flights with my instructor under my belt. I should have felt confident, but I didn’t. Instead, I kept thinking about how I was too young to die. However, I also wanted to prove to myself that with dedication and hard work, I could do something that I would otherwise never have thought possible. So, I closed my eyes and took a deep breath. In this moment it was just me, the airplane and the open sky.

I opened my eyes. It was time to complete my pre-takeoff checklist. Doors and windows closed? Check. I was suddenly aware of the heat in the cockpit, and sweat began to bead on my forehead.

Seatbelt? Locked, although maybe a little tight. Flight controls? Free and correct. Mixture? Rich. As I turned the dial to adjust the trim tabs for takeoff, the “click, click” of the gears falling into place mirrored my heart climbing higher in my chest.

Throttle? Set to 1700 RPM. My pulse began to increase, seeming to match the throttle speed. The Skyhawk lurched beneath me as the added power attempted to pull me forward. Pushing harder on the brakes, I felt like I could barely breathe. After checking all my gauges to make sure they were in the green, I pulled back the power and said a quick prayer.

“Lord, please keep me safe during this flight. I really don’t want to die” After repeating this simple prayer at least four times, I was ready for takeoff.

Immediately after my radio call, I threw the throttle open and streaked down the runway. At 55 knots, I pulled back on the yoke and… I was off.

As the airport fell away below me, so did my anxiety. Sure, I felt excited, but a sense of calm also started to envelop me. As I continued to fly, picturesque forests and lakes seemed to float below me. The rippling of the sun on the waves below, the sound of the engine all around me, and the knowledge that I was doing something amazing made me feel more alive than I ever had before. My heart was racing again, but this time it was not from anxiety. It was from pure adrenaline.

Turning away from the lakes and rivers ahead, I started flying back towards the airport. As any experienced pilot will tell you, one of the most challenging aspects of any flight is the landing, and with a crosswind pushing me away from the center of the runway, I knew this wouldn’t be easy. Lining up with the runway, I started to descend.
“Branson West traffic, Skyhawk Tango Sierra Whisky final approach runway 21, Branson West.”

As the runway loomed larger before me, I checked my glide path. Four white lights flashed at me from the airport, indicating I was too high. Pulling back on the throttle, I started to descend even faster.

Looking at the lights again, I slowly saw one white light change to red, then the other. Two white, two red, indicating a perfect glide path.

I was back on track.

As I reached the runway and pulled up, the aircraft began to glide about 5 feet above the ground, slowly losing speed. Glancing at my friends watching from the airport terminal, I prayed, “Lord, please help me not to die… or embarrass myself.” Hoping to hear the squeak of the tires kissing the ground, and dreading the sound of a crash, it was all I could do to keep the airplane centered above the runway. The wind kept pushing me to the left, and it felt like I was running out of time. Floating, floating and finally… squeak squeak! Both wheels were on the runway, and I was safe.

I opened the window, and the moving propeller forced a rush of fresh air through the cockpit to greet me. It whipped my hair around me, making me look like Doc from Back to the Future. And like Doc, I felt like I had just accomplished the impossible. I may not have invented a DeLorean time machine, but I had just accomplished something I had only dreamed of doing before. My hard work had paid off, and I had proven to myself that I could accomplish something spectacular.

A radiant smile broke out on my face as I realized that this was only the first flight of many, and I was excited to get back up in the air again soon.

0 comments on “My first solo flight”