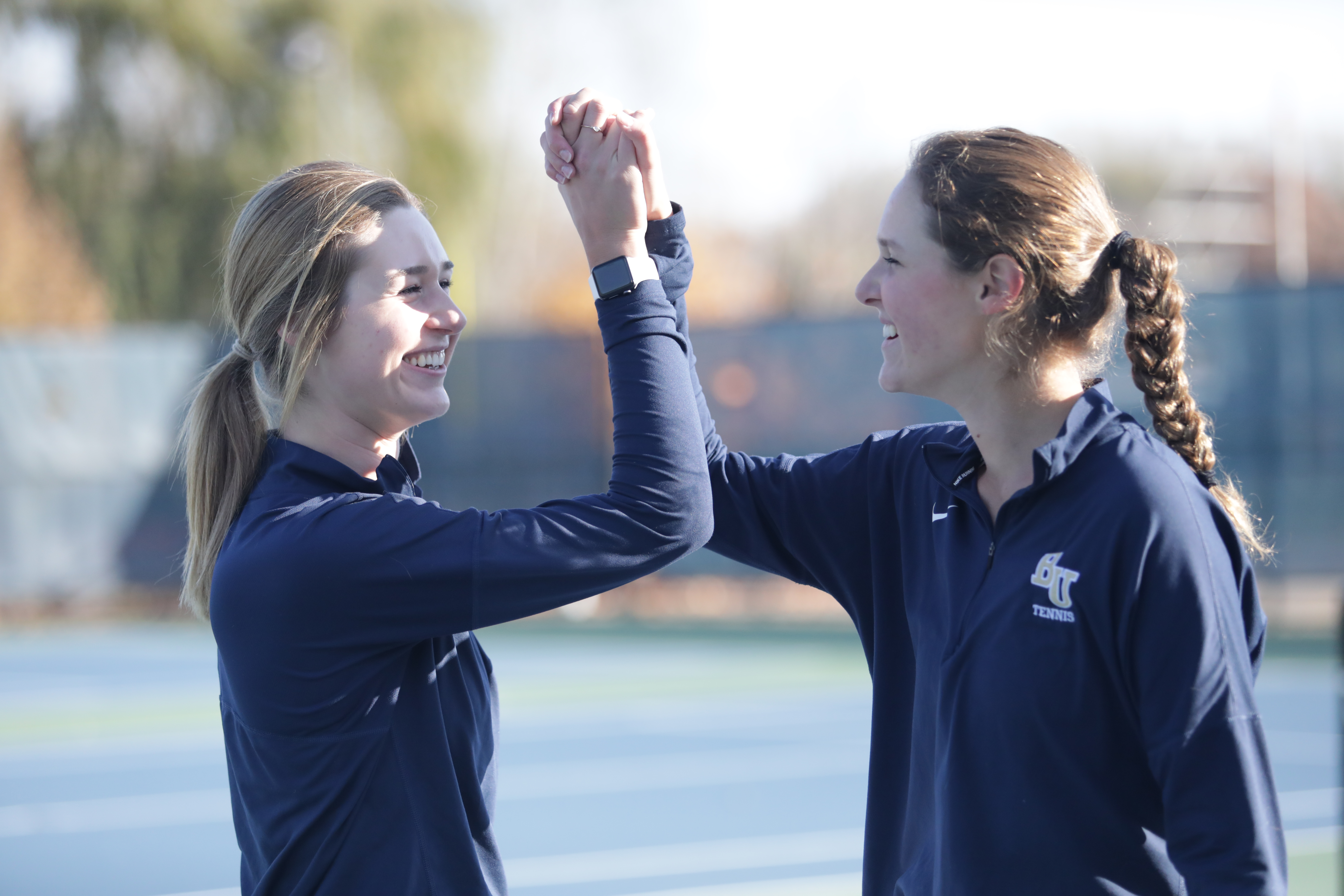 Sisters Maggie and Grace Riermann have been doubles partners since childhood, going from community tennis to becoming the ITA cup champions.

The first thing people notice about Grace and Maggie Riermann is their relationship. They don’t bicker or annoy each other in the slightest. They listen intently to one another because they care what the other is saying. They seem like best friends that just happen to be sisters. Oh, and doubles partners. Their parents love it.

Maggie and Grace have been playing tennis together since they were barely out of diapers. Born 19 months apart, the sisters have been through the ups and downs every sports team has experienced, but they’ve been lucky enough to be together.

Maggie is a junior English education major, and Grace is a sophomore engineering major. They grew up in Grant, Minn. where they attended Mahtomedi High School and played tennis together.

The sisters have played tennis together for what seems like forever, starting with community tennis and continuing as doubles partners at Bethel. Tennis wasn’t always what they thought they’d stick with, but they sure are glad they’re still on the court.

“I don’t know how we stumbled on tennis,” said Grace.

This year, Grace and Maggie headed to Rome, Ga. to compete in the ITA cup for the second consecutive year. The Intercollegiate Tennis Association (ITA) is a tennis competition for all levels of men’s and women’s varsity tennis, including NCAA Divisions 1, 2, and 3, NAIA and Junior/Community College.

Not only are the sisters just good tennis players, but they have an edge to them too. Between their bond as sisters and their experience playing together for so long, they can read each other better than most doubles partners. One could call it a genetic advantage.

The Riermanns are a close-knit family, so when they chose Bethel, Grace and Maggie thought about being close to home and their parents. Grace was a PSEO student during Maggie’s freshman year, which led her to attend Bethel as well.

“I mean, I get to go to school with my sister!” said Grace.

The two sisters are proud to be on a tennis team like Bethel’s, because no one thinks they’re better than their teammates. The team isn’t a bunch of drama infused girls, they have good values and inspiring goals; Grace and Maggie fit right in.

Grace and Maggie have high standards for themselves in tennis, but even higher standards for their attitudes on the court. They never fail to be the better players when it comes to honesty. College tennis competitions are played without a line judge, so players must call the ball in and out on their own. This leads to rampant cheating and lying on the court, just not from Grace and Maggie. They never lie about the ball being in or out. Faith is an important part of their tennis careers, and they want to show their faith through their actions on the court.

Faith and family brought the sisters to Bethel. Tennis was just an add on.