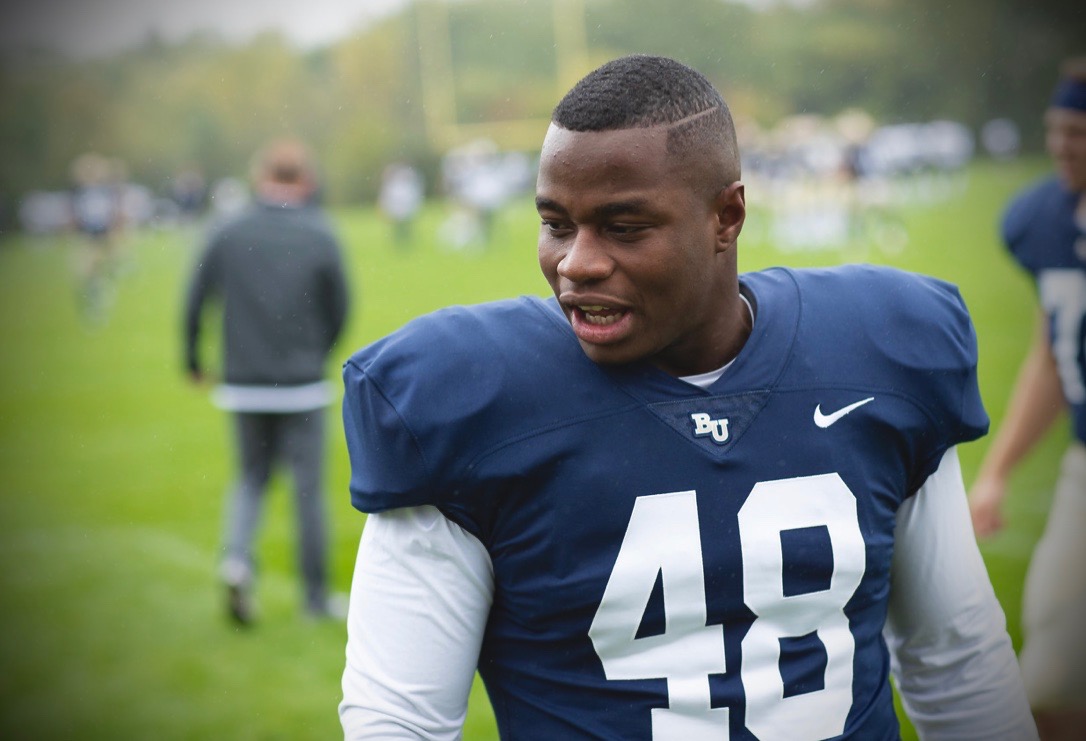 A childhood in the inner city and four years in the military forced Bethel freshman Phil Norris to decide how he wants to be remembered.

Phil Norris felt the sun shining through the backseat window of his family’s green Toyota caravan on Sept. 15, 2015 while his mom held back tears. The car that was typically filled with light conversation and laughter now overflowed with a silent weight. They pulled into the parking lot of the Military Entrance Processing Stations as his mom clenched onto the hope that Phil would change his mind.

Norris found himself fighting his own tears as he watched the man who raised him to think “men don’t cry” well with emotion. Norris embraced each of his family members with the confidence of his return. He turned around and began to head to his hotel room.

“Phil,” his dad yelled with tears.

He had never seen his dad cry, but he knew serving his country was what he was meant to do.

Norris remembers when his high school teammates discussed their plans to attend the University of Minnesota, Drake University and North Dakota State University. They turned to Phil and snickered when he told them he wanted to enlist in the military.

“Okay seriously now, tell us where you’re going to college next year,” his friend who was going to the U of M said.

Since he was a young boy watching his favorite show, “The Unit,” he admired Betty Blue for saving people from a hijacked airplane. He knew he wanted to be that guy. Norris felt a connection to “The Unit” growing up and he wanted to be a team leader like Blue whom people relied on.

Norris, a freshman football player at Bethel University, grew up on Glenridge Avenue in inner-city St. Paul. He and his friends called the street “G Block” because of how many people from the same gang lived there.

Growing up on G Block, Norris realized he had to fight for himself in a crime-ridden area. After witnessing the power outages at his friends’ houses and drug abuse on the streets, Norris thought that was just the way things were.

I wanna get out of here, Norris thought. People seem stuck here.

Then, he thought of the military.

“You’re not that type of guy,” his friends would tell him. “The military isn’t going to accept you.”

They made light of Phil’s stern decision until it was too real to deny. His friend even called him on FaceTime him the day he was leaving to see for herself.

“There’s always going to be someone trying to stop you,” Norris shrugged. “You just have to go out there and get what you want.”

4 a.m. rolled around faster than Norris was ready for.

“It didn’t hit me until I was on the bus,” Norris said.

“Hurry up!” the drill sergeant screamed. He was so close to Norris’ face that their noses were almost touching and Norris felt spit splatter against his cheek.

Despite the yelling, he disregarded the fear and knew that he was just there to do what he had to do. He went through basic training and Advanced Individual Training before being sent to Texas where he was stationed for four years.

Darkness painted the sky at Fort Leonard Wood, Mo. as Norris was up all night pulling guard in basic training. A frigid mixture of rain and snow covered Norris and his fellow soldiers. As he watched over the camp filled with sleeping soldiers, he could barely hold his rifle. After hours of the treacherous stillness of the night, Norris wrestled with himself.

“Why am I doing this? I could just get up and give up, head back onto the warm bus and it will drive me back and I could just turn everything in and go home.”

But Norris knew that was the easy way out. He would think about how he wanted to be remembered. The thought drove him through his lowest points.

Norris wanted nothing more than to leave a legacy.

During training, Norris felt like a game system. He had no control over his own life. The only decision he made for himself was going to bed. Other than that, he was told what to do, where to go, what to wear, how to talk, what to say and what not to say.

“It was as if they took away who I thought I was. I was a puppet on a string.” Norris said. “Who am I when I am stripped of pride, dignity, thinking skills?”

Aside from the military, Norris has always had a passion for the medical field.

After four years of serving, Norris decided that he wanted to pursue a college degree at Bethel University and play football. He dreams of one day starting his own free clinic for people who can’t afford insurance.

Norris made himself at home right away on the football team as defensive tackle.

“Part of that is his spirit,” AJ Parnell, Assistant Coach-Defensive Line and Special Teams, said. “Who he is, how engaging he is, his personality. Guys are just drawn to him.”

Norris will often come yelling into the locker room after a game.

Bethel football coaches AJ Parnell and Mike McElroy noticed something different about Norris when he joined the team.

“There’s a maturity about him. He hasn’t taken a normal path like a lot of other freshmen,” McElroy said. “Whether he screwed up, got yelled at or didn’t do what he was supposed to do, the heart posture for him is ‘Alright, let’s have a good time.’”

When Coach Parnell thinks of Norris he remembers when his family had Norris over for Easter dinner. Norris didn’t prefer the main dish but happily chose a heaping amount of mashed potatoes instead.

“That’s how he is,” Parnell said. “He finds something good in everything, despite circumstances.”

Four years after enlisting in the military, Norris stepped off the bus, shoulders held high, gleam in his eyes. His Combat boots clunked every step he took toward his family. His grandma bursted into tears of joy, his mother’s smile stretched from ear to ear and his father embraced him.