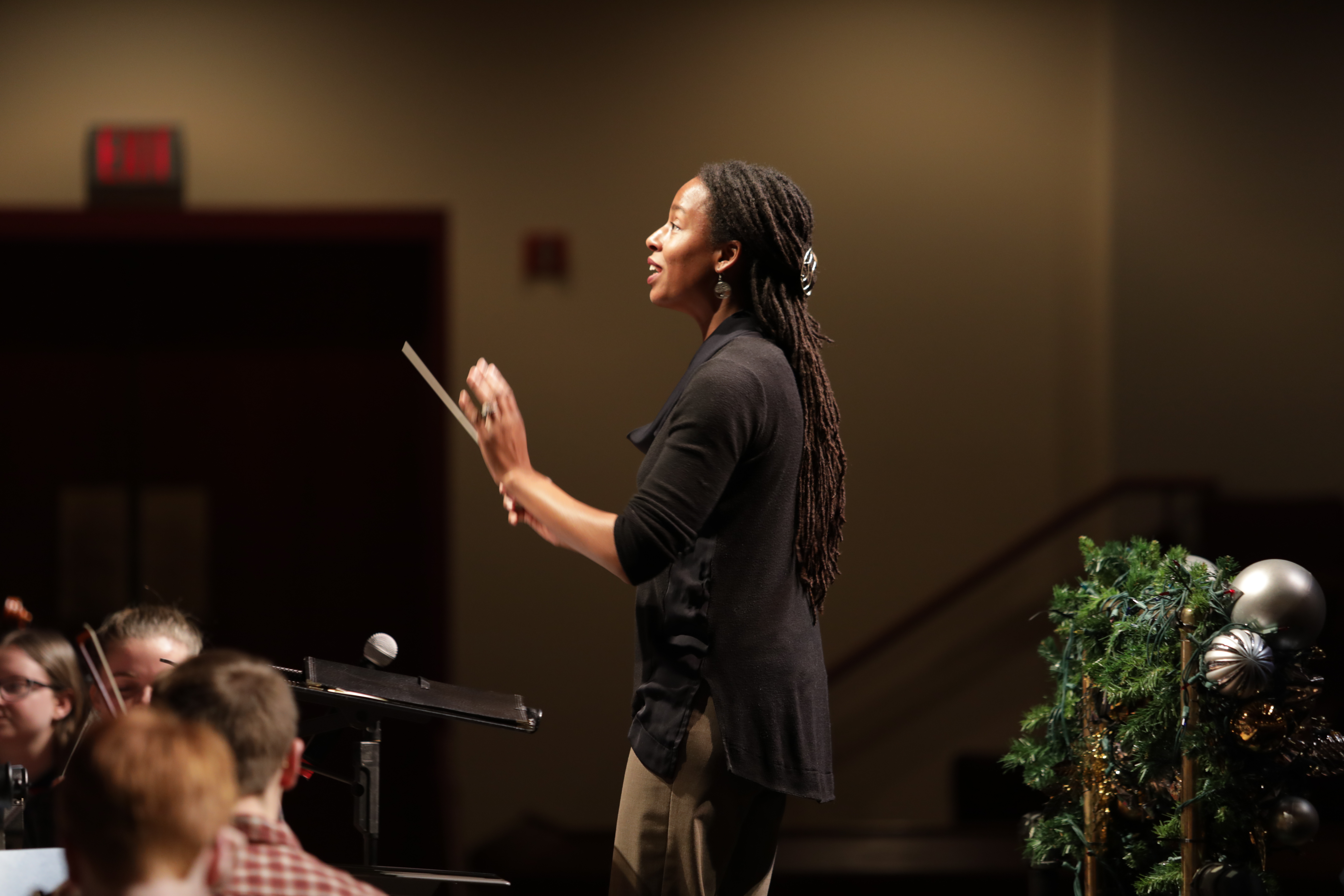 Merrin Guice-Gill stopped her class over and over again until she was happy with how they sounded.

“Excellence is a choice,” Guice-Gill said. “We can be excellent in choir.”

Guice-Gill, the music director at Bethel University since June, communicates this lesson to her students, whether it’s in choir class or a one-on-one vocal lesson. Junior Hannah Barnes, a vocal performance major, is one of two transfer students from Buena Vista University in Storm Lake, Iowa where Guice-Gill was previously employed as the music director. She hears  this message of excellence during every vocal lesson she has with Guice-Gill.

“This is the thing I hate about Guice; she stops you so much from singing,” Barnes said. “You’ll be in the middle and she’ll have you restart over and over until you get to where she wants it. It drives me nuts!”

How she got there

Music wasn’t always Guice’s plan for the future. She worked  towards becoming a chemical engineer while attending Renaissance High School in Detroit, Michigan and even had an internship with Ford Motor Company in their physics and chemistry departments.

During her time at Spelman College in Atlanta, GA, Guice-Gill  found her true calling. The first few weeks of her freshman year, Guice-Gill found herself switching her major to music. Whether it was piano or vocals, she could almost always be found somewhere in the music department.

“I couldn’t stay out of the practice rooms,” Guice-Gill said. “It was like the music building was calling my name.”

She ended up graduating  from Spelman with a Bachelors in Music. This wasn’t a decision she made on her own. Guice-Gill gives credit to where credit is due.

“My grandmother was the one that got me to go to church,” Guice-Gill said. “She also loved classical music.”

Grandmother Desmore King Dorsey helped Guice-Gill find her love of music, which came from  attending St. Joan of Arc Church in New Orleans, Louisiana from during her childhood.

The call to music didn’t simply stop after graduating from Spelman. Guice-Gill went on to receive her masters in music at Rutgers University in New Brunswick, New Jersey, and then her Doctorate of Music Arts  from the University of Wisconsin-Madison. This gave her the background and experience she needed to become the new Music Director at Bethel.

A way to connect

Guice-Gill isn’t just a music director; she is a wife and mother of three to Sydney, Sebastian and Sinclair. he is also a mother and mentor to her students.

For Barnes, who comes from Omaha, Nebraska, it’s nice to have someone around she can go to for comfort when she’s so far from home.

“She’s one of my best friends,” Barnes said.

“I called my mom and said, ‘we’re leaving Buena Vista,’” Gillion said. “My mom’s first reaction was ‘Guice is leaving.’”

Gillion’s parents knew the only reason their daughter would want to leave Buena Vista was Guice-Gill leaving. According to Gillion, her parents trust Guice-Gill with their daughter’s life. And for Gillion, having Guice as her music director and mentor means a lot to her.

“She’s my first female director – she’s also my first black director,” Gillion said, “so when we met, I said, ‘this is somebody that looks exactly like me, and that’s what I like.’”

The connection is there when she interacts with her students, colleagues and even those who simply pass her in the halls.

“Music is a way to connect,” Guice-Gill said.  “We share a human story.”

“When this news was announced to the choir, hearts were broken, and many tears were shed,” said Diane Nusbaum, Contributing writer of The Tack, a Buena Vista University News organization. “She has touched so many hearts in her years here and influenced so many lives.”

One performance Guice-Gill remembers is being chosen as one of 10 conductors to participant in the Sarteano, an Italian choral conducting workshop. She worked with several other conductors and a choir of 30 professionals to perform for one night. Guice noticed a clash in how each culture interpreted music, noting that Eastern Europeans have a deeper connection and emotional pull in their music, while Americans have more ideas behind the music.

“The guy who was Irish was like, ‘I just want you to feel it,’” Guice said as she laughed at the memory.

Dedicated to no end

While some have pop quizzes, Guice-Gill gives “pop magic”, which is basically an ungraded pop quiz. Students discuss some famous composers, like Bach or Beethoven, and compare them to that of today’s famous artists, for example Nicki Minaj. This is what might happen during her choral conducting class.

In choir class, Guice-Gill has each  student call upon their “friend” to sing into their hand, hoping to help them relax and feel the words being sung.

While attending Gesu Catholic School in Detroit, Michigan, a sixth grade Guice-Gill b managed to devise a plan and convince the nuns to let her and her friends hold a book club during recess. This allowed them to avoid the outdoors during the cold winter months.

“The nuns should have probably checked to see which books we were reading,” Guice said, remembering the R.L Stine horror stories. “They weren’t the most Christian books.”

Barnes remembers when Guice was  pregnant with her eldest daughter, Sydney, and was to perform a passion of St. John by Bach. At  some time during the performance, Guice’s water broke, but that didn’t stop her from finishing her performance. When she was done, she walked off the stage and then went to have her daughter.

“It was insane,” Guice remembers.

So whether she’s teaching a class, mentoring a student or interacting with strangers, Guice will usually greet anyone with a smile and warm hello, if not already laughing as she walks the halls.

“You have to choose to be excellent every day, in whatever you choose to do.” A moto Guice-Gill lives by everyday.