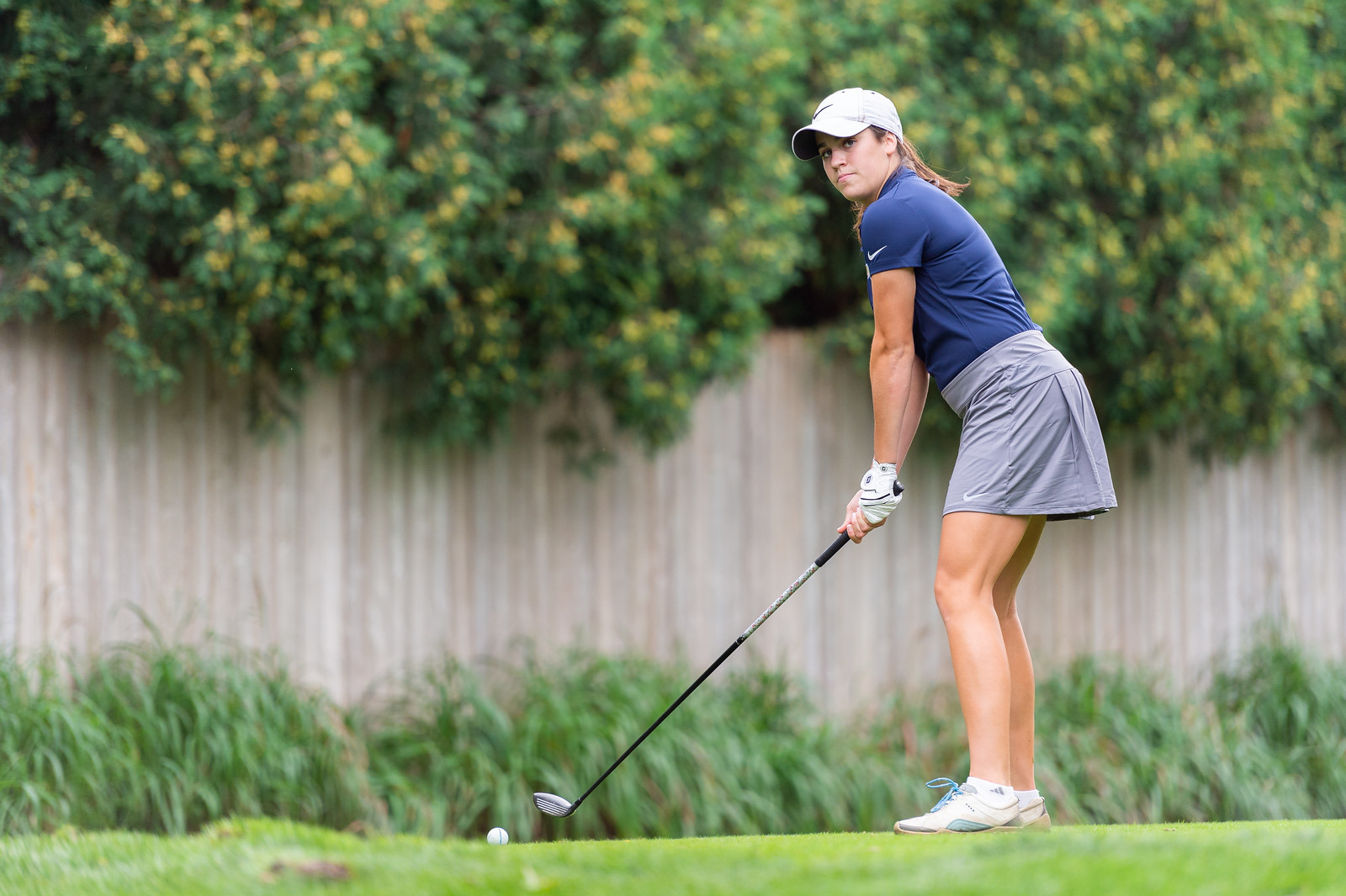 Nicole Miller pursues golf in college despite the difficulties that come with it.

Tennis shoes squeaked. Basketballs did not bounce. Nicole Miller, a high school junior, entered the gym to find the team running out of punishment from their previous loss, again. Every point they lost by was an earned down-and-back. If they lost by 25 points, they ran the gym 50 times. If a player didn’t beat the timer, they ran again. 7 girls were injured that season because of the intensity.

“I was one of two people that didn’t throw up that season because of running,” Miller said.

Her coach, who had been accused in the past of verbal, emotional and mental abuse, changed Miller’s sports career. The coach showed up late, as usual, and called Miller’s name in front of the entire team. The coach asked for a private meeting in a nearby classroom. Together they walked, abandoning the rest of the team during scheduled practice time.

Her leadership was hurting the team, Miller remembers her saying. Her skills were lowering the team’s record, and everything was her fault. Miller felt crushed. Everything she had ever known about herself, her athletic ability and her leadership qualities were shattered.

“I walked away from that conversation feeling worthless,” Miller said.

Throughout that season she would sit in her bed, cry and pick up her Bible.

“I would read a verse and be like, oh my goodness, life is so much more than what my coach is telling me,” Miller said.

When the season concluded, Miller finally explained to her parents the extent of emotional damage she was going through. She never wanted to touch a basketball again. She quit that following summer, before her senior year.

Miller turned all her attention to golf instead of basketball and began leaning her identity was in Christ.

“I couldn’t put it in my accomplishments, ability or what other people said,” Miller said. “I needed to find out who I was.”

From before she could remember, she had been learning to swing anything from a driver to a pitching wedge, familiarizing herself with the sport just for fun. The first season playing golf competitively was her freshman year of high school, when she tried out alongside 85 other girls and made the varsity team for Eden Prairie High School, with a student body of about 3,000 students. The varsity golf team held 16 spots.

As she competed at the varsity level for the first time, her scores blew fans and coaches away. Students knew who Miller was. The fame and attention was tangible, allowing her to thrive off it. Miller was a three sport athlete at Eden Prairie High School, two of which she made varsity as a freshman: basketball and golf.

She walked onto the golf course that spring of senior year for the first time feeling free. As she began searching for a college, she had numerous D3 colleges reach out. These schools were in Ohio, Florida, Arizona and Minnesota. She knew how important having a supportive coach was to her, not how big and important the school was. Trent Anderson, Bethel University women’s golf coach, pursued Miller with hand-written notes, explaining how playing for Bethel would be different.

Miller never thought she would attend a small, Christian school. She entered Bethel with the reputation of being an incredible golfer from Eden Prairie. During her senior year in high school she finished seventh in the state of Minnesota, won two tournaments and scored in the mid 70s.

During Miller’s freshman season at Bethel she won “Rookie of the Year” for the Minnesota Intercollegiate Athletic Conference, All-Region Honors and All-Conference for Women’s MIAC team. This set the stage for the next three years. Walking into sophomore year, she felt pressure due to the awards she previously won. During the spring season of her sophomore year, Miller qualified for the NCAA Women’s Golf National Championship as an individual and traveled to Texas to compete. She finished 31st out of 131 competitors and won All-Region Honors and All-American Honorable Mention.

Despite the upward trajectory of her golf career at this point, Miller battled on Sept. 21 at a tournament at The Wilds Golf Club in Prior Lake. She walked out on the course and nothing went her way.

“It was so hard because I had an entire posse coming to watch me,” Miller said.

Hole 3. Par 3. Miller grabbed her 50-degree wedge and chunked her shot. She sent the ball 80 yards when it needed to go 120 yards. The ball landed short of the sand trap and all she needed to execute was a pitch shot onto the green.

She swung and sent the ball long.

“I then duffed a chip, missed the putt, then made it for a double bogey,” Miller said.

“I hooked my shot on the next tee box [hit it far left],” Miller said. “And I couldn’t believe that just happened. I was 3 holes in and there were 36 holes in the tournament, it was too early to tap out.”

Hole after hole, doubts began filtering through her mind. You’re not an asset to the team. You’re letting the team down. You’re not going to be able to play to the ability you know you can.

Liina Nyrgen, her roommate, sent Miller a prayer before the tournament and Miller taped it to her push cart for this round.

The prayer said, “My prayer is that every single swing you take would be an act of worship toward the Lord.”

After the round, Miller’s dad sat down next to her. He put his arm around her and explained how proud he was. Her golf ability did not earn her father’s love.

Coach Anderson reflected on the round and told Miller that the impact God is using her for at Bethel is not based off of her golf scores.

“Her whole golf journey,” roommate Nygren said, “and especially this season, has been a huge testament to God’s faithfulness. She doesn’t forget that and doesn’t fail to remind me of that.”

One week after Sept. 21st, the MIAC championship took place at Pebble Creek in Becker. Bethel’s top five golfers to compete were Nicole Miller, Katie Engelking, Ana Schwarz, Anna Tollefson and Elena Zaborniak. Heading to nationals was top of mind, they needed to win this tournament.

The first day of the tournament was raining periodically, the second day was 45 degrees and freezing, and the third was all rain.

After the first day, Bethel was second with a team score 315, three strokes behind St. Catherine University. After the second day, Bethel had a score of 316 and St. Cate’s with 318. There was a five stroke difference heading into the third day. Bethel was behind.

Before the third day, the team had a meeting with their coaches on the putting green. Multiple players felt pressure from the coaches, more than normal.

“When you guys [coaches] check your phones, we know that you know where we’re at, score wise, and we don’t want to know that,” Miller said. “We just want to play.”

The meeting on the putting green lasted 30 minutes.

“You could feel the tension,” Miller said.

That evening, the team received a message from Steve Whittaker, a golfer on the senior tour. He shared the story Mark 12 about the woman with two coins. She came and gave her two cents to the Lord. When the Lord looked at her, he called her blessed because she gave everything she had. On the contrary, the man who has more money and gives a larger amount, yet not all that he has, does not find favor in the Lord.

Whittaker takes every golf shot in the attitude of giving his two cents to the Lord and encouraged the Bethel women’s golf team to do the same.

Schwarz and Miller were back to back during the final day of the tournament, Miller following behind Schwarz. Heading into hole 12, Miller was within strokes of her St. Kate’s competitor.

“I was feeling the weight at this point,” Miller said. “I have to keep up because she is doing so well.”

Miller stepped onto the next hole to speak to her teammate, Schwarz.

“Ana gave me a hug, reached into her pocket, pulled out two coins and put them in my pocket, and said, ‘Let’s go!’”

“That was a turning point for me,” Miller said.

After Miller made her putt on hole 18, she glanced at her teammate in the crowd. Schwarz mouthed, “We won.”

0 comments on “Getting out of the sand trap”