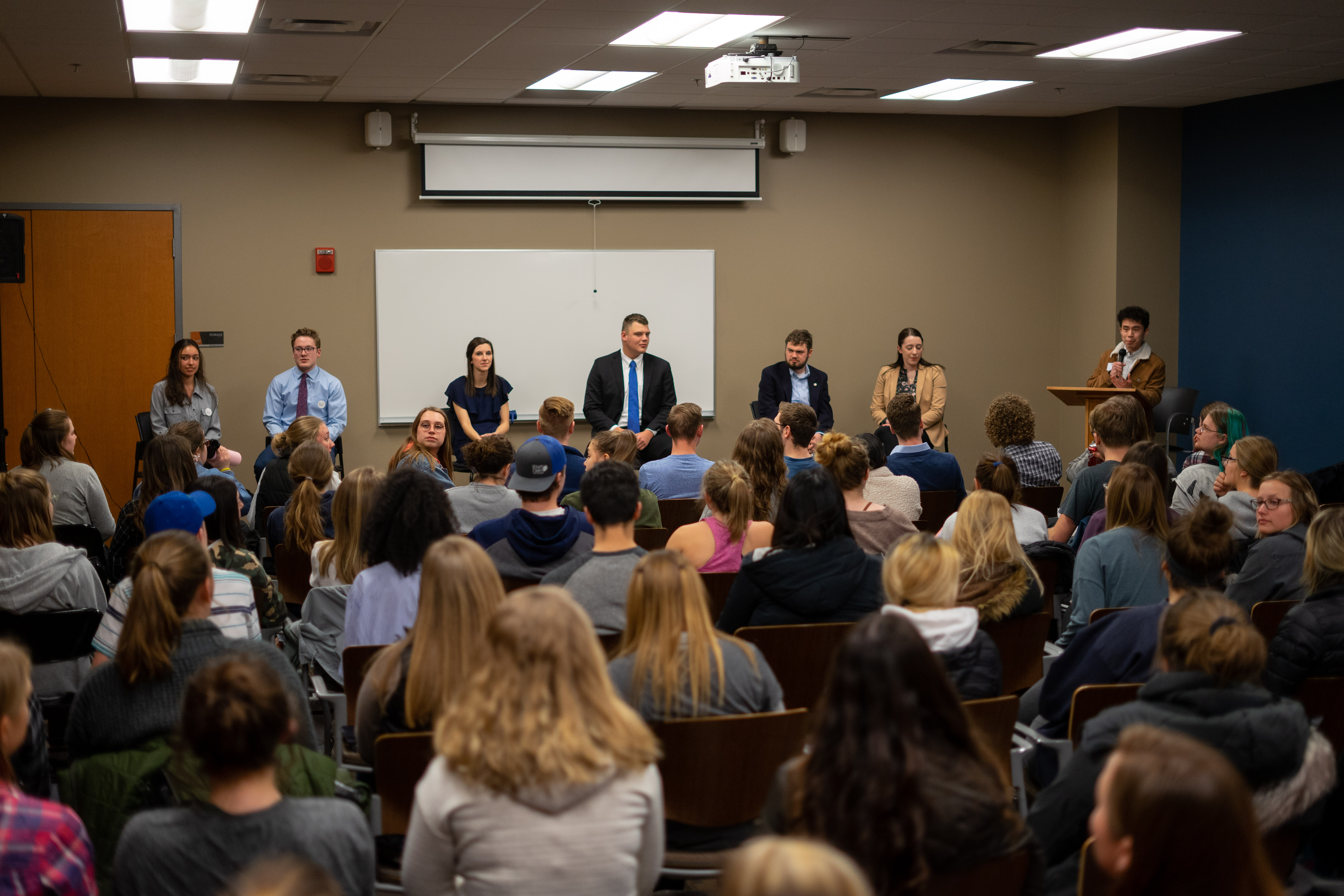 Candidates for next year’s Student Body President and Vice President met Monday to discuss their campaign platforms and hopes for the coming year.

Sisson said one goal of his and Schmidt’s campaign is to maintain and build relationships among the different branches of Bethel Student Government (BSG) and between students and faculty. They also hope to expand on the work of current President Kennadie Anderson and Vice President Lucas Bentrud by bringing more opportunities for nonprofit work to Bethel’s campus. Finally, they said they want to improve Bethel’s community and get the student body more involved in BSG leadership positions.

Candidates Aidan Ruch and Kelsey Williams speaking with a student club leader after the debate. | Photo by Jake Van Loh

Szilagyi admitted she and Jankowski both fit “the Bethel mold,” and stated a desire to hear from those who don’t feel like they do by “being in places where students are.”

“Please talk to us,” Szilagyi said, “We know your g-cals are full, so we don’t expect you to reach out to BSG. We will be reaching out to you in order to make sure your voices are being heard.”

If elected, Ruch said he plans on sending bi-weekly emails as a means of being more transparent with the student body. He and Williams want to hang out in the places students hang out in order to get to know them and best represent their interests to Bethel faculty and alumni.

Ruch said there is a widening gap between BSG and the student body that needs to be addressed. With various changes coming to Bethel, he and Williams want to figure out new ways to support students.

Szilagyi acknowledged the presence of divisions within the student body.

“Whether they are not from an Evangelical background, or commuters, or BUILD students or students of color, some students on our campus feel that their voices are not being heard,” Szilagyi said.

Jankowski said it becomes dangerous when only one type of voice is heard within student leadership, and more diverse voices are necessary moving forward.

Schmidt said she hopes to partner with admissions by expanding clubs and promoting BSG subgroups, as she knows their existence can make or break a potential student’s decision to attend Bethel. She and Sisson also hope to change the discussion on sexual harassment on-campus.

All three candidate pairs said they want to push for more diverse voices within BSG leadership next year.

When asked who among the other candidates they would vote for, all six individuals declined to give a definitive answer, using the allotted 90-second response time to list strengths of their competitors.

“I’m actually so encouraged by how similar our campaign platforms are,” Williams said. “I’m not even sure how I would vote if I were in your shoes.”

“It shows that Bethel is going to be in good hands no matter what,” Schmidt said.