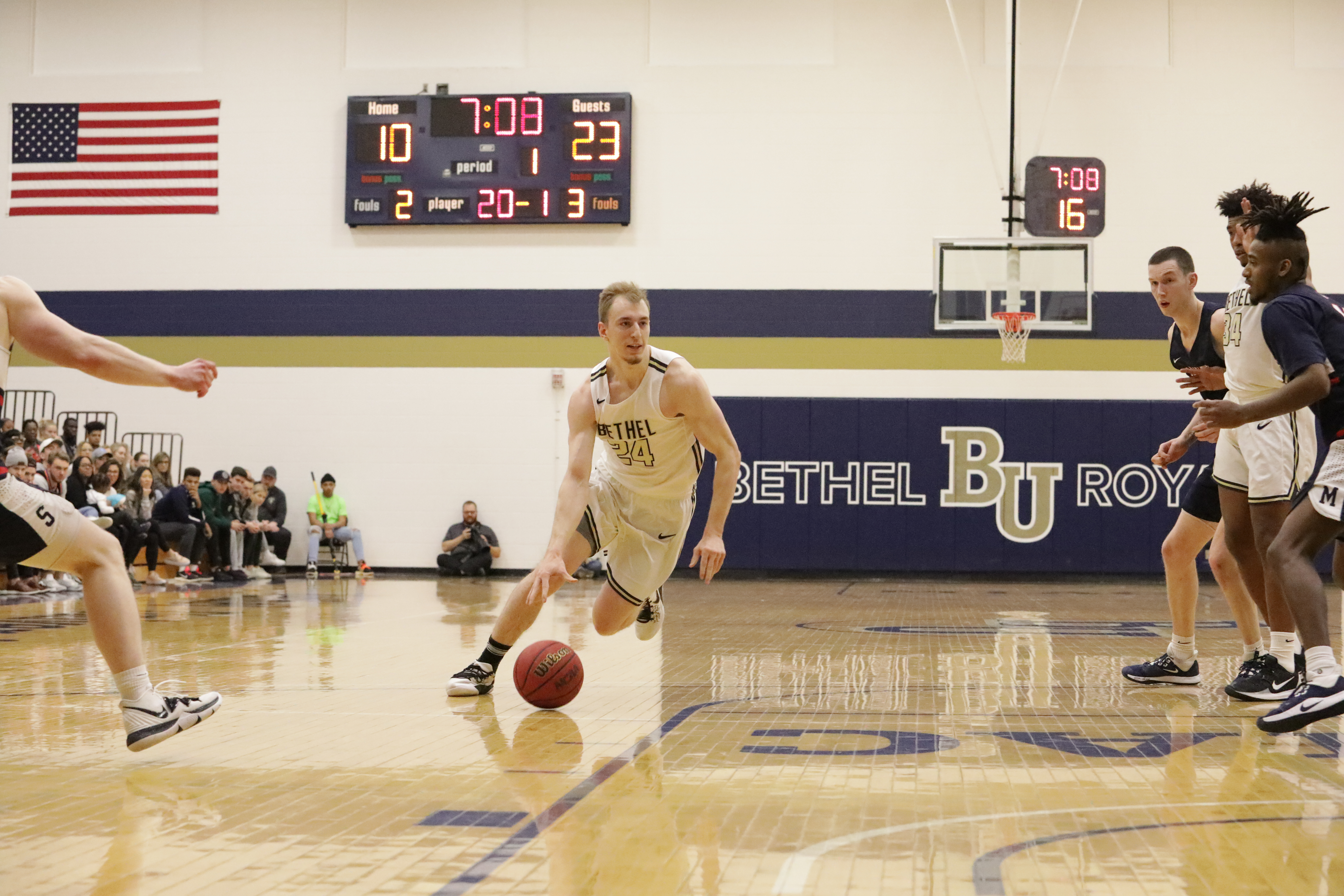 Sounds off the Robertson Center walls Tuesday night echoed with intensity. For one team, this was nothing new. For the other, a feeling not felt in over a generation.

The 4-seed Bethel Royals, making their 25th all-time appearance in the MIAC playoffs and 19th out of the last 20 seasons, welcomed the 5-seed St. Mary’s Cardinals in their first playoff game since the inaugural MIAC conference tournament in 1985. And they came out with a generation’s worth of playoff energy to start the game.

The Cardinals exploded in the first half thanks to hot shooting and spirited defense, jumping out to a quick 20-7 lead.

Leading scorer Eli Cave led a balanced scoring attack in the first half, scoring 15 of his 27 along with seven players making their own mark on the score sheet.

For as well as St. Mary’s shot it in the first half, the Royals shot it equally as bad, shooting 19 percent from three-point range, compared to St. Mary’s 47 percent.

Chandler Wellman led the way in scoring for the Royals in the first half with seven points, accompanied by Jamal Davis with six.

The Royals’ solid defense that had proven to be enough for most of the season could not stop the Cardinals on their way into the half.

Before the Royals blinked, the lead swelled to 12 points, then 14 and finally the underdog Cardinals led 35-17.

Coming into the second half, the Bethel student section, trying to inject life into their team, stood up and made raucous noise, knowing their playoff hopes were on life support. Chants of “defense” boomed from the energetic fan base, only to be silenced by the red-hot Cardinals.

As soon as the Royals gained some momentum, Cave and Cardinals had the answer: in the form of timely three-pointers. Cave, along with Sawyer Rosner and Kareem Anthony-Bello, went 8 for 15 from three-point range to give the Cardinals an insurmountable advantage.

Bethel tried to get back late with a run to cut it to 12 with two minutes to go, but it was too little too late.

The Cardinals won 72-59 to advance to play the St. Thomas Tommies Thursday night in St. Paul.

Isaiah Carver-Bagley, otherwise known to the student section as “ZEKE,” scored a double-double with 12 points and 10 rebounds. The Royals put together a strong season but could not get it done this year.

On Thursday the women’s basketball team hosts the Gustavus Gusties at 7 pm.

Congrats to all the seniors who played their final game for Bethel.