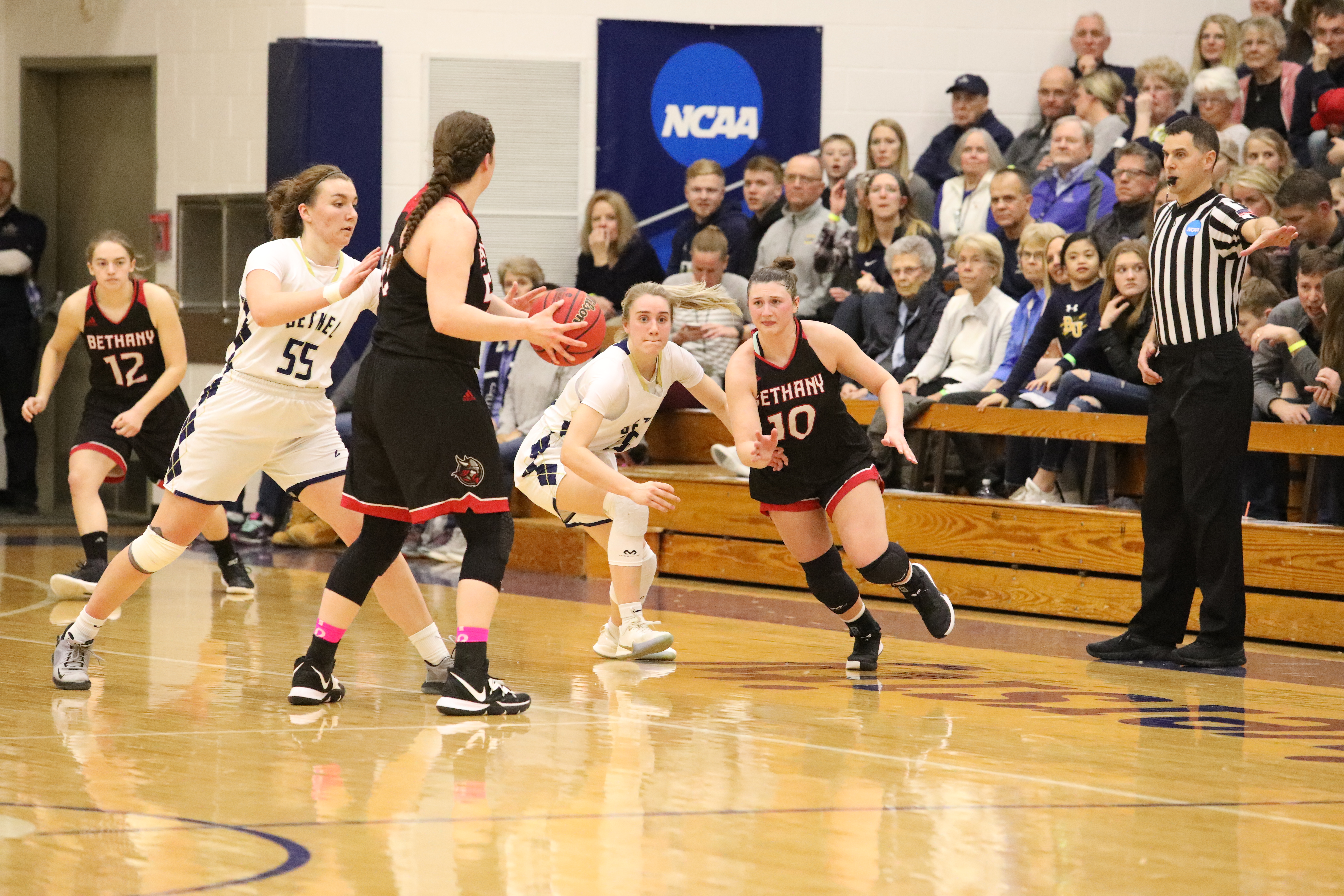 The Bethel women’s basketball team’s near-perfect season came to a close Friday in a 62-58 loss to Bethany Lutheran in the first round of the NCAA Division III tournament at the Robertson Center.

The Royals found themselves down three at the end of the first quarter but with two seconds left a three-pointer from Sydney Blandin brought them back even with the Vikings at 15 points.

Elizabeth Schwarz was put to the test being tasked with guarding Bethany Lutheran’s leading rebounder, Hanna Geistfeld, who led all players with 12 rebounds before fouling out.

Schwarz made her first and only three of the season after throwing up a pump fake before letting it fly much to the pleasure of the Bethel student section who then exploded in applause.

Senior guard and MIAC MVP Taite Anderson drove into the paint and made a bucket but the official called it a charge. The students and parents booed while the three NCAA officials conferred. There was a roar when they changed the call to an and-1.

Junior guard Bella Williams forced opposing players into making bad passes which led to turnovers and the Royals streaking up the court for scoring opportunities.

She had seven steals in the first half.

“That’s just what Bella does,” Coach Jon Herbrechtsmeyer said, “Bella does whatever we need if its steals if it’s just lock down defense…it’s a testament to how good Bella is.”

The Royals forced the Vikings into 15 turnovers and 27 percent shooting from the field in the first half. The Royals led 33-25 after finishing the half on a 6-0 run.

The Royals defense didn’t allow a point and led by 13 until the 6:59 minute mark of the quarter.

The Royals were beginning to gain some breathing room but their lead was spoiled when Bethany Lutheran went on a 9-0 run as Abby Olson connected from three and had an and-1 layup. She ended the night with a game-high 21 points.

The game was tied at 46-46 going into the fourth quarter.

The Royals and Vikings traded blows the entire fourth quarter with three ties and three lead changes in the last 4:09 of play.

The Royals would respond again and hit a three of their own. The Vikings would then hit a layup to bring the score within one.

At 1:11, down by one, the Vikings hit a pair of free throws to go up by one. After a series of time outs and drawn up plays that led to shots which did not connect, the Royals found themselves down by four points and inevitably watching the clock hit triple zeros on their 26-2 season. Earlier in the month, Anderson was named the MIAC MVP and Herbrechtsmeyer won MIAC Coach of the Year.

After the game Herbrechtsmeyer held back tears while talking with seniors Taite Anderson and Haylee Barker, who did not play.

“It’s not about the loss that we’re sad,” Herbrechtsmeyer said. “We’re sad because it’s over.”

Congrats to the team on their year.

0 comments on “Historic season comes to an end as Bethel loses to Bethany Lutheran.”