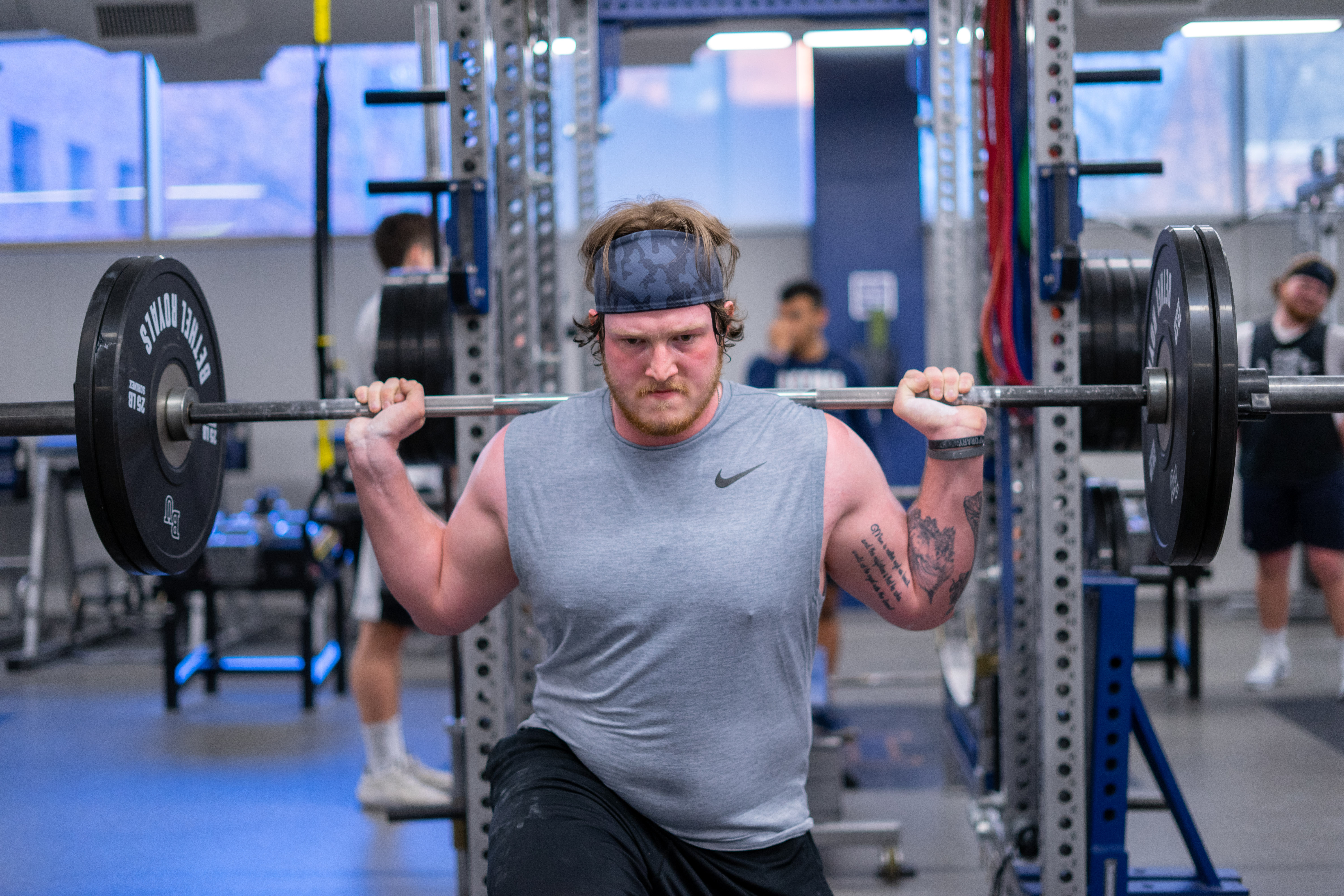 Kolja Thielmann, a 22-year-old Air Force veteran began his college journey at Bethel this spring. He wants to work his way onto the football team, but not to play. He wants to understand what athletes go through so he can become a role model for future athletes in his line of work.

He still checks around corners. He thinks about how many people are in a room, where the closest exit is and how he should respond to an active shooter.

He is constantly playing the “what if” game.

Kolja Thielmann (pronounced KOL-HA) has been in the United States Air Force for the last four years. He wore a blue beret during his time in the Air Force as a sign of his rank as a Senior Airman. Shortly after attaining Senior Airman, he decided to leave the Air Force to further his education, which was his ultimate goal before enlisting.

Thielmann, 22, is majoring in bio-kinetics at Bethel and wants to become an athletic trainer. He has been working out with the football team because he wants to understand what players go through and be able to help them in the best way possible. Thielmann also wants to play football since he missed out on his junior year in high school due to an ACL injury.

“I knew I had something left in the tank,” Thielmann said.

Thielmann decided on Bethel because he felt that the football coaching staff believed in him and wanted to give him a shot at playing again. Compared to other schools around the Twin Cities, Bethel made the greatest impact on Thielmann.

“My coaches were the biggest role models in my life,” Thielmann said. “They taught me about hard work, discipline, putting in more for somebody else, more than yourself. I see the way our generation is going and how future generations are losing role models, so I want to be that kind of influence for the next generation. I want to teach these young men or women hard work.”

Understanding what the players go through is important to Thielmann. He wants to be able to tell his future athletes that he knows what it is like to have that. He thinks this will give him a level up on the players when teaching because it comes from a place of experience.

Thielmann went to San Antonio, Texas for basic training during the summer of 2015. He spent seven and a half weeks trying to keep up with the busy days full of preparing for any mission that may fall onto his lap, trying not to miss home, and learning the ins and outs of the Air Force.

After basic training, Thielmann entered a career field of security forces, where he prepared to be stationed for 14 weeks before he landed in South Dakota, where he would spend the remainder of his time in the Air Force.

“I was in a career field where I saw, learned and did great things,” Thielmann said. “I met great people and had many experiences. But it just wasn’t everything I wanted. It wasn’t what was making me happy.”

Just a few short months ago, Thielmann was taking 911 calls in Rapid City, South Dakota, responding to domestic violence cases. Living, as he explained, an “if you can’t keep up, don’t step up” kind of mentality.

Today, Thielmann is enrolled in college courses, working out with the Bethel University football team and trying to adjust to a culture of Birkenstocks, Bible studies and Royal Grounds coffee.

“You really don’t change,” Thielmann said when talking about the transition from the Air Force to Bethel University.

“There is a famous line by General Mattis that says, ‘Be polite, be professional, but have a plan to kill every single person you meet,’ Thielmann said. “As intense as that sounds, it is kind of this thing where you can be civilized but you have to be able to turn that off.”

Thielmann has experienced high-intensity days filled with answering distress calls, fulfilling missions, and has needed to grow up fast within the last four years.

Coming to a small university like Bethel, there is a big difference between him and his younger peers.

Students at Bethel University most likely have not seen what Thielmann has seen. Many haven’t dealt with suicidal 911 calls, child abuse cases, or the need to constantly be on alert of any danger. But he understands that he needs to learn how to communicate with students and respect them.

“He had a lifetime of responsibility,” Bethel Executive Director of Military and Veteran Services John Morris said. “They gave him a weapon. He guarded a base, so he matured at a very accelerated rate. He won’t put up with a lot because he is here on a mission to get an education and get a job.”

Of Thielmann’s three siblings, two are currently serving or have served in the military. When he decided on the Air Force, his parents were not surprised, but Thielmann explained that his parents did worry about their kids going into the military instead of going to college.

“Other parents are worried [their kids] will drink alcohol when they go to college, not get shot,” Thielmann said.

Thielmann’s parents are supportive of their children’s decisions to enlist and make sure to wear their U.S. Air Force sweatshirts and mention rank promotions in the yearly Christmas card.

Thielmann described his time in the Air Force as a time to think independently and to think for yourself so you can realize who you are as an individual. He said that there needs to be a “come to Jesus moment.”

Church has been intimidating to Thielmann for the better part of his life, so coming to a Christian school wasn’t easy. He identifies as an introvert and wants to figure out his relationship with Jesus on his own time, alone.

“I have always viewed my relationship with God and Jesus as a relationship between a coach and a player,” Theilmann said. “You learn the playbook, rules and you learn the way you are supposed to handle yourself. Then you go out and you deal with it yourself. Your coach is on the sidelines helping you, but you have to execute on your own.”

0 comments on “Learning the playbook”