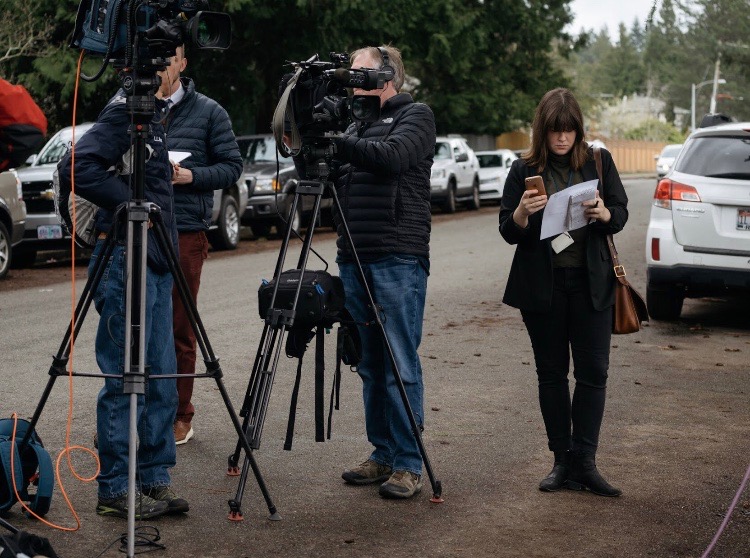 A Seattle Times reporter reflects on covering the early stages if COVID-19 as well as how the pandemic has shifted the lives of thousands of journalists.

Back in March, Seattle Times journalist Paige Cornwell reported on coronavirus outside the Life Care Center of Kirkland, the nursing home where 37 residents died from COVID-19 and the site of the first outbreak in the United States.

“At some point, I realized I really am at the first place where this was considered an issue, and no matter what happens, no matter how many cases there are somewhere else, this will always be the first place in history,” Cornwell said. “It was kind of a jarring feeling.”

Cornwell, who taught as an adjunct professor on a Bethel journalism and design trip to India in January, says the pandemic has hit journalists particularly hard – left and right, she saw friends and acquaintances being furloughed or even laid off from their news outlets.

Many of them said they thought they’d be OK for a month, but they weren’t as sure about the next month. Others were worried about medical bills or paying student loans.

Cornwell thought, ‘OK, how can we help them?’ She decided to reach out to friends and family over social media for support, but one post turned into something much bigger.

“It really started off with a small ambition, where I just posted on Instagram about wanting to raise money for people I knew in Washington, and it kind of exploded,” Cornwell said. “I was immediately getting Venmo contributions and we eventually created a GoFundMe, which just absolutely took off. I had no idea it would do that.”

As of now, Cornwell’s GoFundMe page has accumulated more than $82,000. She says she’s sent money to 290 journalists who were either furloughed or lost their jobs.

Cornwell says one recipient recently sent her a message saying she is now able to pay an unexpected medical bill, which means she won’t have to be late on her student loan payment. Another said he was able to pay for a new piece of camera equipment because he has to freelance now. A few others said they applied for unemployment but haven’t received it yet, so the fund is helping them get through the next few weeks.

“I think I’ve learned that humans are resilient when they have to be,” Cornwell said. “And for the most part, the majority of people want to do good and want to help in whatever way they can. I don’t think I recognized that as much before, that we do need to be around each other and we do need to see how everyone’s doing.”

Photo by Grant Hindsley of The New York Times. Courtesy of Paige Cornwell.

0 comments on ““People want to do good”: Paige Cornwell”