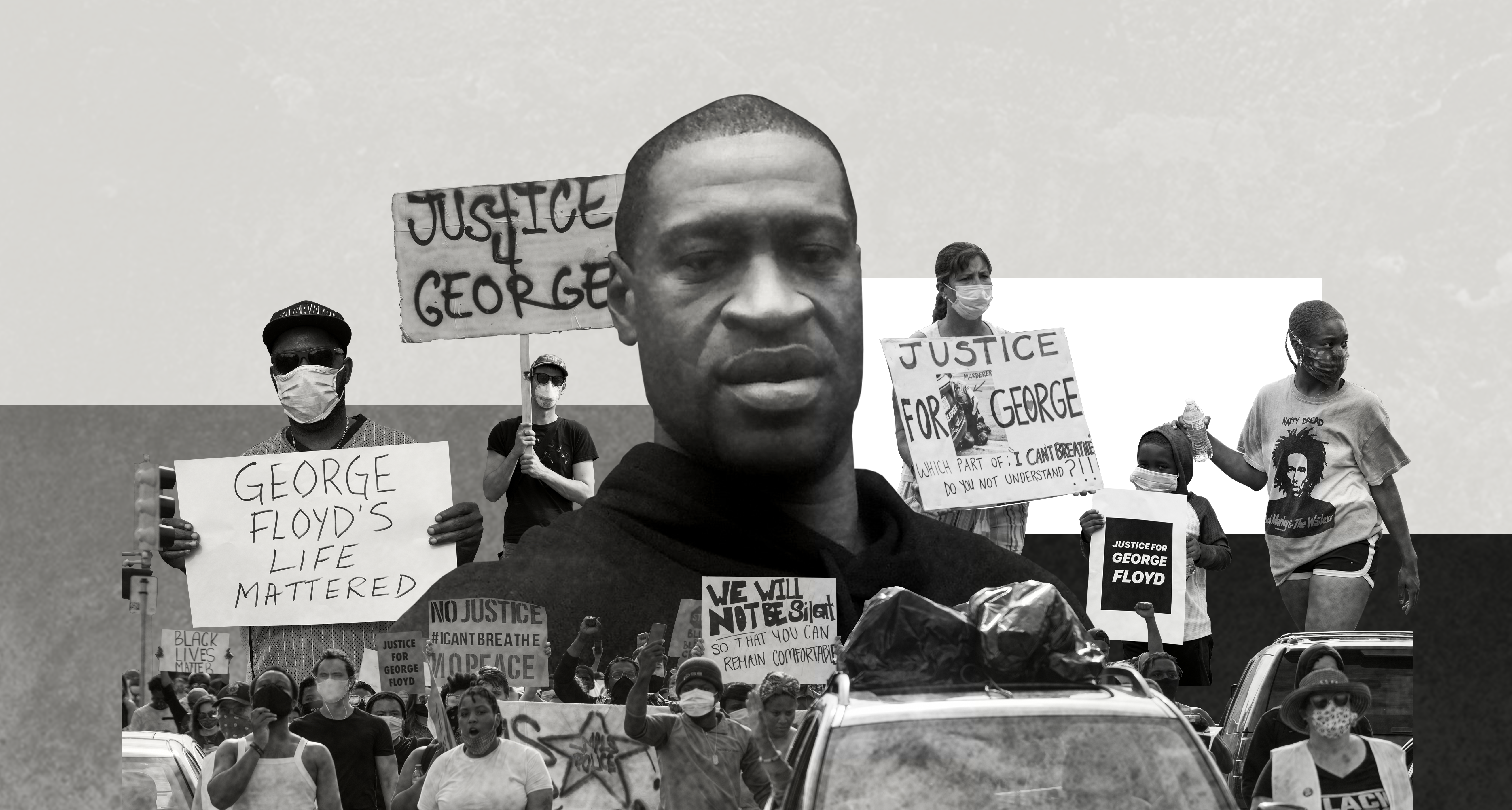 Bethel community reacts to the death of George Floyd.

Derek Chauvin, the police officer who pinned George Floyd with his knee Tuesday was taken into custody by the Bureau of Criminal Apprehension today around noon, according to Minnesota Department of Safety Commissioner John Harrington.

Governor Tim Walz announced this morning on MPR that the state took over the security situation in the Twin Cities, sending in state troops and National Guard members around 3 a.m.

Bethel sent out an alert at 4:45 p.m. Thursday shutting down campus due to reported protests in Ramsey County. Students living on campus are allowed to stay and will be protected by the Security office with the help of Ramsey County. The closure continues today as protests carried on through the night.

In response to George Floyd’s death Monday, protests broke out at the site of the incident and spread out across the Twin Cities area Tuesday, running through the night into Wednesday and through Thursday night, when a Minnesota Police Department Precinct 3 was overrun. Buildings were burned, police cars were graffitied, stores were looted and at least one more life was lost across the Twin Cities. By Friday morning, many protestors cleared out leaving clouds of smoke and remnants of signs on the streets.

Minneapolis Police Chief Medaria Arradondo terminated four MPD officers Tuesday afternoon who were involved in the incident, and Minneapolis Mayor Jacob Frey even called for their arrests, which didn’t happen as of Thursday night as the protests escalated along University Avenue in St. Paul, Lake Street in South Minneapolis and downtown Minneapolis.

Floyd, 46, was pronounced dead Tuesday after being handcuffed and pinned down under a police officer’s knee on 38th and Chicago Avenue in Minneapolis. The arrest was made Monday after police received a call regarding a potential forgery.

“I can’t breathe, please, I can’t breathe,” Floyd said in a bystander video (warning: the video is graphic) as the officer kept him pinned for over five minutes.

What The Clarion found from its community was a call for change and empathy.

“Recognize that for African Americans, the brutal death of George Floyd is not an isolated incident. In the last few weeks, we have experienced the death of several unarmed African Americans (Ahmaud Arbery and Brionna Taylor) and witnessed the harassment of several others (Amy Cooper, Fedex Driver in Alabama, etc.). The compounding of the pain of these kinds of incidents over decades and centuries has left a lasting and permanent fracture in the lives of African Americans.”

“First, I’m reluctant to speak because we should be hearing from people of color. But, I am going to answer, because I am the mother of a black son. While I’m also a privileged white woman, I do have some personal insight into the fact that for many this is not only heartbreaking, it is absolutely terrifying. My body was physically shaking yesterday in anger and fear. And I’m a privileged white woman! But I kept thinking of my son being under that knee and crying out for his mother.”

“How can we make a difference? Start by asking yourself the following questions: When you first heard about the killing of another unarmed black man by white officers, did you begin to make judgments about who was right and who was wrong before you actually learned anything?”

“Speak out against injustice. This is not a time to bystand. Know why we should respond – not political correctness, but biblically rooted.”

“I want it to be known that I do not represent the voice of the entire black community or people of color in general. Something I would personally like to see more is people gaining a better understanding of their privilege whether that be as a white person or as a person of color. Avoid making a habit out of learning at the expense of people who are in mourning. Don’t go to them to seek validation for your efforts, whatever that may be. Listen to them; elevate their voices. These are your classmates sharing their hard experiences with you; these are the events they put on at school.”

The parking lot of Lake Street Target, which is 0.2 miles from the 3rd Precinct and 3.3 miles from the site of George Floyd’s murder. This Target was looted along with many other businesses nearby. Photo by Will Jacott

“Marginalization is insidious. Police brutality is real and prevalent, but black people face smaller versions of this everyday—in the classroom, in the dorms, in BSG, on sports teams, etc. Often it’s well-meaning people who perpetuate it. We have to be willing to face our own biases and be committed to doing better. None of us are perfect, but we have a responsibility to ‘go and sin no more.’”

“Please, listen well and try your best to understand and believe that people’s trauma is real. Don’t be quick with Scripture to pray someone’s pain away. Sit with one another, grieve with one another and seek ways to be proactive, not reactive. Pray, read, cry, rest and reflect; seek positive action.”

“George Floyd was murdered 10 blocks from my own home in South Minneapolis and we have lived the last few days with the sirens, explosions, and ash from the protests and riots.  The protests and riots are the result of blatant injustice and should not detract from the reality that buildings can be rebuilt but a life taken cannot be restored.  My heart breaks.”

“Stand up for justice not only in spaces where it’s trendy (e.g. social media) but also where it’s uncomfortable (e.g. family and friends). Humbly acknowledge our own blindspots when it comes to racism. Re-examine it regularly and confront the ways we are complicit in upholding white supremacy. Minnesota is one of the top five most segregated states in the country, and being at Bethel can make it easy to feel abstract and distant from the cities, which indeed shows that very different lived experiences exist within the same metro area.

“We need to have empathy for the very real fear, pain, frustration and despair that many of our community deal with. We also need to be sure that we do not write off injustice by focusing on the rioting. In the words of MLK, ‘A riot is the language of the unheard.’”

“When you see rioting or looting following protests about another death of an unarmed black man in police custody, does the rioting/looting affect your judgment negatively toward the dead black man, or the black community in general?”

“How do you personally present yourselves in those moments? Do you hold a posture of a learner? Or are you defensive? Are you dismissive? It shouldn’t take for you to see ripe incidences of violence in your face for you to understand that there is an issue.”

“Acknowledge it – don’t dismiss it. Realize that you might be part of the problem – and confess it. Know that your journey and emotions may be different from others. Turn it to action.”

“I want to be clear: we’re all grieving and feeling that sadness and hurt, but we need to be careful to make space for black people to grieve more. We cannot center ourselves in a narrative that is not about us and does not impact us on the same level. But for us allies, anger needs to be a transportation—not a destination— from complacency to justice.”

“If you’re a white person, resist any temptation to: (a) make it about you; (b) be a savior. Just be a listener, a friend and an ally. Pray, pray, pray for God’s grace to love the ‘least of these’ and even your enemies. But stand against injustice as if the injustice were done to you and those you love.”

“Educate yourself.​ Listen to podcasts (1619, About Race, The Diversity Gap, Pod Save the People), watch movies and television shows (Dear White People, When They See Us, The Hate U Give, Selma), read articles and books (Heavy: An American Memoir, Just Mercy, White Fragility) to learn more about the ongoing system of oppression in our country. This action step is specifically directed at my fellow white people/those in positions of privilege and power.”

“It is essential for white people to acknowledge white privilege and systemic racism and take responsibility for educating themselves. This is not a momentary commitment but a commitment to long term, transformational work.  The good news is, you have complete control over the ability to do this work, even from home.  This is a really big task but there are a lot of great resources available, many listed in the documentary  Anti-Racism Resources. Read the powerful and clear article by Cory Collins from Teaching Tolerance,  “What is White Privilege, Really? Recognizing white privilege begins with truly understanding the term itself.”

“Come into the neighborhood and assist with clean-ups, articulate your lament on your social media pages and share with others that this is not how things ought to be. If you must protest, do not join in the destruction of communities. People rely on the small stores and businesses that have now been destroyed in places like South Minneapolis. Above all, ask the Lord to help us find a way forward that acknowledges the sins of the past and the present that we might have a more just tomorrow.”

“Talk to your white friends and family that don’t understand why this is a big deal, or who want to write everything off because of the looting. Try to help them see through someone else’s eyes. Call your local representatives and demand justice for George Floyd. Look for ways to serve others in your community (clean up efforts, volunteer at food shelves or community gardens, donate blood). Don’t just stay at home. Little things alone don’t fix the big things, but they still matter.) Read and listen. Here is a great starting place.”

“To the black people who are angry, allow yourself to feel it. Don’t let anyone police how you are supposed to respond to these events or your emotions. This is your lived experience. To the white people and nonblack POC that are angry or frustrated or sad: Also sit in it. This too can be part of the learning. Imagine what it is like to experience these emotions consistently. Allow these emotions to fuel your pursuit of justice, however you decide to.”

Quotes have been lightly edited for length and clarity. Additional reporting by Emma Harville, Will Jacott and Zach Walker. Additional information gathered from the Star Tribune, Minnesota Public Radio and the New York Times.

2 comments on “Twin Cities in pain: Where do we go from here?”