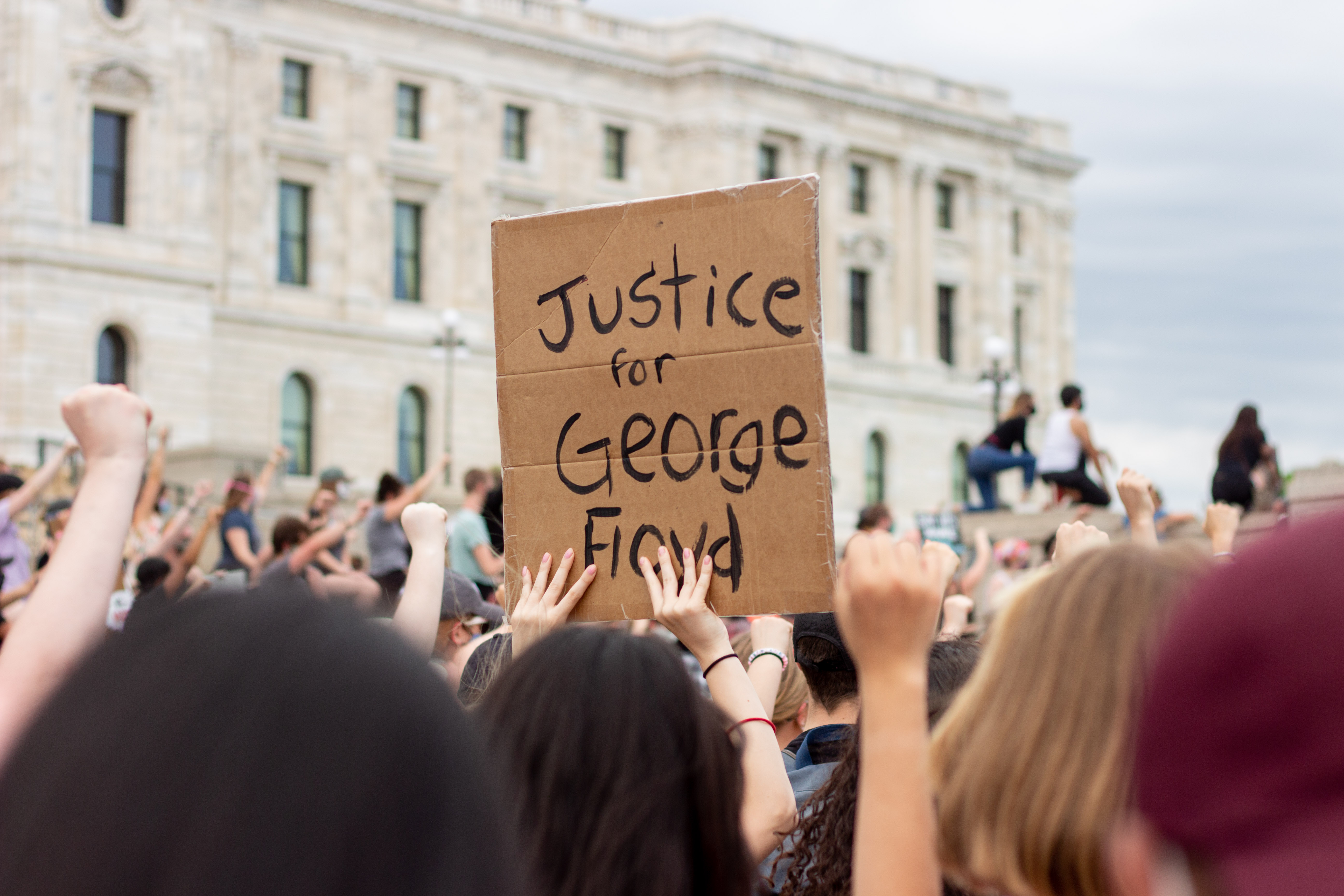 In both Minneapolis and St. Paul Tuesday, peaceful protestors transformed religion, youth and anger into a collective call for justice and change.

The crowd outside Cup Foods hushed as Janice Bad Moccasin began to sing Tuesday afternoon. She stood on the corner of Chicago Avenue and East 38th Street in Minneapolis in front of a ring of flowers and hundreds of signs painted with phrases, including “black lives matter,” “justice and freedom for all,” and “I can’t breathe.”

She sang on the same pavement that held the limp body of George Floyd, the 46-year-old black man killed under the knee of Minneapolis police officer Derek Chauvin May 25, just eight days earlier. Her song was of lament.

She was part of multiple scenes of protest in Minneapolis and St. Paul this week.

Bad Moccasin, a member of the Crow Creek Dakota tribe, visited the memorial as part of no specific organization, but rather called herself a lifelong “Dakota woman of service,” having worked in the past with grieving families dealing with loved ones passing to the spirit world. She said she was there on behalf of her mother and granddaughter, two other Dakota women who are relating to the racial tensions that surround the death of George Floyd.

With help from her best friend, Ananya Chatterjea, a woman from Kolkata, a city in India’s West Bengal state, and the artistic director of Ananya Dance Theatre in St. Paul, Bad Moccasin smudged the grounds, an ancient Native American ceremonial practice involving the burning of sage and waving of an eagle feather meant to spiritually purify an area.

“We together as indigenous and brown women felt strongly moved to offer our prayers together at the memorial site,” Bad Moccasin said. “I asked the creator to bring [George Floyd] home in a loving way.”

“A new sacred fire awakens in our hearts to carry forth peace and justice for the black nation, their beloved brother and a greater humanity.”

After smudging the memorial, Bad Mocassin sprinkled Gambler brand tobacco on the pavement between bouquets of flowers and began singing in her native Dakota language. The buzz created by the hundreds of other protestors who surrounded her quickly dulled to a low hum.

She sang the Dakota word “Wacekiya,” which describes a form of praying, cleansing, releasing deep pain and giving to [a] creator. It’s closest English equivalent is “to cry.”

“Look in [your] hearts and cry,” Bad Mocassin sang. “Cry! Be moved to tears.”

While she sang, other protestors representing different religious organizations gathered as part of a Silent Clergy March. Catholic men in black robes and brown sandals kneeled beside the flowers and prayed. Black members of Christian churches across the Twin Cities gathered in a circle and led the Lord’s Prayer, which overtook all other conversation and echoed in the voices of hundreds of kneeled protestors.

Brother Paschal Listi of the Fransiscan Brothers of Peace, a Catholic community of men in the Midway area of St. Paul, pressed his head against the pavement in front of Cup Foods in prayer. He called the movement of diverse religious organizations “unifying justice” and compared George Floyd to Jesus Christ, “who died a similar horrific death.”

“We’re here to build [Jesus’s] kingdom on Earth,” Listi said. “We’re all so broken and in need of healing. We need a different conversion.”

On the other side of the circle of flowers, Bad Moccasin continued to burn sage, having rubbed shoulders with Christians like Listi to do so.

Although she noted that she had “never seen so many people of color and white Americans in the same place,” she felt uneasy around Christians who reminded her of the painful history of her Dakota ancestors. She told stories of the Dakota War of 1862, a period where the Christian faith was forced upon Dakota children in boarding schools

“I passed [Christians at the protest] and said ‘Excuse me,’ but I felt uneasy,” Bad Moccasin said. “It’s hard for me to stand beside people in robes. Trust needs to be earned.”

But her main focus was on the black community, the loss of one of their own, and a system of injustice so familiar to her.

“[I feel] so moved to tears with a heartful prayer and cry to the sacrifice of life,” Bad Moccasin said. “This warrior man, George Floyd, may his name live as a legacy that sparked the life force. A new sacred fire awakens in our hearts to carry forth peace and justice for the black nation, their beloved brother and a greater humanity.”

On the other side of the Mississippi River, at the steps of the Minnesota State Capitol building, thousands protested with a message similar to Bad Moccasin’s.

A group of local high school students organized a peaceful sit-in on the lawn in front of the white marble walls and golden horse statues of the capitol building in St. Paul. Protestors wearing masks to protect themselves from COVID-19 held cardboard signs bearing phrases such as “breathe for justice” and “manifest love.” Others gave away free granola bars and bottled water while a group of black protestors danced to Kendrick Lamar’s “Alright” at the base of the capitol steps.

After everyone took their places on the grass, with no more than a couple feet between each protestor, several black students spoke from the front of the crowd.

“I’m tired of protesting,” a young black woman who wished to remain anonymous said. “I’m tired of stories being swept under the rug.”

A young black man wearing a suit who also wished to remain anonymous asked the crowd “Who’s scared?” A smattering of shouts answered “Yes,” and a lone, booming voice screamed “Every day!”

The speaker said he wore his suit to send a message that it “sucks that [black people] have to dress like this to be heard.” He believes they “should be heard in hoodies and slippers,” and, after naming Philando Castille and George Floyd, two black men killed by police officers in the Twin Cities, he said he was worried that he was “dressing for [his] own funeral.”

Some speakers led chants. They screamed the phrases“Say his name” and “Enough is enough” into a microphone, calling for a response. The thousands of protestors sitting on the grass shouted back.

2 comments on “Cries of faith and justice”