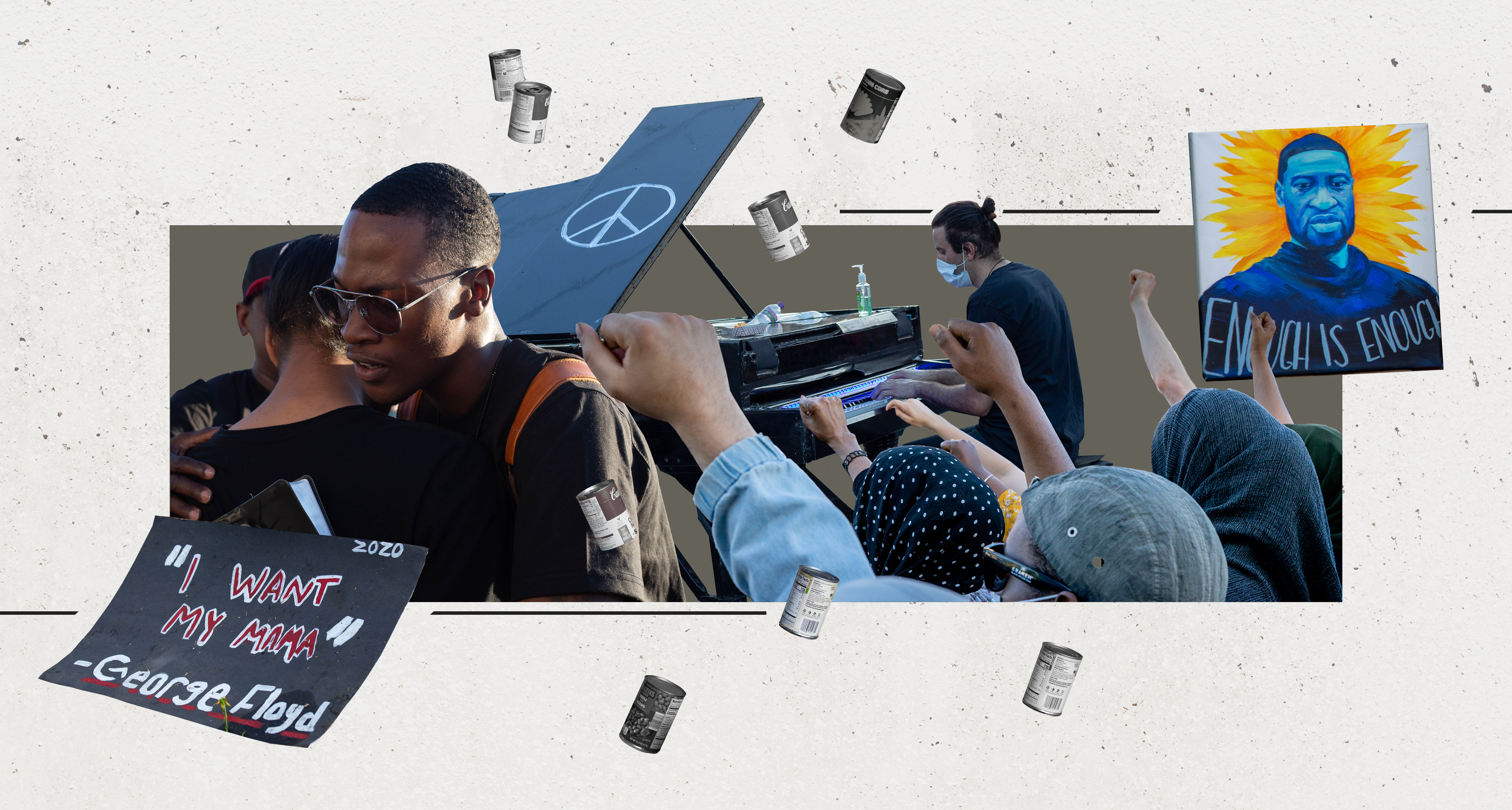 A large banner hung behind a stage that read “The coalition for justice, peace and love” next to the Speedway gas station at Chicago Avenue and 38th Thursday. A young Black woman shared a poem, a Native American man played “Amazing Grace” on a wooden flute and a group of women recited a call for justice in Hindi.

The intersection at 38th street and Chicago remains crowded with protestors after the death of George Floyd more than a week ago. Flowers and signs continue to pile up around the mural, along the street and in a circle at the intersection. Cars clog the surrounding neighborhoods and traffic is blocked from entering two blocks in any direction.

Two women set up a T-shirt making station on the street, letting people design their own shirts in support of the cause. To promote peace, the women duct-taped their mouths in a form of silent protest against the unrest that had occurred days prior.

The Clarion met with a variety of protestors to listen to their stories:

Ira Weatherspoon set up a folding table on Chicago Avenue after the first night of looting in Minneapolis. He recorded a Facebook live video, asking people to donate their time and resources to help support their community during this time of need.

Now, tables line the whole street displaying fresh produce, bagels, “spicy watermelon” and other  goods to hand out, free of charge. When it was rainy, people showed up with canopies to cover the goods. When a table ran out of food, someone dropped off more.

“We keep running out,” Weatherspoon said, “but people keep giving back.”

A protestor approached the table and grabbed a bagel along with a lone banana sitting in a cardboard tray.

“There goes the last one,” Weatherspoon said with a smile.

He also said he needs volunteers to work with the food, pick up trash, patrol at night or direct people where they need to go. A woman named Darlene comes out every day to serve from the tables.

“It’s beautiful to see everyone bring it in,” Darlene said.

Rodrick Williams sat with his father and friend on the street curb when he saw a woman walking by with an unsettling health mask design. The mask was made of black cloth, displaying a face with two Xs for eyes and a red mouth. Williams watched the woman pace the chalk-covered street a few times, seemingly unnoticed by other protestors.

Williams approached the woman himself and asked her to explain what her mask stood for. The woman told him she wasn’t sure but a friend had given it to her the day before. William told her to take it off.

”What does that look like to you?” he  said to her. “That doesn’t look like black face to you?”

The woman started shaking and told Williams that she hadn’t realized that. Williams saw the woman throw away the mask, but he took it from the garbage after she left. The mask serves as a reminder that, even at a protest, people should be on the lookout. He said it’s important to recognize “simple hatred.”

”You could be out here fighting for us, fighting for a good cause, fighting for peace and equality for everybody, but if you’re naive enough to walk in here with this [mask], that’s not helping,” Williams said.

Williams and his dad flew into Minneapolis from Texas to visit the George Floyd memorial and to observe the protests for themselves. Williams graduated from the University of Minnesota in 2015 and started his own business: Bald Head Bakery. On Saturday at a black business appreciation event, Williams will be handing out Rice Krispie treats to protestors.

Williams adjusted his custom Bald Head Bakery face mask and put the woman’s mask back in his pocket.

”For people who are naive to the situation, you need to be taking notes, you need to be having a conversation with people all the time,” Williams said. “If you’re not doing that here, you can say you’re for the cause but you’re really just out here blind.”

Emad gripped a black bible, kneeling on the ground as he placed his arms around two protestors and prayed for them. He came to Minneapolis with Adam from Miami, Florida, and Davonte from Atlanta, Georgia. The three men are a part of a gospel-centered movement they call “Kingdom Bizness.”

“Jesus,” Emad shouted, pumping a fist in the air as protestors strolled by.

Emad said he sold drugs before he “came to the Lord” Feb. 2, 2014.  Police had come to Emad’s home in search of drugs. Thinking he was being robbed, Emad was about to run, which he said would’ve given the police reason to act. However, he didn’t move when he heard God tell him “Don’t run.”

“I praise God that I listened to his Holy Ghost,” Emad said. “Every chain can be broken… through Jesus Christ. He broke every chain for me.”

Davonte started the movement in 2019 after the Lord called out to him. He was walking down the street “heading for trouble” when it happened, an event he compares to Paul on the road to Damascus.

“I wasn’t looking to change my life, I wasn’t even looking for the lord when he found me,” Davonte said.

The movement began with a hashtag, Davonte said: #kingdombizness. The mission of the movement is to not “hide in the church” but to actually go out into the communities and engage them with the gospel.  Davonte and his team have been traveling around the country,  city  to city, spreading the word in places where “people don’t want to go.”

The three men plan to stay in Minneapolis until Monday, when they plan to keep moving. Davonte said he remains hopeful that the people he met in Minneapolis really have a “heart for change” and justice.

“I understand everything that’s going on but in the midst of all this, they have to bring Jesus Christ into it,” Emad  said. “He is the prince of peace. If this neighborhood wants to see peace, they’ve got to go to the source: Jesus Christ.”

The melodic chords of Stevie Wonder’s “Love’s in Need of Love Today” resonate down Chicago Avenue as protestors sat and stood in a circle around a baby grand piano. German traveling pianist Davide Martello moved his fingers nimbly over the keys, playing the tune perfectly despite saying he only heard 30 seconds of the song for the first time minutes before.

“I feel this overwhelming sense of serenity just to hear these beautiful, melodic sounds resonating through the street right now,” Weatherspoon said after he had suggested the song. “It really helps give you that sense of hope again, that warm feeling that things are going to be okay. This is incredible.”

Martello came to the United States to perform in March, but due to the coronavirus restrictions on international travel, he had to stay. After four attempts to book a flight home, Martello finally got a plane ticket to Germany through American Airlines to fly out June 5. But instead of taking that flight, he packed up his piano where he was staying in Oklahoma and drove 12 hours to Minneapolis.

“I saw the violence… and I wanted to shift it to the positive, make something beautiful out of the misery,” Martello said. “Because of this, it felt so wrong to go back to Germany.”

Martello squirts hand sanitizer to wet his piano pedal as he prepares for his next song. A sign is attached to the side with blue tape reading “I can’t breath” and a peace sign decorated the top. In the past, Martello said he’s played during other protests to promote a peaceful atmosphere.

Martello plans to keep playing, whether it be here in Minneapolis or in the streets of Washington D.C.

“This is my contribution…, it’s pretty simple,” Martello said. I know it’s a pretty hard time right now…, but there is an end to it.”

At 8:55 p.m, Martello shut the lid of his metal piano on wheels and hopped on the motorized bike attached to the front. Martello said goodbye to his admirers and pedaled off down the street.

As the sun set and the 10 p.m. curfew drew near, the crowd lessoned only slightly. A large crowd was still gathered before the stage, fists in the air.

Again and again, protestors were called to “say his name.”

“George Floyd!” they said in unison.

Some last names were not included for privacy purposes.