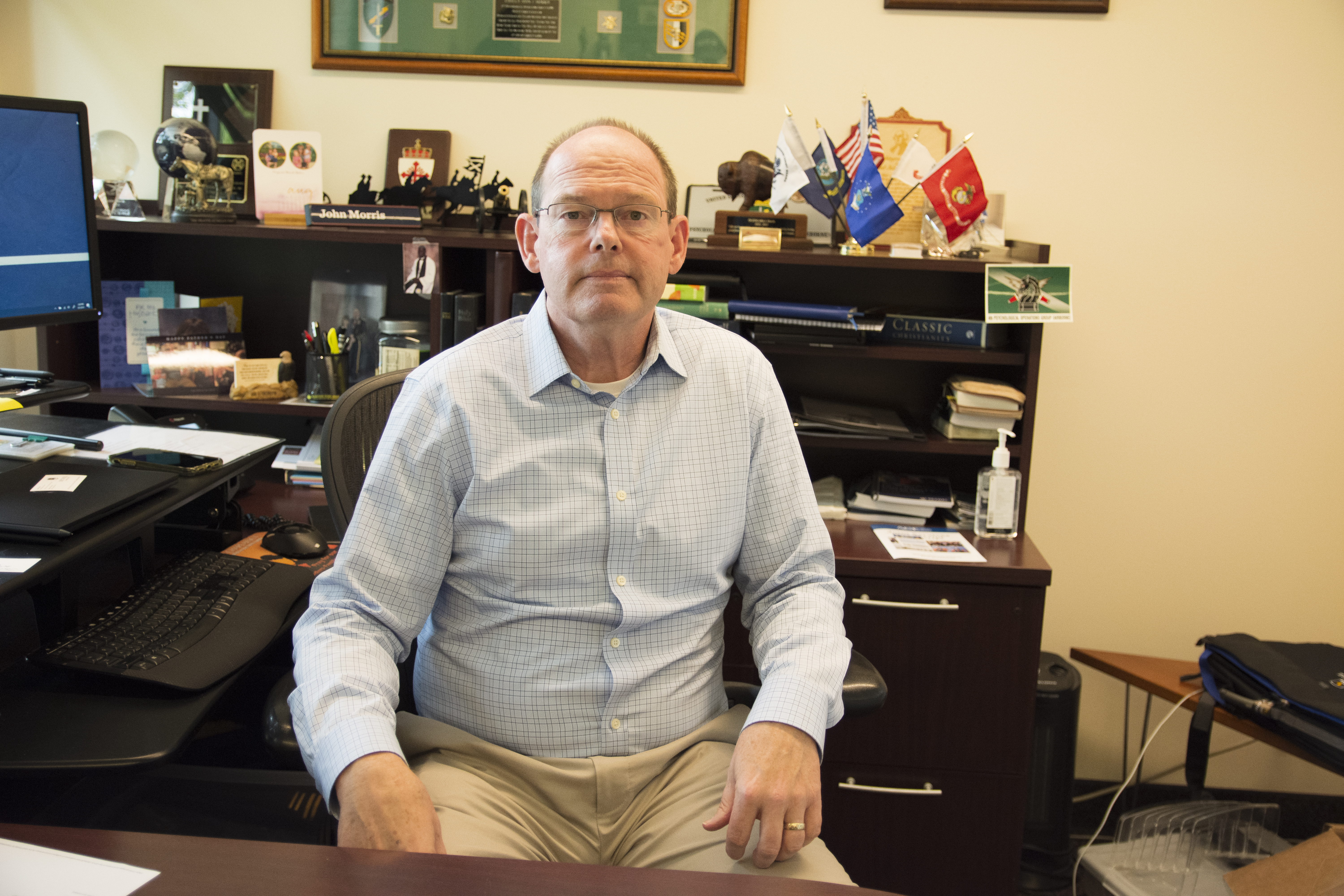 Three individuals from Bethel who previously served in the Middle East respond to the Washington Post’s coverage of the release of the Afghanistan Papers.

By Jessica Trowell and Jasmine Johnson

When John Morris accepted the position as Bethel’s Executive Director of the Office of Military and Veteran Services in 2019, that opened a new chapter in his career. While Morris gets busy helping military students transition into college life, one question keeps emerging about the chapter he has left behind – more than 20 years of military service in the Army National Guard during which he served three tours of duty as chaplain in the Middle East. He said he wondered about why the United States got entangled in the longest war in U.S. history. Morris said his fear was confirmed when the Washington Post published the Afghanistan Papers in 2019.

“I was extremely upset when I read the [Afghanistan] Papers, and at the same time it confirmed what I had already thought was true,” Morris said. “And I was sad about that. Sad and angry.”

The Afghanistan Papers, a six-part series published by the Washington Post about what went wrong during the longest armed conflict in U.S. history. The Post, after a three-year legal battle, won release of more than 2,000 pages of “Lesson Learned” interviews with 400 people, including generals, ambassadors, diplomats and others directly involved in the war efforts.

“In hundreds of confidential interviews that constitute a secret history of the war, U.S. and allied officials admitted they veered off in a direction that had little to do with al-Qaeda or 9/11,” the Washington Post reported. “By expanding the original mission, they said they adopted fatally flawed warfighting strategies based on misguided assumptions about a country they did not understand. The result: an unwinnable conflict with no easy way out.”

Morris enlisted in the Army National Guard after graduating from Bethel Seminary in 1986. After serving in the military for more than 20 years to train chaplains, he retired in 2018 and then joined Bethel to recruit military students. He said one quote from General Douglas Lute included in the Washington Post series summarized his own thoughts.

“If the American people knew the magnitude of this dysfunction – 2,400 lives lost – who will say this was in vain?” Lute asked.

Morris compared the U.S. policy in Afghanistan to its policy in Iraq, where he served three tours of duty.

“I was extremely upset when I read the [Afghanistan] Papers, and at the same time it confirmed what I had already thought was true. And I was sad about that. Sad and angry.” – John Morris

Morris was stationed in Iraq in the early 2000s. His troops were trying to impose democracy on people who didn’t want it and weren’t prepared for it. The unintended result was chaos and mass corruption in society. He said the U.S. troops went from being “liberators to hated occupiers.”

“My observation as a chaplain was that it was wearing on our souls because no American signs up to serve their country to be hated by people,” Morris said.

Another Afghanistan veteran and Bethel student echoed Morris’s opinion. This student requested to remain anonymous to protect his privacy. He said he felt unprepared for engaging with locals and working toward establishing a democracy.

“No matter what information we gave them, it was based off our opinions and what we know as Americans and our way of life,” the Afghanistan veteran said. “It was very difficult to truly understand where they were coming from and how they are as a nation and their own customs [and] traditions. And so as we’re giving them all these ideas in how to do it, we just wouldn’t know if it was acceptable or if it was going to work.”

The U.S. tried and failed to make a democratic government in Kabul. The U.S. government was pouring in around $3 million every day to areas in Afghanistan for nation building, according to the Washington Post.

U.S. generals arriving in the capital of Kabul would visit government buildings and be shown the best-trained soldiers. Bethel nursing student and Afghanistan war veteran Luke Marshall explained the reality of the situation from his eyes: Afghan soldiers in training weren’t as effective as U.S. troops, and the facade Kabul put out to the public would crumble if the U.S. pulled out of the country. Pulling out would mean wasting a large part of the U.S. strategy and money.

Marshall said they saw a head insurgent coming from a village killing but couldn’t do anything because they were playing defense—what he calls being in “the middle.” They also had to keep eyes on an insurgent for a certain amount of time before shooting back. Marshall described the U.S. troops as responding to the war, not conducting it.

There were always different reasons for why Afghanistan’s or the U.S. death toll was increasing, but the messages communicated from the U.S. generals all seemed to point in a positive direction, according to Washington Post.

“The Afghan forces are better than we thought they were,” Marine General John Allen said to Congress in 2012.

The U.S. strategy of training the Afghan soldiers and security “looks good on paper,” Marshall said. He agreed that the U.S. was winning at times. Insurgencies were found and eliminated. Roads were built. Afghans were trained. But like anything, he said the war had its ups and downs.

Marshall patrolled alongside the Afghan soldiers, whom the U.S. soldiers trained on their own time without being ordered to do so. Their goal, Marshall said, was to empower the Afghan army so they could one day do counterinsurgency on their own. The Afghan volunteers brought their own weapons and were paid 15 U.S. dollars per day.

Marshall recalled some of the Afghans running away during times of conflict. While returning to the base from patrol one night, the Afghan soldier on guard duty thought Marshall was an insurgent and began shooting at him.

“I don’t know the political goals or the exact orders we were doing to make that happen, but they weren’t working in the region I was, and there was no attempt to fix that,” Marshall said. “It was just, ‘Keep doing this thing that we have written down.’”

Moving forward and drawing out

The U.S. signed a peace agreement with the Taliban, who are the principal opponents of the United States. In exchange for reducing troops in Afghanistan, the U.S. asked Afghanistan to return prisoners to the Taliban and sever ties with al-Qaeda and other terrorist groups.

The agreement, signed in Doha, Qatar, is not a final peace deal, but it is seen as a move forward that could eventually end the insurgency of the Taliban.

The U.S conducted an airstrike after the peace agreement was signed in February. The Taliban had continued to attack Afghan troops, killing innocent civilians and troops, and have not been upholding their commitments based on the agreement.

“I don’t know the political goals or the exact orders we were doing to make that happen, but they weren’t working in the region I was, and there was no attempt to fix that. It was just, ‘Keep doing this thing that we have written down.’” – Luke Marshall

The U.S. accelerated pulling soldiers outside of Afghanistan since the rise of COVID-19 because the virus has run rampant in Iran, a neighboring country. The U.S agreed to reduce its

number of troops from 12,000 to 8,600 in 135 days, and eventually withdraw all troops within 14 months if both parties uphold the deal, according to a February New York Times report.

“Is [pulling out troops] the right thing to do?” Morris asked. “Yes, in the long run, but are we leaving the right way? No, we are probably leaving too fast.”

Morris said this quick withdrawal of U.S. military forces might cause more chaos and suffering for the innocent, but there’s no other option because U.S. officials have been pouring out too much money.

One soldier at a time

Even through the nearly two-decade war, Morris said there are a few things the U.S. should be proud of: giving women the opportunity to get an education and making progress through other humanitarian efforts in agriculture, water, roads and medicine.

As a chaplain, Morris lived, trained, and deployed to combat with his soldiers. During combat, he worked alongside medical personnel. Morris also interacted with the Iraqi religious leaders, which was true for chaplains in Afghanistan as well. His goal was to try to build relationships with them to mitigate the impact of combat.

What Morris is doing at Bethel now is somewhat similar, that is, to mitigate the impact of military service on veteran students’ transition into life as college students at Bethel. Morris said it takes one-on-one work with these military students to help integrate them into society and equip them with the skills to go on and be successful.

0 comments on “A response to the Afghanistan Papers”