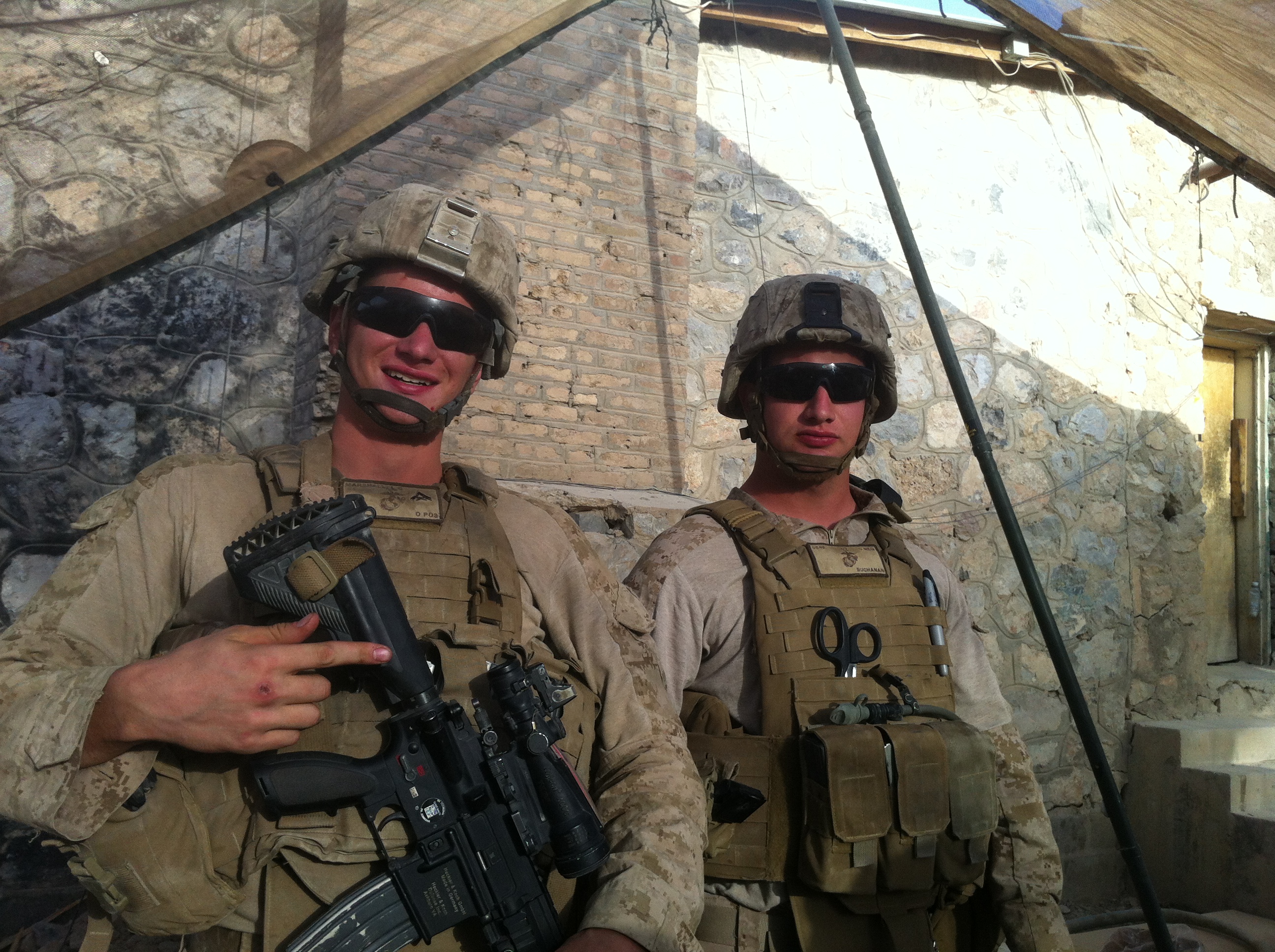 Luke Marshall first heard of war when his teacher wheeled in a TV to watch the second plane crash into the World Trade Center. The moment stuck with him along with a fourth-grade history report on the Battle of Belleau Wood during World War I. It was then he fell in love with the Marine Corps, a branch of the U.S. Armed Forces trained for land, sea, and air combat. Then came junior high and high school, and he still couldn’t let go of the feeling that he was supposed to join the military.

“I’ve always been everyone’s unofficial big brother,” Marshall said. “The idea of being the one who says, ‘To get to the person behind me, you’ll have to come through me. I’m not gonna let you hurt these people.’ I was able to do that in Afghanistan, and I’m very happy about that.”

That sense of wanting to be there as a big brother when someone is hurting brought him to choose nursing as a career after his military service. He said attending Bethel has been a “very, very good thing.” He also said that his combat experience in the battle fields has helped him to become a better nurse.

Fighting with more than weapons

Marshall decided to join the infantry, a part of the Marine Corps that travels by foot to combat, but it took half a year after graduating high school for him to enlist. He said he needed time to find peace with the realization that he could die.

Marshall graduated boot camp December 2012 at the Marine Corps Depot San Diego before stationed at Twentynine Palms, California. In 2013, he was deployed to Afghanistan, arriving at Camp Leatherneck where he was introduced to temperatures reaching 140 degrees and no air conditioning. Each marine in his platoon carried 60 pounds of gear and a backpack that weighed another 60 pounds. He was moved once more to Fort Zeebrugge in Kajaki, Afghanistan, where 200 marines were awakened the first night by mortar tubes shot at the base. The alarms sent them to the safety of armored trucks.

“I was kind of pissed off that they had interrupted my sleep,” Marshall said. “Once I got more rest, I realized I could have died that night.”

His platoon was in charge of patrolling Highway 611 and scanning the desert for dirt settlements where buried improvised explosive devices (IEDs) lay waiting for patrol vehicles to drive over. Marshall also shot back at insurgents, the anti-government Afghans, whom the U.S. military was fighting against.

“Sometimes we would get a heads up of a bomb maker, and we would kick down his door and let him have a bad day,” he said.

Marshall’s time was split between carrying out raids and providing first aid to locals caught in the midst of the war.

Many children who had played too close to a land mine were brought to their care because the nearest hospital was hours away. Marshall remembered an 11-year-old whose chest was injured from shrapnel.

He doesn’t know what happened to the kid, but this moment led him to consider pursuing a career in the medical field.

“I wanted to be able to do more, there wasn’t more I could do because I wasn’t trained to do more,” Marshall said.

The Afghan kids doted on the marine who packed his empty magazine pouch with butterscotches his mom sent him, candies that wouldn’t melt in 140-degree heat. Marshall said the Afghan kids showed their love in different ways, such as throwing rocks at the patrol vehicles that drove past. One kid could’ve been recruited by a baseball league, as his throw was fast enough to spider-web crack the bulletproof window.

“You couldn’t drop your guard entirely because up the road a couple hours, there was a kid throwing hand grenades at some of the marines,” Marshall said.

They entered villages for hearts and minds, meetings with the villagers to “win over the locals” and explain why they were there — something Marshall didn’t quite understand himself.

He said sometimes he felt he was caught in the middle, not knowing the mission the U.S. military was trying to accomplish.

“We would see a head insurgent that just came from a village killing,” Marshall said. “We would know where they were. We could see him, and we weren’t allowed to do anything. I would count that as being in the middle. We weren’t conducting actual war against anyone.”

Instead, the marines trained Afghan security forces patrol and counter insurgency combat. Marshall said the presence of the U.S. military allowed schools to be opened and women to be educated.

“If you treat them like they’ve got a hand grenade, it makes them more likely to have it,” Marshall said. “You have to treat them lovingly and with respect because that’s a weapon, too. That’s the better kind of weapon.”

Marshall walked into Adam Johnson’s Introduction to Statistics in 2017, his first class at Bethel University. A cane helped Marshall walk after having an ACL/PCL tear during his time with the Marine Corps. He noticed Johnson had a cane, too.

Marshall loved the class with his cane buddy because he appreciated Johnson’s dark humor. Both were confronted with a stark reality: death. They shared long conversations in Johnson’s office about their experiences: Marshall’s time in Afghanistan and Johnson’s cancer.

“It was great,” Marshall said. “It was exactly my flavor.”

Marshall moved to Minnesota in 2016 and attended St. Paul College to fulfill his generals before starting nursing school. He landed in Bethel because he liked the people, atmosphere and the nursing lab.

Instead of simulation dummies, Marshall practiced giving IVs on other soldiers during his days in Afghanistan.

“I got scar tissue from getting stuck by my buddy who’s like ‘Did I get it?’ ‘No you didn’t get it.’” Marshall said. “We had bags and bags of normal saline so we could just stick each other all day long.”

Now a junior at Bethel, he walks alone down the quiet halls lit with a buzz of conversation and familiarity, a contrast to the IEDs, mine explosions and rapid gun fire filling the Afghan air. Surrounding him, students stress over essays and exams, things that don’t give him the same anxiety as riding down desert highways in an armored convoy searching for hidden IEDs and landmines.

Julie De Haan, nursing professor, met Marshall in her inquiry seminar course called Sleep: What’s the Big Deal? He was the first one to show up to the 1 p.m. class. One day when De Haan lost her ID somewhere along the path from her office to the class, Marshall got up without asking and searched for it like on a mission. He found it tucked in a corner.

As a nursing student who gave an 11-year-old boy a needle decompression after an IED explosion shot shrapnel into his chest, Marshall brings a unique experience to the nursing classroom. De Haan said the stories he connects with the lessons allows him to understand the material. A future in a high adrenaline setting is what she sees for his future as a nurse.

“He thrives on action, he thrives on doing and I think he would do best in that kind of situation,” De Haan said.

Marshall still looks back to those days in Afghanistan. He said he didn’t regret his choice to serve in the Marines. He went so others didn’t have to.

Although Marshall’s experiences set him apart from other Bethel students, he doesn’t want Afghanistan War veteran to be his sole identity. It took an unexpected encounter with John Morris, Director of the Office of Military and Veteran Services, to launch him on the journey of feeling understood.

Marshall said he ignored Morris’ email and the posters hanging above the Brushaber Commons with messages of connecting with military students. One day, while waiting for textbooks in the campus store, Marshall spotted Morris approaching. Marshall said he wanted to get out of it but couldn’t because he needed his textbooks.

Now Marshall says it’s “exactly what I needed.” Marshall and Morris bonded over their shared experiences, Marshall in Afghanistan and Morris in Iraq. They both wore buddy bracelets for fallen military friends. They shared stories over coffee made from the Keurig machine in Morris’ office.

“His office is a place where I don’t have to be an outsider,” Marshall said. “He’s the best chaplain I’ve ever met.”

Two men, who didn’t want their identities to be Iraq or Afghanistan war veterans, know moving forward to them means looking forward.

“When you’re a veteran coming to Bethel, you’re trying to move on in life,” Morris said.

Morris sees the way Marshall still lives on a mission. Like the time he fixed the door handle of the Office of Military and Veteran Services without being asked, realizing the room wasn’t secure with it broken.

“He saw there’s a mission that needs to be done and went out and did it,” Morris said. “That’s the kind of guy you want to have as your nurse.”