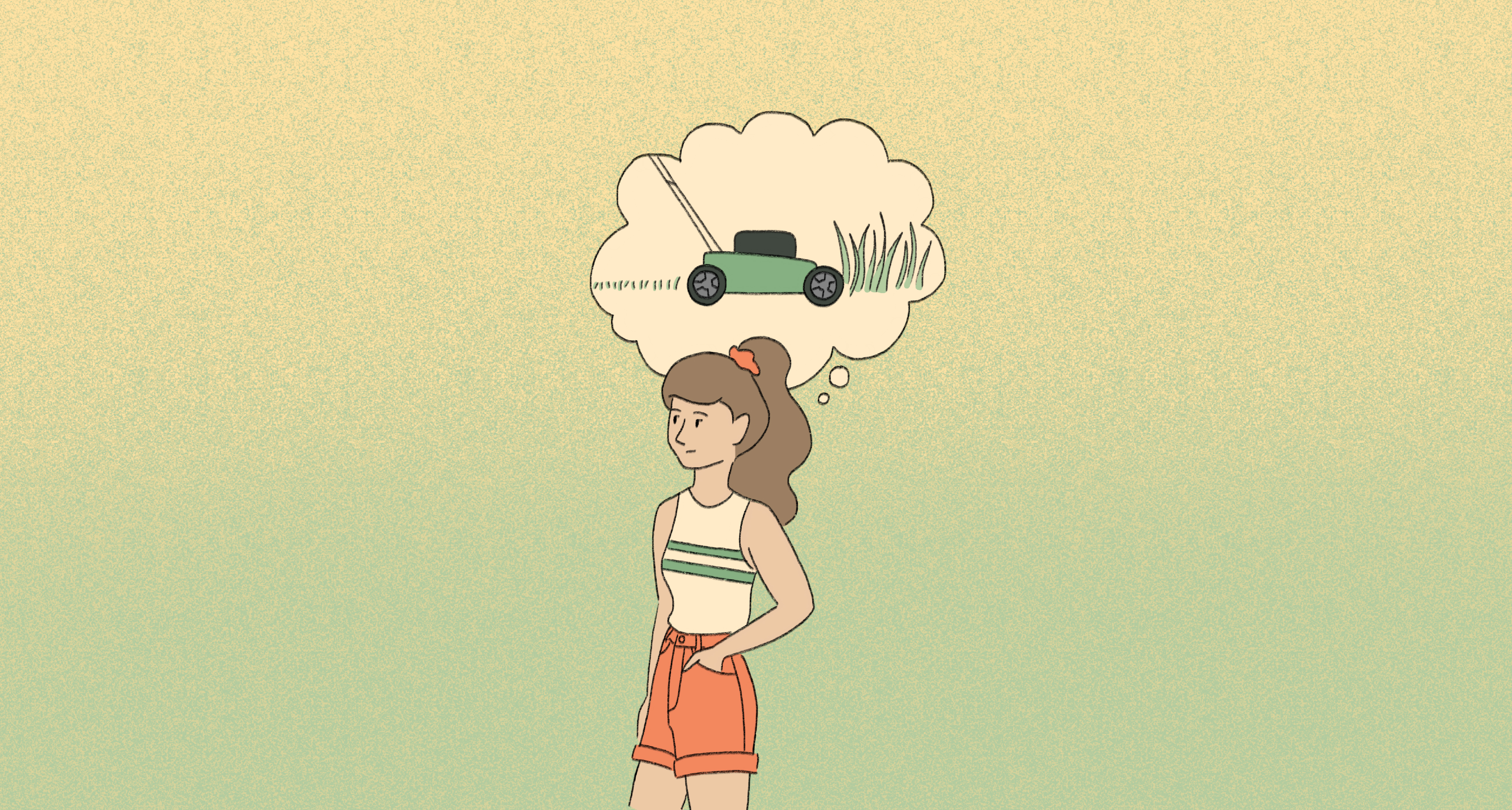 I spent most of my childhood watching Barbie movies and asking my dad to kill the spiders on my ceiling. He’d give the inevitable huff, the ‘Really, Em?’ and roll his eyes, but he’d usually do it if I asked nicely. In my head, there were certain things only a big, strong man could do.

Things like unclogging the shower drain or flipping burgers on the grill, like starting a bonfire or selling things on Craigslist or assembling furniture from IKEA.

But these are the things you need to learn how to do when the big, strong man in your house moves out. You have to become the big, strong man, because the grass doesn’t stop growing and the drains don’t stay unclogged and the spiders are always spinning new webs.

My dad tried to teach me how to throw a football on Centerville Beach when I was 11.

Before that he’d pointed proudly at 1980s newspaper clippings from when he played high school football in Amery, Wisconsin, pasted into a worn blue scrapbook: Harville provided two of the most exciting plays of the Amery season. And he has worked hard for his success – He bench presses more than 300 pounds and is a success scholastically!

Standing on the beach and holding the football in my toothpick arms, I’d really just wanted to sit in the sun and read Percy Jackson books until my shoulders turned pink.

“You put your fingers on the laces and put a spin on it,” he said. “Like this.”

Then he’d throw the ball toward me in a perfect spiral and I’d stand, arms wide as it sailed overhead and pounded into my fingertips, chipping my blue nail polish before it tumbled into the sand.

Other big, strong men always said “Oh, poor Bob” with a sad chuckle when they found out my dad has four daughters. They’d give him a playful slug in the shoulder and say, “So you’ve really got your hands full!”

I hated that. I know I can do anything a big, strong man can do. Even though I still watch Barbie movies with my sisters sometimes and I’m too scared to kill a spider, I know I can be strong if I want to be.

Growing up, my dad and I were the only early risers in the house. I would come down the stairs at 6 a.m. rubbing my blurry eyes, and he would be sitting in his blue leather recliner holding a can of Diet Pepsi and the sports section of the Star Tribune.

He’d almost always say “Hi, Em” when I walked past him toward the kitchen, but after that I’d just eat my toast in silence as I flipped through the Sunday comics.

That’s not a memory I look back on as being particularly good or bad. It was just the mundane reality. But now when I walk down those stairs every morning, it’s just me and my mug of coffee.

I tossed around that same football with my dad the other night in Upper Landing Park, near the St. Paul apartment he moved into six months ago.

Fingers on the laces… and… spin.

“There you go!” My dad had such a silly grin on his face, the kind of joy that only a big, strong man could feel when his daughter finally learns how to throw a football.

When the sun started to set, my sisters and I sang old Jonas Brothers songs as we walked along the Mississippi back to his apartment. My dad walked five steps behind, the football cradled in his left arm.

Maybe my dad would have liked a son. Someone he could relive his hometown glory days through and cheer on all the way to state. Someone who would play with his old Matchbox cars and wouldn’t stare at him blankly when he asks for a masonry drill bit.

But maybe there’s joy in teaching your skinny 11-year-old daughter how to throw a football as she tries to teach you how to french braid. If I ever have a daughter, I think I’ll teach her how to mow the lawn. And who knows? Maybe by then, I can kill the spiders for her, too.