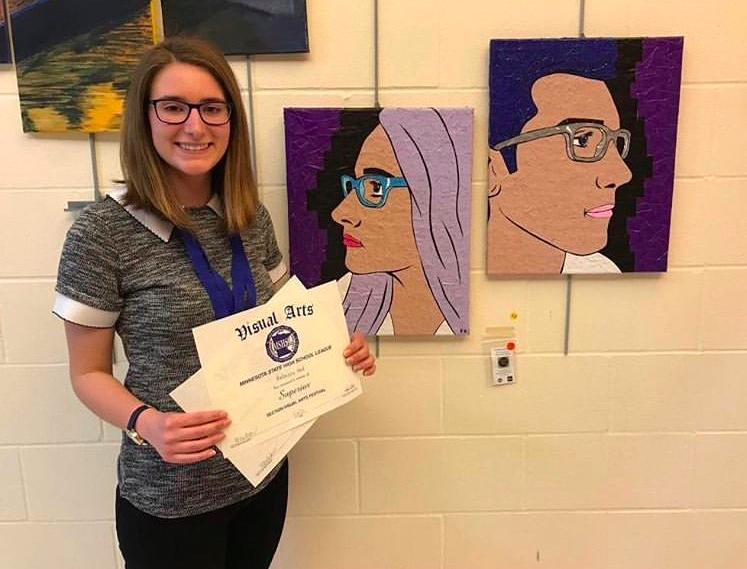 The Clarion searches the deep in the trenches of Instagram to discover unique student creators.

By Rachel Blood and Thanh Nguyen

Q: What year are you in and what are you studying at Bethel?

A: This fall I will be entering into my senior year at Bethel. I will graduate with a Fine Arts major and a minor and business.

Q: When did you start creating duct tape art? What (or who) inspired it?

A: I started making art out of duct tape in middle school when it became popular amongst my classmates. I remember standing in the hallways in between class talking with other kids about the latest flower or wallet we had made over the weekend. The first thing I ever made was a red and green wallet at my friends house. My friend’s sister was making a duct tape wallet, so she let me join her — I also still have the wallet I made that day. As I began to make things out of duct tape other than wallets and flowers, I found inspiration in Pop Art artists, such as Roy Lictenstein, as well as in the mosaic designs of Antoni Gaudi.

Q: Out of everything you’ve created, do you have any personal favorites?

A: One of my personal favorites I have made is called, “Together or Apart?” I made a self portrait on one canvas and a portrait of my brother on another, who is looking in the opposite direction from mine. It got its name from being able to rearrange the canvases so that my brother and I are either looking at each other or looking away from each other.

I made “Together or Apart?” for my college-level drawing class my senior year of high school. Our assignment was to create a self portrait. I think everyone was surprised that I showed up to a drawing critique with a duct tape art piece. It was definitely worth it, though– my self portrait was chosen to be shown in Washington DC for a year.

Q: What has been your biggest accomplishment as an artist?

A: I have two accomplishments that I think are tied for my biggest accomplishment. The first is that I received the Live Mas Scholarship through the Taco Bell Foundation in 2018 and have been a part of the Renewal program for the last two years. When I was first chosen for the scholarship, over 7,000 students applied from across the United States. I still cannot believe that I was a part of the 100 students who received the scholarship!

My second big accomplishment is that I had a duct tape self portrait shown in the Minnesota State Fair’s Fine Arts Juried Exhibition in 2019. I started entering my art into the State Fair’s education building when I was middle school. Growing up, I would walk through the Fine Arts building hoping that I would be able to show my art there once I was old enough to and had aged-out of the education building. It was awesome to be able to accomplish a goal I had given myself when I was young.

Q: How long does your average piece of artwork take to create?

A: It definitely depends on the piece. I would say that it takes me anywhere between one week and a month depending on how much free time I have to create.

Q: One of your trademarks is creating art out of three spoke wheels. Where did this idea come from?

A: My parents started a company together called Hed Cycling Products over 25 years ago. My mom ran the business while my dad invented the new product. One of the products that my dad made was the three spoke bike wheel, which is a bike wheel used while racing in triathlons and time trials. My dad died unexpectedly in 2014. So, after his death, I began using the three spoke as my canvas. It’s one of the ways I choose to keep his legacy alive.

I use duct tape to cover the wheel and create unique mosaic patterns out of it. To make the finished art wheel even more unique, I add a wall mount to it, so it can spin on the wall.