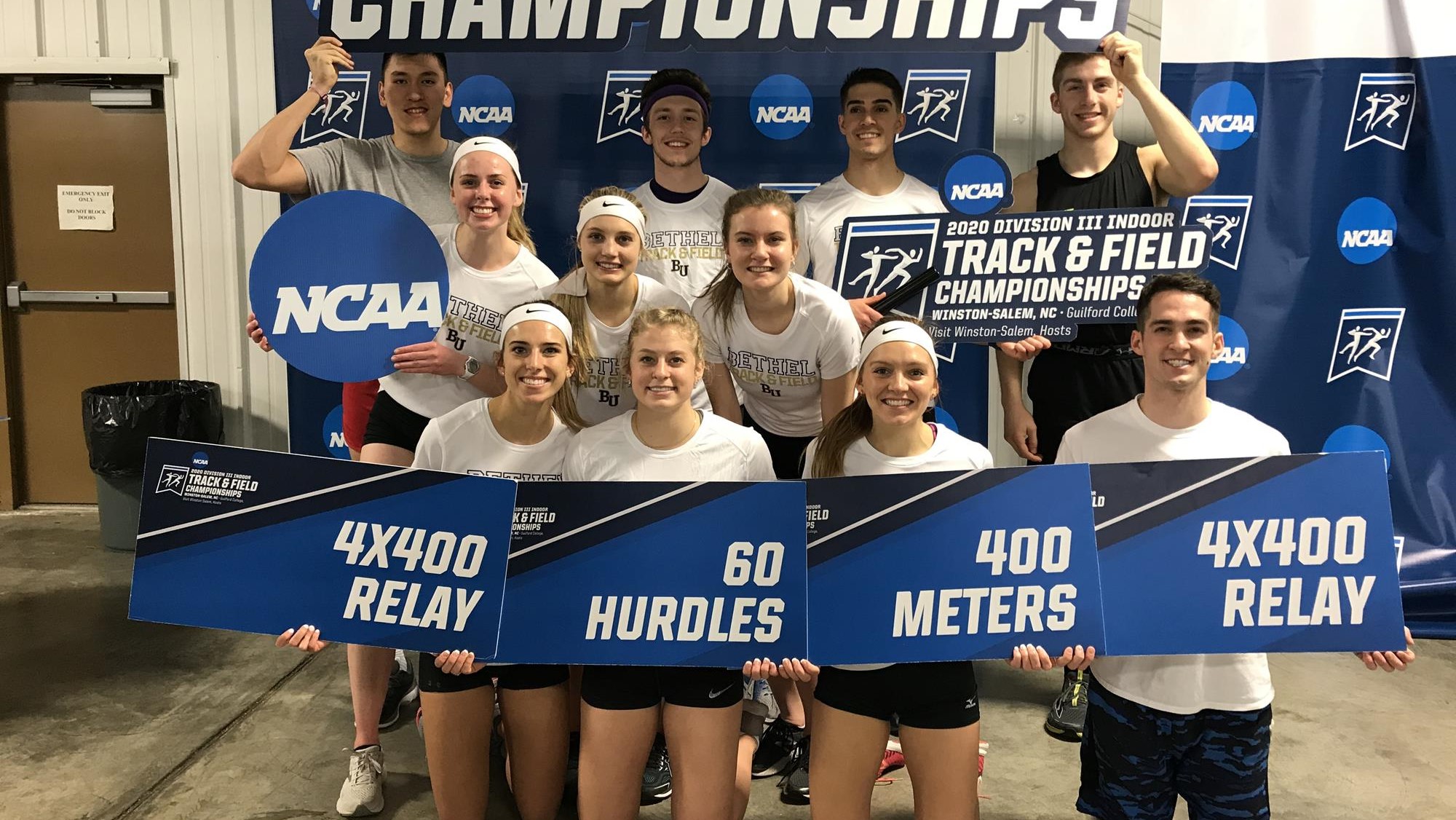 Four track seniors reflect on a shortened Track and Field season due to coronavirus.

The Bethel track and field team had eleven competitors qualify for the Indoor National Championship last spring. Shortly after touching down in Raleigh, North Carolina, the team was informed that the competition was canceled due to the coronavirus pandemic.

“It was shocking to say the least… when less than 24 hours before our first event, it got cancelled,” Delia Labatt, a biokinetics major, said.

To qualify for the national team, a competitor must rank in the top twenty in the nation for their event. Of the thirteen seniors on the track team, four were able to compete. Isaac Erickson, a biblical a theological studies major, and Shawn Monroe a missional ministries major, qualified for the men’s 4x400m, while Labatt and nursing major Corin McKinstery qualified for the women’s 4x400m. Labatt also qualified individually for the 400m sprint. Seven other underclassmen also made it to the national meet this season.

“To not be able to see them get the remaining opportunities was difficult,” Head Track and Field Coach Andrew Rock said. “In saying that, I am so proud of how the team walked through the disappointment together and kept relying on their faith.”

On Thursday, March 12th, after hearing of the cancellation of not just nationals but the rest of the season, the team had a few days to spend together in North Carolina before being sent home. They grabbed a couple of beach days and enjoyed each other’s company while processing that these were their last moments on the team.

“It was too short of a plane ride,” Erickson said. “I wish it would’ve been longer.”

All four seniors have competed at nationals with each other in past seasons. Last spring at the NCAA Indoor Championships, Labatt and McKinstery took third in the meet for the 4×400 event.  Monroe and Erickson took fifth in their 4×400 race at the championships.

Though relays involve teamwork, events like Labatt’s 400m sprint are run alone. However, Labatt said that even in these events, she still relies on her teammates.

“We’ve kind of been doing it together since freshman year,” Labatt said. “I’ve always been really close with the nationals group. The only part that’s individual is the time when you’re on the track, running your race alone. But everything else, all the training, all the mental prep, you couldn’t do any of that alone.” Labatt said.

None of these four plan to return to the team next spring, despite the NCAA offering an extra year of eligibility to all athletes who had their seasons cut short by the coronavirus. All of these runners already have post graduation plans in place that won’t allow them to continue on the team. Still, they’re able to pull out pieces of the team they’ll take with them into their future endeavors.

Monroe and Labatt plan on staying in the Minneapolis area to work. Monroe is with nonprofit organization Treehouse, while Labatt will spend the fall as a medical scribe with hopes of applying to a physcian’s assistant program next spring. Erickson and McKinstery both plan on moving out of state; Erickson for seminary school in Nebraska, and McKinstry to work as a nurse in Ohio.

In spite of the unexpected and unconventional ending to their careers, these seniors left their mark on the Bethel Track and Field program, Rock said.

“They are some of the most successful athletes we have had in our program…this year’s team was a very special group and they have a lot to be proud of,” Rock said.

0 comments on “The Last Lap”