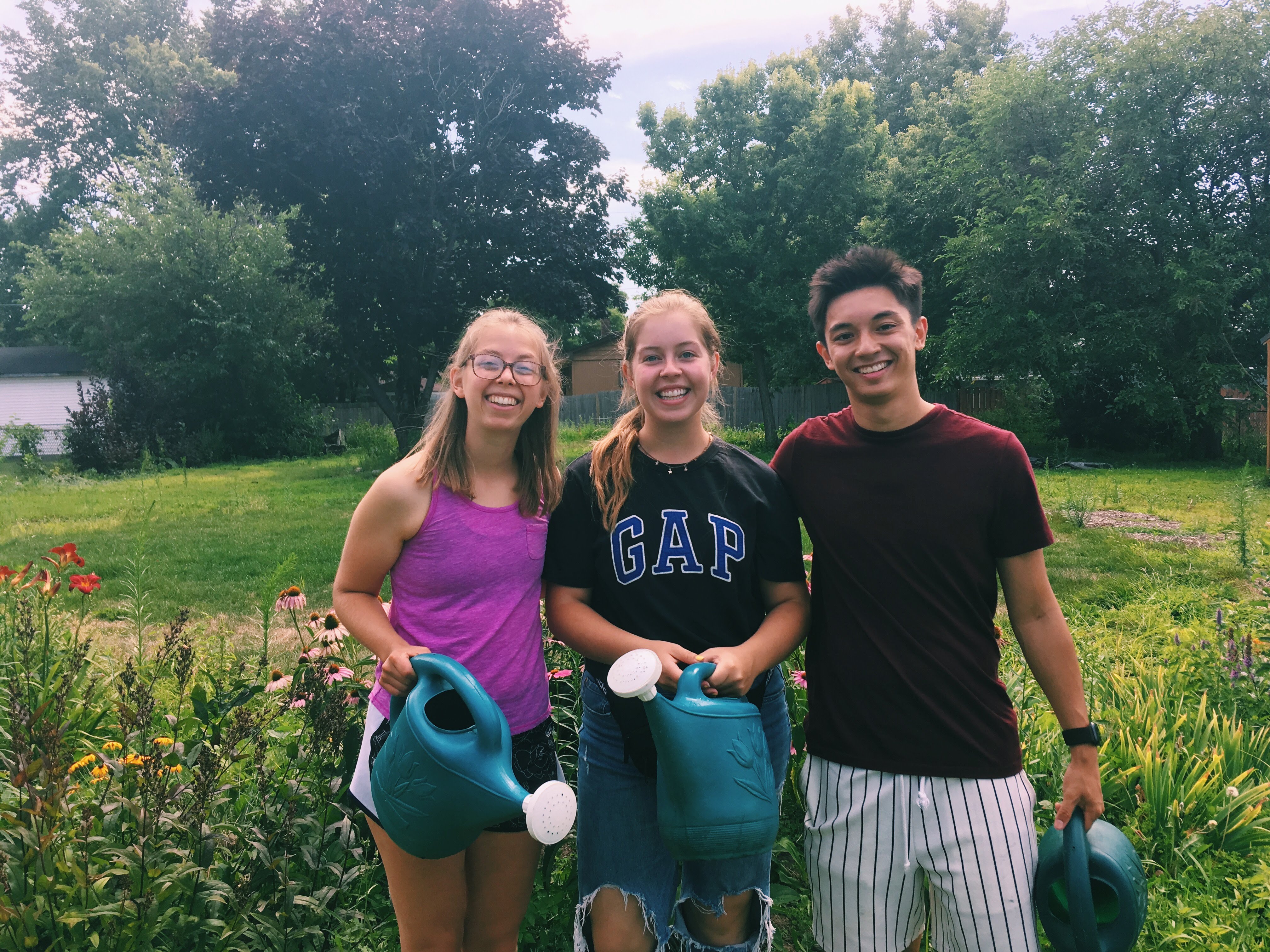 Lizzy Carson, Bethel University sophomore nursing major and reconciliation minor, was recently named a 2020 Newman Civic Fellow for her community engagement on Bethel’s campus and in the broader community. Carson spent last summer working with the Urban Farm and Garden Alliance in St. Paul. UFGA is a group that seeks to promote reconciliation, peace and justice through cultivating and sharing food in the Summit-University and Frogtown communities.

“I think I learned how important it is in my job as a reconciler, specifically talking about racial reconciliation, to take time to unpack the implications of privilege and whiteness with those who identify as European Americans,” Carson said.

During the 2019-2020 school year she served on Bethel’s campus as the Director of European Americans in Solidarity in addition to her role as a Resident Assistant. This coming summer Carson plans to work with UFGA again to continue learning about and working toward reconciliation in the FSU community.

For over 20 years, students at Bethel have been partnering with the Frogtown-Summit University (FSU) neighborhood through what is known as the Bethel FSU Partnership. Through this partnership, students engage with FSU community members and take part in various service-learning opportunities.

Within the last five years, the partnership has seen immense growth in regard to Bethel student participation. The number of students involved jumped from around 150 in the 2014-2015 school year to more than 400 in the 2018-2019 school year.

A large part of this growth has to do with Tanden Brekke, the Assistant Director of Community Engagement and Service-Learning, who has been in the role for almost five years. He said that years of building  relationships with the neighborhood and with Bethel before stepping into this position has helped him grow the partnership.

“With the social connections came trust,” Brekke said. “Community organizations knew who I was and when I said ‘here’s something we should explore’ or ‘here’s an idea I have that might work out,’ they’re willing to lean into that. Same thing with faculty members.”

Brekke describes the partnership as a program that is unique in its place-based approach to reconciliation and justice. His goal now is to focus on depth over breadth.

“How do you create not just the numbers but the rich engagements,” he said. “This coming year we are going to put significantly more energy towards community work-study.”

Students will be able to work 10 to 15 hours in a community organization instead of just spending two hours a week as most programs do now. Brekke acknowledges that the partnership has many moving pieces and projects. It requires great flexibility and creativity from himself, community partners, professors and students.

One of the newer ways students can choose to connect deeply with the community is through the Frogtown Urban Living Experience (FULE). For one school year, students living in the FULE house engage in close relationships with urban neighbors, participate in an internship in the community and learn about the implications of urban social structures.

Gracie Grussing, senior social work major at Bethel, lived in the FULE house this school year. She first became involved in the Bethel FSU Partnership during her freshman year when she did service-learning at Irresistible Grace. In the beginning, she felt uncomfortable in that space.

“It’s a black space, and they’re really passionate about having a place to process emotions,” she said. “And then you have two white girls from Bethel pop in. And they were very vocal about, ‘We don’t want you guys here,’ and I was like ‘Oh my god!’ It was really hard for me.”

But she kept showing up. After two years with lots of processing and breaking down expectations, she grew to respect the organization and appreciate the experience. She was exposed to real diversity and learned to connect in authentic ways.

“I came from a rural, white town, and then I came to Bethel which is still majority white,” Grussing said. “It is uncomfortable getting out into the community and especially for a lot of students at Bethel, we’re not super comfortable with people that live different lives than us. But the more you do it, the easier it becomes.”

This year, as a senior, she was able to live in the neighborhood she had spent time growing and working in. As Brekke’s work-study student, her responsibilities included meeting with community leaders, attending peace celebrations, participating in an urban farming group and connecting Bethel students to the community.

The Frogtown community members have always been, and continue to be, a driving force in the partnership. Melvin Giles, community organizer and social justice leader, is a name and face you can’t miss when talking about the partnership.

“I think the life of the partnership takes on an eb and flow,” Giles said.

One of the strengths of the partnership is the way it helps challenge and push Bethel in certain directions. He said right now the way Brekke models how to be present in the community — creating relational treasures rather than the superficial stuff – has deepened this service- learning partnership.

“It has a lot to do with leadership,” Giles said. “Right now we have a white guy who is anti-racist leading, so it’s going pretty good. It helps keep Bethel on track.”

Carson said she thinks Bethel is ahead of the game in terms of community engagement, but there is always room for growth.

“I think there are lots of ways that community engagement hasn’t nearly reached its full potential,” Carson said. “The things that Tanden, other professors, and community leaders have brought to Bethel have definitely pushed us a lot farther than other schools. But in the grand scheme of things, I think there is a lot more to be done.”

0 comments on “What it takes to make a partnership”