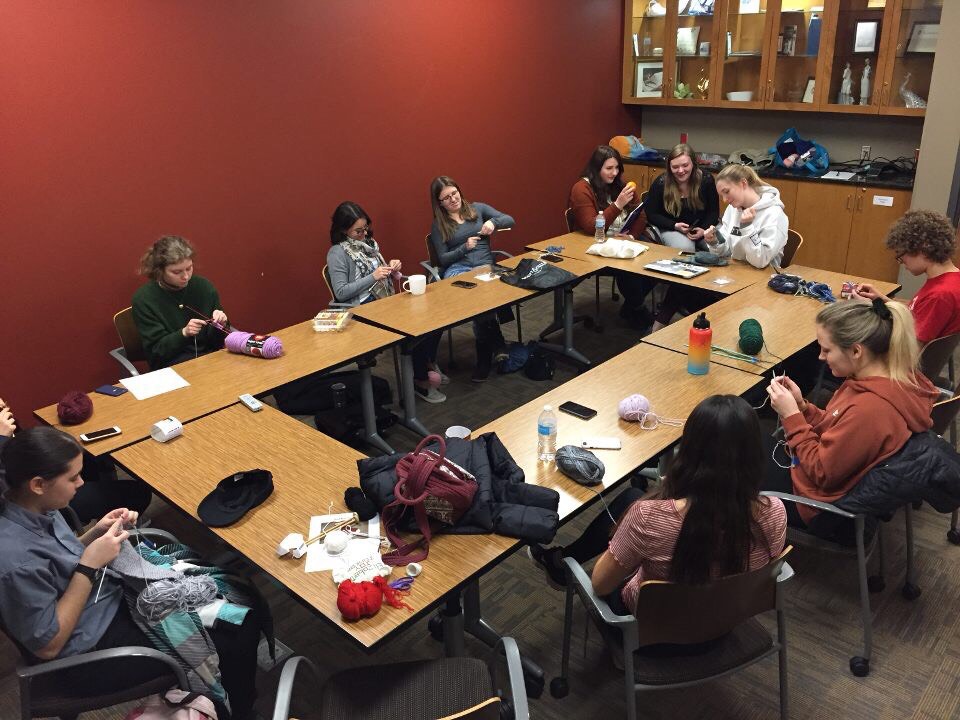 Roommates loved their quiet evenings knitting in Nelson Hall. Now, they share it with their fellow Bethel students.

Miranda Sullivan, a senior at Bethel University, looks forward to Wednesday nights each week. She can forget about the chaos, stress, and hours of homework that come with being a college student. She can lie low and let her worries be worked out with a simple needle and thread.

Sullivan and her co-leader, Elizabeth Jonker, walk into HC241 and flip on the lights. They know that the next few hours will be filled with laughter, community, and knitting projects. Stressed Bethel students can find these two there every week from 6 to 8 p.m..

Since last October, Sullivan and Jonker have co-led the club together, but it was an idea that came to life in their suite in Nelson hall.

“We were roommates last year and Elizabeth would knit baby hats while we watched TV,” Sullivan said. “I told her I want to learn how to knit! I love babies!”

Jonker has been knitting since she was 7 years old.

“I told my sister my New Year’s resolution was to learn how to knit and she taught me that night,” Jonker said.

From there, she joined her local 4H club and knit projects to be entered in the fair. Now, Jonker enjoys teaching fellow Bethel students to knit, just as her sister taught her.

Their other roommate, Ellie Sammon, suggested the idea of the club after watching them knit to the white noise of Gilmore Girls, Criminal Minds, and Youtube tutorials in the background. They thought it was an idea worth carrying through: “Unraveled.”

“Elizabeth came up with Unraveled,” Sullivan said. “We love the worship song ‘No Longer Slaves,’ and our name is inspired by the line, ‘You unravel me, with a melody.’ Now, we play that song at every first meeting of the semester.”

While Unraveled has about 10 faithful members, it also has support from outsiders.

When the club started, Sullivan posted on her personal Facebook account that she was starting up a knitting club at her school, and would appreciate donations from friends.

“I had people dropping supplies off at my house for three weeks straight,” she said.

Because of these donations, Unraveled is able to function without any expenses while providing knitting materials for anyone who chooses to attend.

Unraveled has been a club at Bethel for nearly a year, and if it’s up to Sullivan and Jonker, they won’t be going anywhere anytime soon.

“I run around in my classes and say, ‘Join knitting club!’ It’s kinda nerdy but I don’t care,” Sullivan said.

If interested in joining in person or virtually, email Miranda Sullivan or Elizabeth Jonker to get information on how to RSVP.

0 comments on “The birth of Unraveled: from a hobby to a club”