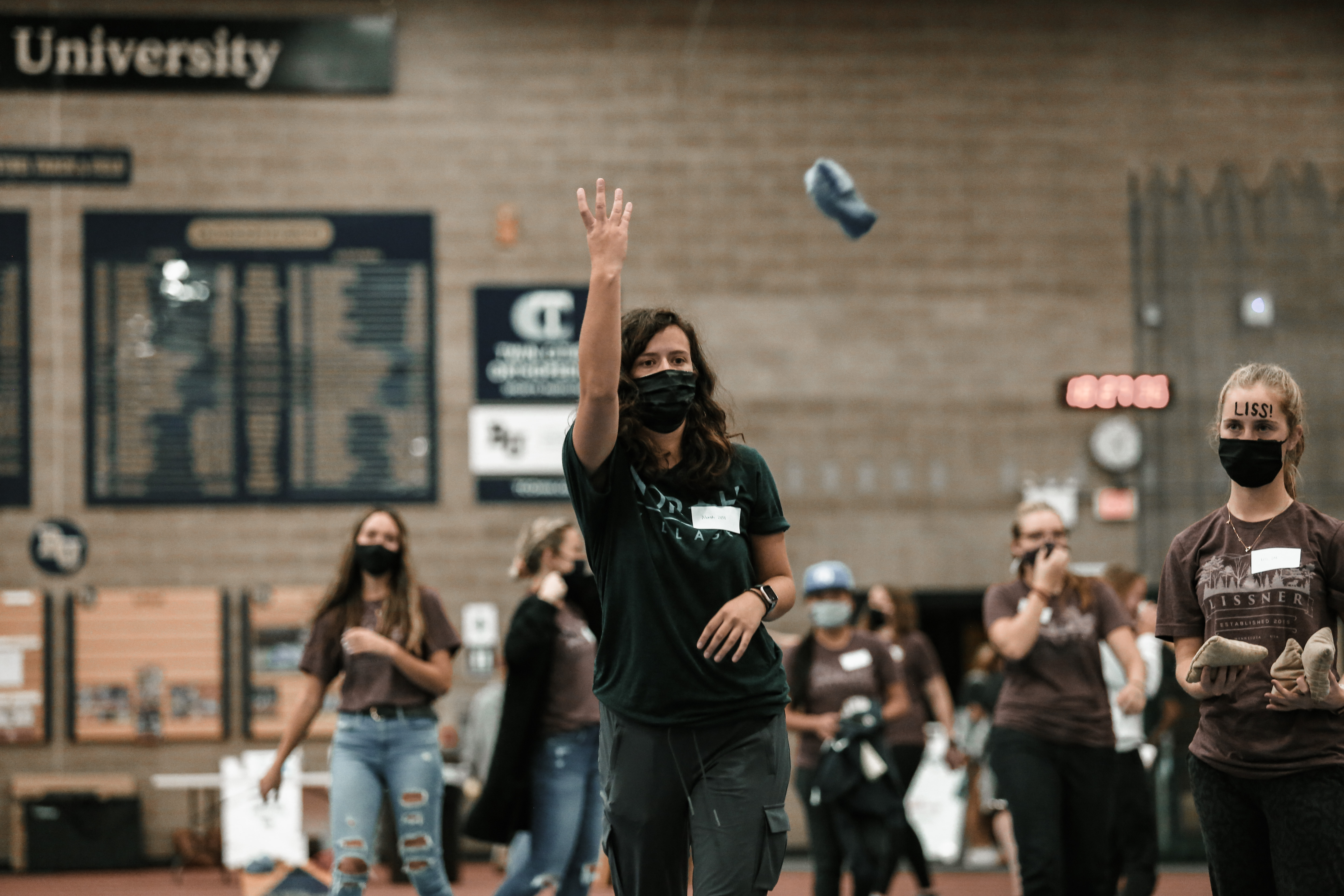 For the first time in homecoming history, Bethel women competed in cornhole after Bethel men showed their skills on the dance floor Thursday night.

“Eye of the Tiger” blared through the speakers at the Sports and Recreation Center as the women of Bethel University took their turn at winning points for the homecoming cup Thursday night.

The first session of teams started walking in at 7 p.m. to gear up for the classic Minnesota game; cornhole. The competition replaced other sports events that would have happened throughout homecoming including dodgeball, tug-of-war and powder puff flag football–a tradition where women from each class battle it out on the football field.

In the past, powder puff teams were split by class so the event did not count towards the homecoming score. The cornhole competition gave Bethel women a chance to add points to the scoreboard. The prospect has drawn in many teams from all the dorms throughout two sessions, filling the SRC while compliant with COVID-19 regulations.

Junior Kayla Hokanson played for Heritage on Thursday night. Along with earning points for her dorm, Hokanson bonded with her teammates, who happened to be her roommates as well: Cortney Hokanson, Kylie Bergman and Kendal Briscoe. While they were upset about powder puff being canceled, the roommates looked for a way to be involved with homecoming, and decided to give cornhole a chance.

During the semifinals of session one, black Getsch shirts and gray Heritage shirts surrounded the court as fellow players and fans watched to see who would move on to the championship round.

By the third round of the match, each team had won a game each. Jumping up and down, one Getsch fan held a yellow sign that said: “Go Getsch girls” in black calligraphy. On the other side of the court, a Heritage fan waved a whiteboard while walking back and forth across the court to let the players know how many points they needed to win.

Suddenly, cheering broke out. All the competitors rushed into the center of the court cheering and hugging. Heritage won. In all the commotion an iPhone with a blue case lands on the ground. Nobody noticed.

“[Our] key to success was the fans support and cheering,” Kayla Hokanson said.

Hokanson and her team waited as the second session of cornhole commenced and finally ended two hours later with North Village crowned victor of session two, clinching their spot to play Heritage in the championship. North beat the commuter team 2-0 and after a post-game interview with B-ESPN on Bethel Student Government’s Instagram stories, the championship game is underway.

Round one went to Heritage. Then in a close overtime game North tied it up 1-1. Everyone gathered into the middle of the room. Student Activities workers set aside tearing down the event, for now. Heritage fans wrote “Go HERITAGE!” on paper towels to encourage their roommates. Shortly into game three, Heritage lead 11-0 and the fans already began to celebrate.

Finally, Heritage reached 13 points exactly, with no penalty for going over. Once again, screaming fills the room as all the Heritage supporters swallowed their team on the court. The fan with the whiteboard got light blue Gatorade dumped on him. In the center of it all, Hokanson’s Heritage team ended the game as they started it, huddled in a circle, together.

0 comments on “Cornhole brings dorms together”