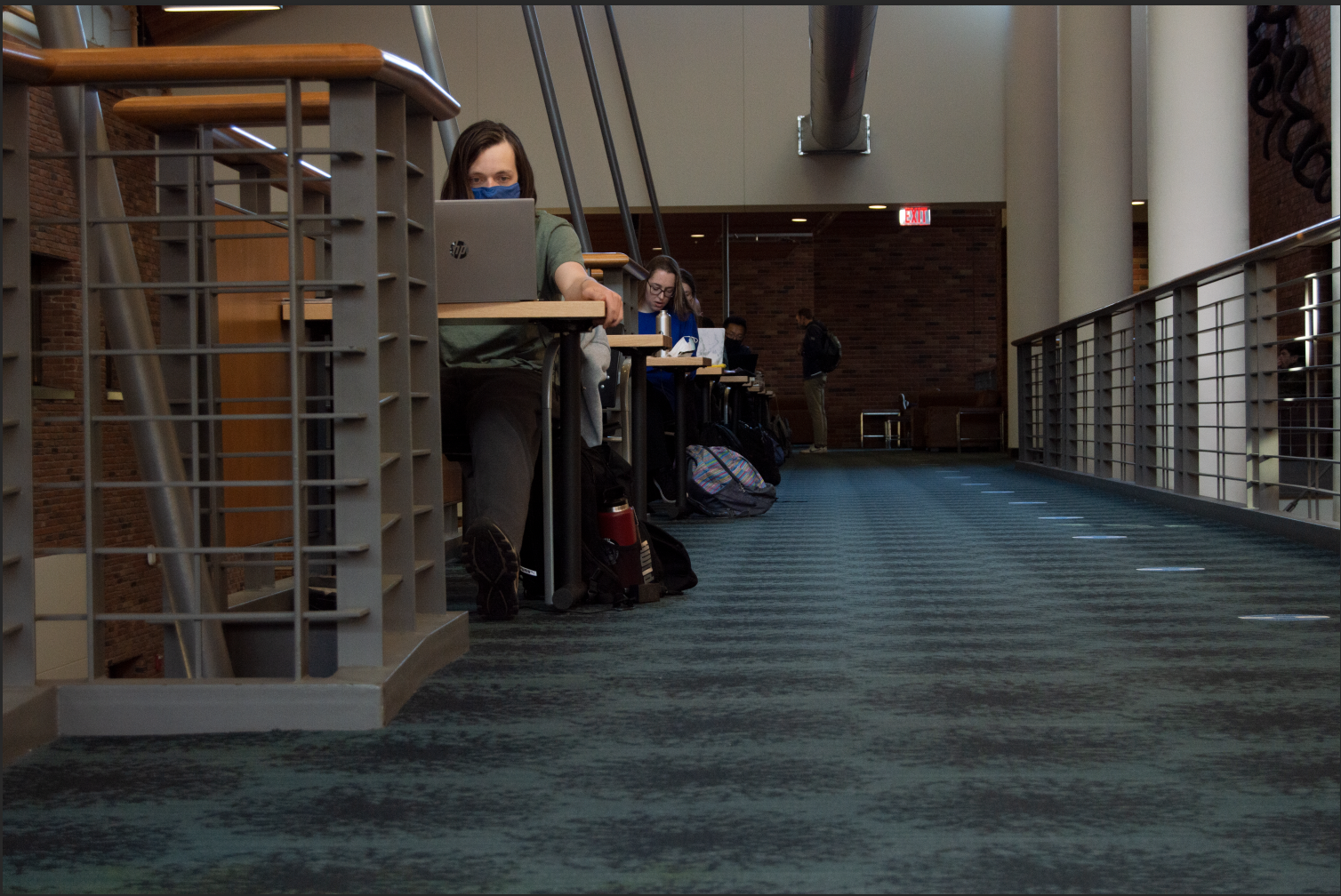 Political divisiveness, on top of Minnesota nice, during a pandemic makes an already quiet Bethel campus during the past elections even quieter this election season.

Louden Johnson-Rusco helped his grandparents unpack their vehicle, hauling their hunting rifles and supplies for a hunting trip to Leech Lake in northern Minnesota.

Johnson-Rusco wished his family could have Thanksgiving together as usual with his stepfather’s side of the family, where the older relatives would laugh and tell stories, and the younger relatives went off to hang out. But this year, his relatives would be stuffed with tension instead of turkey. Politics had divided his family, so much to the point that they won’t celebrate the holiday together this year during election season.

He recalled how divided his family had become for this year’s presidential election. His stepfather isn’t planning to vote, which made his grandmother so upset that she almost took him out of the will.

“I don’t like either of the candidates, the kind of person they are,” Johnson-Rusco said. “I can’t settle for one of them…. I should want to vote for someone I’m confident in.”

Johnson-Rusco’s lack of faith in the candidates and his family turmoil is why he decided not to vote during the 2020 presidential election.

According to Moore, people in their teens and twenties are the lowest voting percentage group. For many in this group, this is their first election, and they may feel difficult to identify with two candidates who are far from their age group — Trump being 74 and Biden being 77.

Studies have shown that with more education, students may vote more often; however, this doesn’t seem to be the case among Bethel students. There is a considerable lack of student action groups dedicated to partisan causes on campus.

Bethel students may have plenty to worry about: classes, surviving COVID-19, campus life, etc. But their disengagement from politics may be contributing to the lack of political discussion on campus.

“I think people are so sick of seeing it on the news and social media. It’s better to have these discussions in person, where people tend to be a lot more respectful,” said senior economics and finance major Alex Paul.

When Christopher Moore started at Bethel in 2007, he expected more political debates in class, especially with the election season between Barack Obama and John McCain in 2008, but he was surprised.

“I do see this as a pretty politically quiet campus,” he said.

Moore said Midwesterners typically are conflict-avoidant, so the students are more likely to make political conversations with those who they trust are going to vote similarly.

“We’re more likely to have destructive conversations when we’re doing so from a position of ignorance,” Moore said.

In political science courses, Moore said he avoids starting debates. His goal is to educate rather than argue. He encourages his students to ask questions about public policies that directly impact them such as tuition-free college. Moore is spending more time discussing politics in his senior capstone course, looking at features of nationalism and populism and the rise of political polarization in the US.

For political science professor Matthew Kuchem, he said his students shifted uncomfortably in their seats whenever a student brought up a stronger opinion on public policies such as healthcare or police reform.

“I think a lot of students care quite deeply about social and political issues…. But a lot of people are just sick of politics; it’s so toxic,” Kuchem said.

For other students, if their classes don’t talk about politics and election, they don’t usually engage in political conversations.

“One prof is offering extra credit when we come up with our ‘I voted’ sticker,” said junior physics major Marit Engevik. “I still have to do some research…. Most of my friends are science majors, who aren’t as involved in political aspects.”

Johnson-Rusco’s Introduction to Wellbeing course talked about debate and dialogue, but he said he has a feeling that it doesn’t usually happen. He hopes that people will be able to engage in political dialogue peacefully more often because he has witnessed how his aunts and uncles can tear each other down over their views.

“It’s sad that people nowadays can’t let people have their opinions without labeling each other,” Johnson-Rusco said.

Moore said he hopes that once COVID-19 has somewhat settled, people can come back together and collaborate once again.

“I would say that I wish people would vote because I wish they’d be politically engaged,” Moore said. “And I think that if you’re thinking critically about choices, as long as you have a choice, you should exercise your option of helping make a choice.”

0 comments on “Political silence at Bethel”